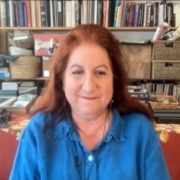 Suzy Thompson has been a great promoter and performer of a variety of folk music genres. We were fortunate to have her agree to be interviewed by FolkWorks Board member Monika White.  The interview took place October, 2021

In 2003, she released her first solo CD, No Mockingbird which features blues songs and old-time fiddle rags. Her follow up CD on the Arhoolie label, Stop & Listen, came out in 2005.

Thompson currently records and performs in a duet with her husband and longtime musical partner, reknowned flatpicker Eric Thompson, with the Aux Cajunals (a Cajun/blues band, in which she plays Cajun accordion as well as fiddle and guitar), and with the Thompson String Ticklers.

Thompson discovered the music of Bessie Smith, Sippie Wallace, Memphis Minnie, Victoria Spivey, and other classic blues moaners in the winter of 1975, when a friend of a friend of a friend stored his LP collection in her room. She began learning and performing some of this early blues material, accompanying herself on the guitar. The next year, she formed the Any Old Time String Band, an all-woman quintet with a repertoire that included classic blues, oldtime country music, and Cajun music.

In 1976, her interest in Cajun music was sparked by seeing the Balfa Brothers perform. She traveled to southwest Louisiana, receiving an NEA Fellowship in 1980 to apprentice with Master Cajun Musician, Dewey Balfa; she also studied with Cajun fiddle legends Dennis McGee, Cheese Read and Wade Fruge. The 1980s saw Suzy touring and recording with the Blue Flame Stringband and the Backwoods Band, appearing on the Prairie Home Companion radio show, and touring throughout the U.S. and in Europe.

Thompson’s vast repertoire of quirky old-time country tunes and songs was learned from rare field recordings and old 78s, and she is particularly adept at the ragtime and blues-influenced playing of hillbilly musicians of the 1920’s and 30’s, such as the East Texas Serenaders, Fiddlin’ Arthur Smith, Doc Roberts, and others of that ilk. Thompson’s passion for old-time music caused her to start the Berkeley Old Time Music Convention, which has become a four-day celebration attended by oldtime musicians who travel to Berkeley from all over the country.

In 1994, Thompson represented the U.S. on a Masters of the Folk Violin Tour in Scotland and England. In addition to performing, she has been an instructor at many festivals and music camps, including Centrum’s Festival of American Fiddle Tunes and Port Townsend Acoustic Blues Festival, Augusta Heritage Cajun-Creole and Old Time Weeks, Californa Bluegrass Association Music Camp, Port Townsend Festival of American Fiddle Tunes, California Coast Music Camp, Puget Sound Guitar Workshop, and Lark In the Morning.