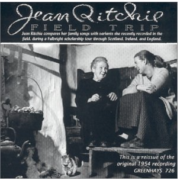 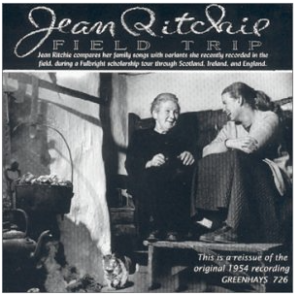 As I wrote last time, my husband Steve Rankin and I are preparing for a trip to Ireland later this month.  In anticipation of the journey, I’m reviewing songs of the  British Isles, whether English, Irish or Scottish.

One of the best known and best loved ballads that came to this country from the immigration of those peoples during the 18th and 19th centuries was the ballad known widely as “Barbara Allen.”  As Jean Ritchie discovered in the early 1950’s when she did her Fulbright Scholarship research throughout the British Isles, versions of this song were found in Scotland and Ireland.  She recorded the artists she met, Jimmy Stewart in Scotland and Elizabeth Cronin in Ireland, and compared their versions with her own Appalachian version on her album “Field Trip.”  To hear the three versions of the tune – same story – same characters – rendered so differently in music and lyrics, was to witness the oral tradition at work – the handing down (and around) of songs through the generations and throughout the world.

The song’s name also shifted over time:  the song has been known throughout Appalachia as “Barbry Ellen,” and in many cases, I’m told, the families in the Southeastern mountains would often name their girl children after this song because of its popularity.  It was common to see the names Barbry Ellen Jones, or Barbry Ellen Smith on the school roll call.  Below is Jean’s version on the Smithsonian Folkways album “Classic Mountain Songs.”

So, slow-ly slow-ly she got up and
Slow-ly she came a nigh him
And all she said when she got there
Young man I believe you’re dyin’

Oh, yes, I’m low and very low
And death is on me a-dwellin’
No better, no better I’ll never be
If I can’t get Barbry Ellen

Oh, yes, you’re low and very low
And death is on you a-dwellin’
No better, no better you’ll never be
For you can’t get Barbry Ellen

For don’t you remember in yonder’s town?
In yonder’s town a drinkin’?
You passed your glass all around and around
And you slighted Barbry Ellen

Oh, yes, I remember in yonder’s town
In yonder’s town a drinkin’
I gave my health to the ladies all around
But my heart to Barbry Ellen

He turned his pale face to the wall
For death was on him dwellin’
A-dieu, a-dieu you good neighbors all
A-dieu sweet Barbry Ellen

Oh, mother, oh, mother, go make my bed
Go make it both long and narrow
Young William’s died for me today
And I’ll die for him tomorrow

Oh, she was buried ‘neath the old church tower
And he was buried a-nigh her
And out of his bosom grew a red, red rose
Out of Barbary’s grew a green briar

They grew and they grew up the old church tower
Until they could grow no higher
They locked and tied in a true lover’s knot
Red rose wrapped around the green briar.

From the album “Field Trip”

Here is Jimmy Stewart from Scotland with his “Barbara Allen.”

And from Ireland, here is Elizabeth Cronin with her “Barbara Allyn.”

As I mentioned above, I’ll be out having an adventure for a few weeks, so this blog will be taking a short hiatus until the middle of August.  See you then, thanks for reading, and I’ll see you next time for all things Folk Diva!

VOICE NOTES:  A FOLK DIVA’S GUIDE TO THE GALAXY Number 31