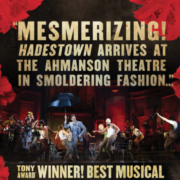 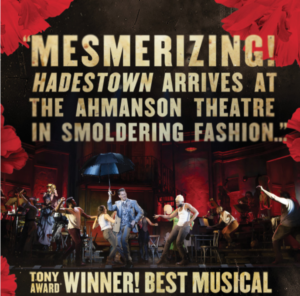 I thought that the May 1 blog post could be in the form of a recommendation for a great piece of musical art, the national touring company of the Tony award-winning stage musical Hadestown with original music by singer/songwriter Anais Mitchell.

This dynamic and truly innovative theatre piece itself is truly a “rags to riches” saga, one that evolved over a long gestation and creation period of over thirteen years in development.  In her writing, Mitchell has created a fantasy based on Greek mythology, with the main characters the archetypal names we know from history:  Orpheus, Hades, Persephone, Eurydice, Hermes, the Fates, and the Chorus (typically used in classical theatre as the voice of the people).  Since the incredible success of this piece on the Broadway stage in 2019 (winning the Best Musical Tony and Best Original Score, with the soundtrack album winning the Grammy that year for Best Cast Recording), the music and its powerful originality has been topics for writers and critics.  With a fabulous, on-stage band/orchestra of acoustic instruments, it is a folk music dynamo, with powerful performances on display from musicians as well as actor/singers.

I want to share this with you, so I will use language from the opening night program to hopefully peak your interest.

Before there was a musical, there was a song.  Anais Mitchell was just beginning her career as a singer-songwriter when she was struck with almost divine inspiration.  ‘The melody of ‘Wait for Me’ dropped out of the sky’ Mitchell said.  ‘It came with some long-lost lyrics that seemed to describe the Orpheus & Eurydice myth.’ Another early addition was ‘Why We Build the Wall,’ which Mitchell wrote all the way back in 2006.  These songs began to take shape as a musical later that year as a DIY community theatre project in Vermont.  Mitchell continued to write songs, recording and releasing the Hadestown album in 2010.

Another interesting fact for us in Southern California is that Los Angeles’ own Doug Baker of the Center Theatre Group was prominent in the support and evolution of “Hadestown”’s journey from the microphone to the stage.  Baker spent years gathering theatre professionals and fundraisers to further the progress of this great work of performance art.

Hadestown runs at the Ahmanson, Doug Baker’s own theatre, until May 29th.  Do yourself a favor and go see this brilliant piece of folk-music driven theatre.

Here’s a great sizzle reel for the show:

See you next time for all things singing for Folk and Americana styles!

________________________________________________
Award-winning recording artist, Broadway singer, journalist, educator and critically-acclaimed powerhouse vocalist, Susie Glaze has been called “one of the most beautiful voices in bluegrass and folk music today” by Roz Larman of KPFK’s Folk Scene. LA Weekly voted her ensemble Best New Folk in their Best of LA Weekly for 2019, calling Susie “an incomparable vocalist.” “A flat out superb vocalist… Glaze delivers warm, amber-toned vocals that explore the psychic depth of a lyric with deft acuity and technical perfection.” As an educator, Susie has lectured at USC Thornton School of Music and Cal State Northridge on “Balladry to Bluegrass,” illuminating the historical path of ancient folk forms in the United Kingdom to the United States via immigration into the mountains of Appalachia. Susie has taught workshops since 2018 at California music camps RiverTunes and Vocáli Voice Camp. She is a current specialist in performance and historian on the work of American folk music icon, Jean Ritchie. Susie now offers private voice coaching online via the Zoom platform. Visit Susie’s Website HERE

VOICE NOTES:  A FOLK DIVA’S GUIDE TO THE GALAXY Number 26