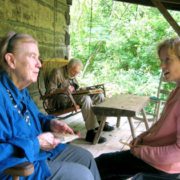 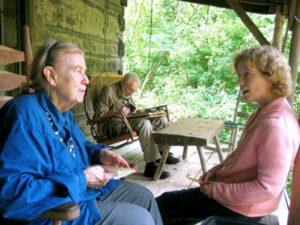 The Art of the Unaccompanied Voice #2

As I wrote last time in the first installment of this two-part series, I had in my career the incredible opportunity to learn from one of America’s greatest folk musicians – composer, performer, author and scholar, Jean Ritchie was my friend.  I was so fortunate to get to know her as mentor, teacher, guide and inspiration.

If you’re familiar with the legacy of music and scholarship that Jean left behind for us, you know that the wealth of scholarship and shared music around Jean and her own incredible career as an artist is vast.  Today’s blog is a continuation of last time’s discussion on one aspect of her work that affected me profoundly as a singer, and that was the skill of a capella ballad singing.  As I wrote last time, there are certain challenges around this skill, mechanical and artistic.  I’ll be briefly touching on both aspects in this two-part blog post.

In the first part, we talked about mechanics, i.e. breath management, pitch, word rhythm and phrasing.  In this part two, I’ll discuss the art of “decoration,” grace notes, melody alterations, the difference between influence and imitation, and personal connection to your songs.

The art of “decoration” is the process of experimenting with simple grace notes which are added to the main melody.

You can hear clearly in this remarkable performance by Elizabeth Laprelle the subtle and meaningful use of decoration as a kind of voice break, and this use of the decoration conveys emotion, texture and cultural context.

There are also options for experimentations with the melody itself.  Though this performance, again from Elizabeth Laprelle, is not specifically a capella, I use it to demonstrate how melody can vary from verse to verse in subtle ways.

And for fun, and more contrast, here is Judy Collins’ recording of the same song.

So:  eyes closed, or not?  In some circles, it can be controversial about a singer singing with eyes closed.  Audiences could find it off-putting, but i had some good advice from Jean on this topic.  Jean said that she closed her eyes when doing ballads in order to help her imagination go to the place of the song, the scene or environment, and simply to help her concentrate.  She noted that sometimes seeing the audience reactions could be distracting.  She said she was happy that the audience was there, but she wanted the ability to go into her own world of imagination.  We’ll talk more about this idea in a minute.

Influence or Imitation?  it’s important to recognize and be aware of whether you’re imitating another artist or being influenced by them.  Check yourself here at the door of authenticity regarding your own expression.  Do the song your way.  It’s reasonable to be influenced by other artists, we’ve all been, but it’s an empty exercise to do an impersonation or an imitation.  Pour yourself into the song and feel where the story takes you.

This is a perfect segue into the topic of personal connection – it’s important that you try, through your empathy, to understand and connect to the song’s story and the characters in the story.  However, the rules of the road for mountain balladry state that we as singers do not “act it out” emoting and indicating empty passions.

In doing research on the ballads, I found something interesting about this topic.  James Francis child’s research and publishing is still the go-to authority for the history of American balladry.  Much of this balladry came from British broadsides, a common way that songs were shared.  I read that Child’s definition of a ballad was a song about an event, without adding judgment or opinion.  That approach removed the sense of the broadside’s being cheap or “vulgar” – full of political or social opinion “to sell newspapers.”  The trad ballad was not these things, and this perspective could have led to the delivery of these ballads being neutral in emotion.  I believe it leads to their integrity of emotion and intention.

So:  experiment with grace notes, melody alterations, word rhythms, and phrases.  Be yourself and interpret the song as it moves to you.

The power in the art of unaccompanied singing is to go deep for each singer and the expression is a powerfully profound experience, one which each singer should have a chance to know.  The truth is that it’s personal, and as an a capella singer, the song moves you to sing it as you feel it and want to “say” it.  Then you let your spirit lead you to express it with your voice, the true sacred harp.

And from the source ~

“No one person is the expert on how traditional songs should be sung – there are as many different ways as there are trad singers.  The thing is that some trad singers’ styles and sound have endured more than others – a matter of a wider (mass) appeal which endears these few to the bigger audience…for me it is true also, that the trad singers with the lower and even least mass appeal are just as important as those who become well-known and/or famous.” Jean Ritchie

See you next time!

VOICE NOTES:  A FOLK DIVA’S GUIDE TO THE GALAXY Number 13