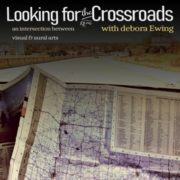 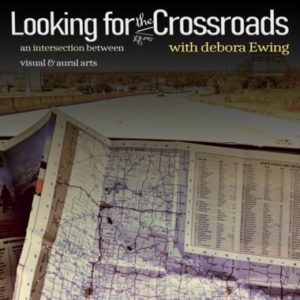 When I call myself a polymath, I mean I study everything. I jump down every rabbit-hole. I’m convinced that each journey, academic or artistic, is really after the same truth, that our journeys cross each other several times. I’m looking for other travelers at the crossroads. Songwriting is a new endeavor for me, so I went looking for mentors who were songwriters and also poets.

I was looking, namely, for Poet Lariat Charles John Quarto.

Any emails sent through CJQ’s website, though, are answered by Steve Gillette, Charles John’s writing partner of many years. SG suggested I write a letter to Charles. Then he told me about his own website: About the Song. I found so much good there – it’s really a publicly available songwriting workshop.

A year later, when I saw SG’s picture on a wall at The Birchmere, I took a picture of it and emailed him: “Looky what I found.” So we got talking again.

Steve Gillette and I are both fans of Carl Jung, for starters, if fan is the right word. As many conversations unfolded through emails, I gave SG a breakdown of why I think Wichita Lineman is a love song about processing grief. He directed me to a TedTalk by Daniel Sherrill which explored why, perhaps, people don’t connect emotionally with the concept of climate change. We thought a love song to climate change would be a good idea.

I connected with Tina Ross near the beginning of 2020, the year we’re still in (by my count it is now 2020.2.) Tina’s played Cantina Navarro, an annual hotspot during Folk Alliance International, even when it’s virtual. She’s played events alongside names like Severin Browne, Christine Lavin, and Tom Chapin. Her music has depth and pith. Or pith and depth. But my favorite thing about Tina is that she’s a huge fan of my artwork. We fangirl each other. So I had to tell her what I thought I was up to.

Deb: Do you know who Steve Gillette is?

Tina: Of course. I have his book.

Deb: I seem to be writing a song with him…

Proof soon came that I was indeed writing a song with him, in an email with attachment labeled “demo.” Oh, hey. Lookit that. We kicked ideas back and forth until SG, the more experienced of our collaboration, felt we had something solid. His partner, Cindy Mangsen, weighed in, too. She contributed piano & vocals to our demo.

When Tina heard ‘Home’, the song written by Stephen Gillette and myself, she asked to cover it. SG created a chord sheet I could share with her.

Tina and had the following conversation via Facebook messenger:

Deb: Tina. He’s still tweaking the song! Steve ****ing Gillette! So it doesn’t matter what the medium, we never outgrow this tendency.

Tina Ross: It’s so hard to know when a song is done.  The recording sounds nice!

Deb: it’s been a lot of learning for me.

Deb: Yeah it is. I got to observe the whole process from someone who’s been doing this since I was born (1965.)

Tina Ross: He is a gem!  So well respected and a songwriter’s songwriter!

Deb: I really look forward to meeting him and Cindy in person. The piano is her.

Tina Ross: So did you write all the lyrics?  Tell me what the breakdown was.

Deb: It was a process of evolving conversation, such that I barely realized it happened. The first verse is very blended – I can say that “shock and awe has faded to gray” started with me. The concept “what will we do when we can’t come home” is mine. He seemed married to the rest of the chorus from the outset.  I didn’t like it much at first and kept trying to change it! He would try some of my ideas, but always revert back to this. (editor’s note: he was right. I very much approve.)

Also Deb: HEY IS THIS AN INTERVIEW?

Tina Ross: Sometimes one person writes the lyrics and one music. But it sounds like it was a collaboration.

Deb: Very much so. The 2nd verse is all him. I had 2 other verses lined up; my 2nd was a young woman with 2 babies…

Tina Ross: Use that for another song. Nothing is ever a waste.

Deb: …and that was the point at which Steve Gillette told me that we may well be writing 2. I think we have 3. He said he and Charles John often found they were writing two songs. But he found inspiration, and emailed me a little of it. He was thinking a lot about endangered species and tangible effects of climate change. I had a few ideas there – like flowers blooming out of season – but the story of the Clarion Wren was very strong with SG.

I had suggestions on moving the words around because the rhyming pattern was completely different (from the first verse) and that irked me, but he found an excellent compromise. There’s a lot of play with near-rhyming and internal rhyme that we discussed.  With my other collaborations I have supplied lyrics and left it to the singer to change what they wanted to change. This was more interactive. I’d say I offered only contention to the 2nd verse, which is often helpful in creating.

Tina Ross: Every moment matters. What you say leads to someone else’s ideas.

Deb: EXACTLY. Just existing matters. You may not be familiar with Cambridge mathematicians Hardy and Littlewood. They published several papers together, and they had 4 axioms they followed to do so. I have the axioms posted on my wall because I love them so much. Remember – these guys were using actual mail.

Tina Ross: I will look for that.

Deb (obliviously transcribing a sign hanging on her wall): 1. it didn’t matter whether what they wrote to each other was right or wrong.

2. there was no obligation to reply, or even to read, any letter <—-this is the important one, because just having a focus for your thoughts shapes them even if the other person never hears them. I have a song I’m working on about that: Unsent Letters.

Deb (continuing obliviously): 3. they should not try to think about the same things.

4. to avoid any quarrels, all papers would be under joint name, regardless of whether one of them had contributed nothing to the work.

Tina Ross: This is co-writing, and life, in a nutshell! Or any collab.

Deb: YES totally. Yep. this is an interview. I want to use it on my blog, if that’s okay. That means I want to ask YOU questions: what struck you immediately about this song we call Home?

Tina Ross: Ok from memory: The gestalt of it!  So first the feel of the words fitting well with music and the sound of it. The first line set a scene that I saw. Then when the woman came in I was intrigued. And the concept or question of having gone too far is compelling. Then lots of other points in the song pulled me in.

Deb: ooooh, you said Gestalt – one of my favorite things! I can’t remember if I told you our original idea was to write a love song that helped people connect with climate change.

Tina Ross: Well, a song is a great way to connect someone emotionally with any topic!!

Deb: Yes. We humans will fall for it every time!

Deb: Since we’re here, what was your biggest fangirly moment to date, as far as playing with or next to or on the same bill as someone?

Tina Ross: Well Bonnie Raitt once gave me a shoutout during a concert. Does that count?

You can catch Tina live any Sunday on Facebook here: Tina Ross Music.  I highly recommend subscribing to her YouTube channel, where you can hear Artemisia whenever you like. It’s gorgeous. You’ll be back. Tina’s debut album, While I’m here, is available on her website: TinaRossMusic.com.

Tina did cover ‘Home’ – twice – including this inspired rendition on ukulele. SG creeped into Tina’s Sunday live stream on Facebook to hear it, but didn’t tell her how much he enjoyed it until after the show. He’s thoughtful like that.

As regards songwriting, start where I did, at About the Song, or where Tina did, with Songwriting and the Creative Process by Steve Gillette. It’s not just about songwriting, unless you consider that songwriting is about everything.

Looking for the Crossroads Number 1

About the Song 'Home' - a Conversation with Tina Ross