Looking for the Crossroads Number 5

Looking for the Crossroads - deb Ewing 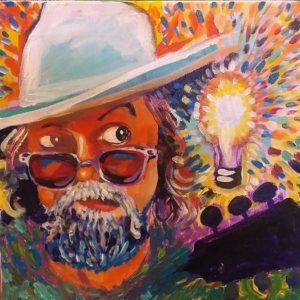 Studio and stage musician, artist, cartoonist, illustrator, writer Andy Chase Cundiff was born in Louisville, Kentucky to a military family. He currently lives in Amarillo, TX (is there another Amarillo?) and flies to Los Angeles (the California one) to do music shows with the 20-odd year endeavor called Andy Chase’s Thunder & Lightning Band. Texas loves Andy, and he reciprocates. “There are no finer people anywhere,” he told the Amarillo Globe-News.

me:  Why do you put yourself out there in music and also in paint? Are there other ways as well?

ACC: I feel that it is crucial to who I am. Nothing has ever been close to getting my attention like the arts. I have had dozens of other jobs, but always considered them secondary to the “real me”.

I put myself out there in visual art and music because it’s all I have time for. If there were 12 more hours in a day, I’d be involved in theater as well.

me: Why do you want to let me tell people about you?

ACC:  I would like to contribute, even in a minute way, to anyone’s joy in life. Whether it’s through something intriguing, amusing, amazing, whatever. The arts do that for me, I’d like to share.

me: What did you want to be when you grew up?

ACC: Always saw myself as a painter. Always wondered why everyone seemed to mourn when I expressed that as a child. Also wanted to be a choral singer. I was in church and school choral groups from pre-K and it came as a shock to me in college that there were virtually no choral jobs. I just happened to discover pop music and got recruited for studio and band work as a fairly young person. I have played in the pop genres since then. Forty some odd years.

me: Tell me about the moment you know a new creative idea is coming to you: how can you tell whether it will be visual or aural (or other)?

ACC: Those new ideas are lifeblood to an artist! I believe that there’s “nothing new under the sun”, but still, the way a color tone, or music chord is juxtaposed to the next, or a fresh rhythm can be just like the big bang in your head. I typically get a little freaky until I can sketch, draw or record that idea in order to keep it in my head. It is always a good thing to carry a sketch book or a pad of some kind, but a lot of my work winds up coming from napkin scribbles*. The songs, to me, are harder to “catch”. Usually some turn of phrase, or colloquialism, or even the sound note pattern that makes me feel a certain way will be the catalyst. It is always exciting! Very frustrating when I can’t “get around to it”! 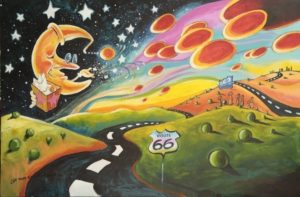 me: Do you ever create a painting and a song from the same inspiration, essentially telling the same story?

ACC: I think it’s all tied in to some degree. For instance, my “Route 66” series is about childhood, the dream of heading west on that old highway, seeing California for the first time, love of the road. The colors are impossibly bright, the moon and stars animated. I have a song, “Texas Under Your Wheels” that is very much in tune with the “Route 66” painting series. A little cartoony, a little swing-jazzy, and meant to be enjoyable in spite of the slightly sad nostalgic element.

me: It’s been my experience that creating art is a more solitary venture, where creating music tends to group people together. How has that worked for you?

ACC: I am a self-admitted hot dog, so I’ve painted, cartooned and caricatured in front of people. However, the concentration required to paint is normally better rewarded when I’m by myself. It’s a trade off sometimes. Caricatures are way more fun when everybody can watch and enjoy. As far as music-I do practice, but it’s a ton more fun when there are people to share with! 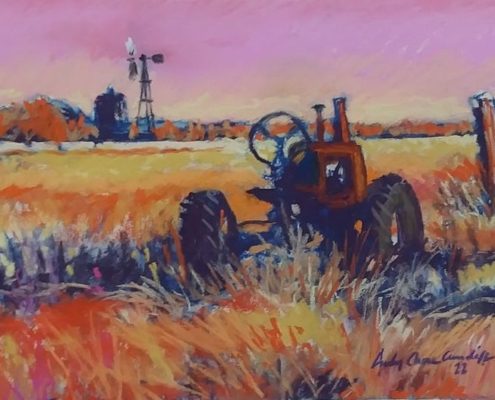 me: I’m told you also work in pastel. That’s a tough medium.

ACC: I am very much a beginner in the medium, but already love it! The key for me was a workshop with a great pastellist named Bethany Carter Fields. She’s on you tube. The thing with pastels was that, for me, I had to throw out every single principle I thought was applicable. NO blending at all! One key is is 400 grade sand paper. Each stroke is like a paint stroke, only one “load” per stroke. The other thing I learned is that it’s a rich kid’s sport! My friend just happened to give me a really great old set of pastels that he hadn’t used in 30 years. This, as it happened was part of a guitar trade!

me: Do you promote your art at gigs?

ACC: I do promote my art at gigs, when circumstances permit. Sometimes I just take a big fat canvas out and put it on stage with me without saying anything about it. Sometimes I ask the venue if they would allow me to hang some art. It has worked out pretty well, in my opinion.

* editor’s note:  NAPKIN SCRIBBLES! Those are a few of my favorite things…

Texas Under Your Wheels – Andy Chase Cundiff  live at Blue Sky in Amarillo, TX on 9.1.10; video courtesy of Nick Spuhler on YouTube.