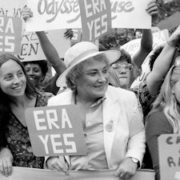 Yes, Virginia, There Is an ERA 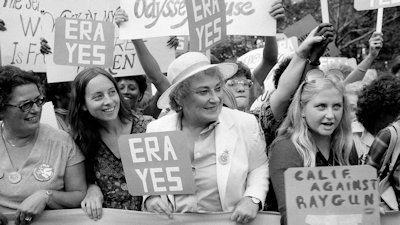 League of Women Voters Applauds Virginia for Ratification of ERA

RALEIGH, NC, January 15, 2020 – The League of Women Voters of Wake County (LWV-Wake) applauds the state of Virginia upon its ratification of the Equal Rights Amendment (ERA). Virginia is now the 38th state to have ratified the ERA, which meets the threshold for adoption of an amendment under Article V of the US Constitution…

“It is fitting that the 38th state [=¾ of 50 total states] has ratified the ERA in 2020, the 100th anniversary of both the 19th Amendment and the founding of the League of Women Voters,” says Sheila Denn, Co-Chair of the ERA Committee for the League of Women Voters of Wake County. “It is high time that women, who now make up more than half the workforce in the US, be treated equally under the law.”

Call it the Tom Paxton Amendment: Forty years ago Tom wrote Mary Got a New Job:

Guess where Tom lives? Alexandria, Virginia—so he can bust his buttons and sing out with pride; “Yes Virginia, There Is an E.R.A,” bringing to a full circle The Equal Rights Amendment first proposed in 1972— This will be the perfect capper to the Centennial of the 19th Amendment, which we passed in 1920, guaranteeing women the right to vote.

Seems pretty straightforward, doesn’t it? Unfortunately, there may be a catch—Catch 22. Five states have in the meantime voted to “rescind” their original approval—with changes in their own state legislatures—whether they can do that may be up to the courts to determine. Other states have imposed a 1982 deadline for passage which they claim has already expired—thus making Virginia’s recent vote moot—another matter which may throw it into the courts—since still other states claim there can be no such deadline. So one way or another it may be heading for the courts before Congress declares the 28th Amendment has passed. It may thus be premature to celebrate. But deep in my heart I do believe that We Have Overcome. I can’t imagine that the ERA will now be overturned.

P.S., With apologies to Francis P. Church, who wrote the New York Sun’s editorial reply to Virginia O’Hanlon on September 21,1897, who had written in to ask whether Santa really existed—“…Yes, VIRGINIA, There Is A Santa Claus….”

Ross Altman has a PhD in Modern Literature from SUNY-Binghamton (1973); belongs to Local 47 (AFM); heads up the Santa Monica Traditional Folk Music Club; writes for FolkWorks; Ross may be reached at greygoosemusic@aol.com

YES, VIRGINIA, THERE IS AN ERA