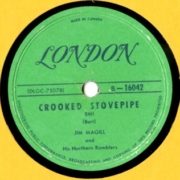 Crooked Stovepipe (or THE Crooked Stovepipe) is a Canadian Reel or Polka. While I usually consider this as a “Downeast” (Canadian Maritime) tune, the tune is found in repertoires of New England, Michigan, Missouri, Ontario (Toronto and Ottawa Valley), New Brunswick, Prince Edward Island. The key is G Major and it is most often played in standard tuning, AABB. Crooked Stovepipe is also the name of a dance performed to the tune, popularized in New Hampshire by the late callers Ralph Page and Duke Miller.  Here’s a video of Tod Whitemore calling the dance at NEFFA’s Ralph Page Dance Legacy Weekend, held every January in Durham, NH. Check it out!

Note Dudley Laufman and Bob MacQuillen in the band!!

Authorship of Crooked Stovepipe is usually attributed to Jim Magill, a fiddler from Toronto (leader of Jim Magill and the Northern Ramblers) but was most likely composed ~1932 by John Burt, piano player for George Wade and his Cornhuskers (another dance orchestra from Toronto). Jim Magill was one of the fiddlers in this orchestra for a time.

Here’s a recording (← click to play) from the 1930s by the Cornhuskers. Crooked Stovepipe begins at 1:30. Note how FAST they play this! 140 beats per minute the way I counted it. I am guessing that’s John Burt standing in the rear by the piano.

A little about the (78 rpm) recording and the band: George Wade and His Cornhuskers was an Ontario dance band and radio act active from the late 1920s to the 1950s. In this recording, “Warm Stuff” is sometimes known as “Pigtown Fling” or “Stoney Point”. “The Crooked Stovepipe” remains an Ontario fiddle standard (a Maine standard too!!!) Over the years the fiddlers in The Cornhuskers included Jim McGill, Jean Carignan and Tommy McQueston (among many others). George Wade and the Cornhuskers was a highly influential large band, one of the few recorded in Canada by RCA in the decade prior to the onset of World War II. The most famous member of Wade’s outfit was Quebec fiddler Jean Carignan, who Wade hired off the streets of Montreal where he used to play during his lunch hour break from a job as a cobbler’s apprentice. It was said that the band was similar in makeup to jazz big bands, yet played for the country crowd. One well-known Canadian artist who was influenced heavily by Wade’s band was Don Messer, who fashioned his own concept and his group the Islanders after attending a gig by Wade and the Cornhuskers.

Crooked Stovepipe has been recorded by other Canadian bands over the years (and American bands as well). Here are just a few:

Here’s a recording by Don Messer and his Islanders:

Moving on to an LP, probably in the 1960s we have Ned Landry and his New Brunswick Lumberjacks

“Bowing the Strings with Ned Landry.”

Finally Crooked Stovepipe was a Maine Fiddle Camp tune back in 2008 and here’s a recording by George Fowler and Doug Protsik.

Here’s the original sheet music published in the 1930s WITH piano accompaniment! 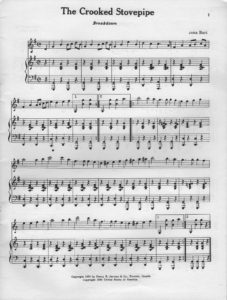