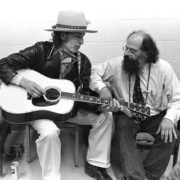 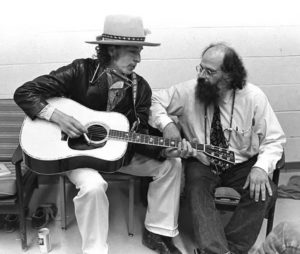 The friendship between the Beat poet Allen Ginsberg and folkie-turned-rock-celebrity Bob Dylan is well known. They went so far as to write and record songs together. As Far Out Magazine put it:

“1971 In a smoky November studio session, beat poet and Gay rights activist Allen Ginsberg was sat alongside the enigmatic Bob Dylan to record three songs… The most famous of these songs credited to the poet and Dylan was ‘Vomit Express’ but the real touchpaper to the flame was the song ‘Jimmy Berman (Gay Lib Rag)’. Co-written by the pair, the song, which had lyrics improvised by Ginsberg as the pair recorded… “

While the relationship with Dylan was special and long lasting it was only the tip of the iceberg of Ginsberg’s and the other Beats influence on the folk and folk rock performers, but it all began much earlier.

Much of the music and poetry of the Beats and the Folkies is built on African American foundations. The blues underpin both jazz and folk music and the blues and gospel are the expression of the African American experience. Jazz, particularly bebop, was an important inspiration to the Beats. Without a Charlie Parker there might have been no On the Road from Kerouac. Without the rhythms of the slaves, the chain gangs and the work crews Ginsberg’s poetry and much folk music would have had a different cadence.

The Harlem Renaissance elements of jazz and literature were a catalyst for the Beats and the Folkies. Langston Hughes created performance poetry by fusing it with jazz and the Beats embraced and built on that foundation.

Harry Belafonte is an often overlooked link, starting in the Harlem jazz club the Royal Roost (later Birdland), mentored by jazz legends such as Lester Young and Charlie Parker, then moving to the Village Vanguard playing folk and world music and becoming a civil rights force. He also gave Dylan his first commercial recording on “Midnight Special” when Belafonte was already a huge star and Dylan was an unknown.

The Beats, including Ginsberg, Kerouac, William Burroughs, Ken Kesey and Neal Cassady, came together with the Folkies in the 50s and 60s primarily in San Francisco and NYC’s Greenwich Village. Both groups were part of a literary community that met, talked and performed at the famous clubs in the Village.

Woody Guthrie and Pete Seeger were the linchpins in the NYC folk boom, championing music of the common people as a counterpoint to the Tin Pan Alley pop music of the day. They were also openly political and counter cultural before that was in vogue.

Woody was the Okie who followed the dust bowl refugees to California and later came to New York. Seeger was the native New Yorker and college drop out who worked with Alan Lomax at the Archive of American Folk Music at the Library of Congress to help catalog recordings of American indigenous music before returning to the city.

In the 1940s they founded the Almanac Singers – a loose and changing group including Woody, Pete, Lee Hays, Bess Lomax, Josh White, Sis Cunningham, Cisco Houston and others. The Almanac House was the hang out for the artists and where they started the first hootenannies; that is, rent parties.

As the Almanacs faded Pete, Lee Hayes, Ronnie Gilbert and Fred Hellerman formed the Weavers (in contrast to the Almanacs, the Weavers had a fixed line up and actually rehearsed) and had an improbable hit with “Goodnight Irene” written by Leadbelly, a Black sharecropper. 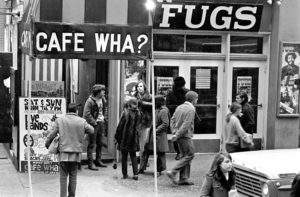 In the 1950s and 60s New York City in general, and Greenwich Village in particular, were the creative epicenter of the arts. The Village combined cheap rents, pass the basket and open mic clubs and key figures who were catalysts for genre bending arts: not just poetry and folk music but visual arts, literature, and a wide spectrum of music from folk to jazz to blues to tin pan alley.

Within five Village blocks were the Purple Onion, the Night Owl Cafe, Cafe Wha?, the Gaslight, the Kettle of Fish, Cafe Figaro, the Bitter End, the Other End and, the epicenter, Gerde’s Folk City. The Cafe Wha? was where Bob Dylan made his New York debut, and Allen Ginsberg and Jack Kerouac performed.

This was the scene! Everybody was there.

Many of the people in both groups were activists. Ginsberg was a social and political activist; he was in the South in 1963 with Joan Baez, Phil Ochs and many others in support of the civil rights struggle. He was at the 1968 Democratic Convention in Chicago with Abbie Hoffman and Phil Ochs. The groups found common ground opposing the war in Vietnam, supporting civil rights, gay rights and liberalization of drug laws.

There was significant cross fertilization of ideas and artistic approaches, as well as direct collaboration. Woody Guthrie published his autobiography Bound for Glory in 1943, which had a significant influence on Jack Kerouac’s On the Road, released in 1957. Ginsberg and Dylan met in the Village in 1963 and became good friends and regular collaborators. Ginsberg influenced many early Dylan songs, notably “Subterranean Homesick Blues” and “A Hard Rain’s A-Gonna Fall.” Ginsberg accompanied Dylan’s Rolling Thunder Revue tour (1975-76) and occasionally read his poems on stage.

But while the relationship with Dylan was special and long lasting it was only the tip of the iceberg of Ginsberg’s and the Beats influence on the folk and folk rock performers.

A wide range of songwriters credit the Beats as influences. Phil Ochs, a Village stalwart political activist and topical songwriter, wrote “William Butler Yeats Visits Lincoln Park And Escapes Unscathed” after being at the 1968 Democratic Convention with Ginsberg; Jim Morrison and the Doors cited Kerouac as an inspiration for songs like “Light My Fire” and “Riders on the Storm”; Ginsberg was a Buddhist and drug proponent and close friend of the Beatles, who helped propel them to India and songs like “Lucy in the Sky with Diamonds.” Paul McCartney played on a Ginsberg recording of “The Ballad of the Skeletons” in 1996. Eric Anderson met Lawrence Ferlinghetti at his City Lights Book Shop in San Francisco where he hung out with many of the Beats before heading to the Village. He later made the album “Beat Avenue” with the title track a 26 minute musical poem about the JFK assassination that channels and references the Beats.

In San Francisco the Beats Ken Kesey, Neal Cassady and others held public gatherings known as “Acid Tests” where a band called the Warlocks played. The Warlocks would change their name to the Grateful Dead after they discovered the name ‘Warlocks’ was taken by another band. The Dead might have beeb the first Beat band.

And the beat goes on (pun intended). You can hear the influence of the Beats in rap and other music today, and the legacy of the early Folkies such as Woody and Seeger is as strong as ever. The great cultural synthesis continues.

The Beats and the Folkies