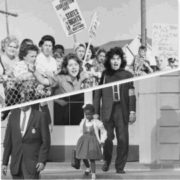 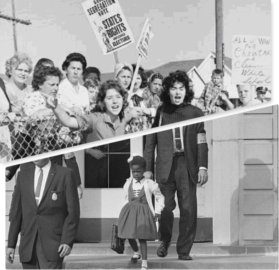 The intersection of race and education has been a flashpoint since the beginning of the nation. Enslaved Africans forcibly brought to the United States were both exploited and feared. The successful slave rebellion in Haiti (1791-1804) raised great fear among American slave owners that a similar rebellion could take place in the United States. Paul Robeson captured the spirit of the slaves desire to be free:

One of the ways to thwart the possibility of a slave rebellion was to restrict the availability of information and to make communication difficult or impossible. A key element of that was to keep enslaved people from learning to read and write thus reducing the possibility of communication among disparate groups. In many states it became a crime to teach Black people, even freed Blacks in many cases, to read and write. Most slave states passed anti-literacy laws. For example, the Alabama Slave Code of 1833 included the following law “Any person who shall attempt to teach any free person of color, or slave, to spell, read or write, shall upon conviction thereof by indictment, be fined in a sum of not less than two hundred fifty dollars, nor more than five hundred dollars.”

After the Civil War and the supposed emancipation of slaves, white supremacists needed to take different steps to stop the education of Blacks. Black codes, Jim Crow laws and the re-institution of slavery via peonage were largely successful in limiting the educational opportunities for Black students.

The 1954 Supreme Court decision in Brown versus Board of Education raised new problems for the efforts to limit black education. It resulted in a number of states repealing their compulsory education requirements. For example, on September 29, 1958 six of Norfolk, Virginia’s formerly all-white schools were closed to avoid integration. Perhaps most egregiously, Prince Edward County Virginia closed all its public schools between 1959 and 1964 rather than allow Black and White children to sit together in the same classroom leaving Black students with no schools to attend. Of course local officials created private white only schools funded by state and local taxes via grant programs – an early form of school vouchers.

Our Native Daughters in their song “Better Git Yer Learnin”” addressed some of these issues:

As whites have increasingly realized they can not prevent the education of Blacks, they have turned to trying to control the education of white children to inculcate their “conservative” views. I put conservative in quotes to denote that the views being promoted are actually quite radical, racist and authoritarian. A famous early example of this was the effort to stop the teaching of evolution and basic science in public schools in the early 20th century. Unsurprisingly, the teaching of evolution was at least as much about race as about biology. As one commentator at the time said “if the entire human race is supposed to have started from a common origin then white supremacist would have to admit that there is no fundamental difference between themselves and the race they pretend to despise”.

It is not hard to see the parallels between the attempts to suppress the teaching of evolution and its implications for race with current attempts to control the teaching of issues around race, slavery, sexual orientation/identity, indigenous people genocide and related issues. In state after state and school district after school district teachers are being restricted on how they can teach certain topics, curriculums are being limited to conservative points of view, books are being banned and like-minded parents are being organized to monitor and harass educators, school board members and others who do not fall in line.

Banning the teaching of controversial topics or more pointedly making sure that what is taught reflects the point of view of only one group, in this case white supremacists, is a dangerous approach that undermines democracy itself. The Supreme Court in a decision in 1943 in West Virginia State Board of Education vs. Barnette struck down a state statute the required school children to salute the flag and recite the Pledge of Allegiance saying “those who begin coercive elimination of dissent soon find themselves exterminating dissenters. Compulsory unification of opinion achieves only the unanimity of the graveyard.” These words resonance loudly today.

On May 10, 2021, in a move reminiscent of the arrest of John Scopes for teaching evolution, Matt Hawn, a high school social studies teacher in Tennessee, was fired. Hawn was dismissed after school officials said he used materials with offensive language and failed to provide a conservative viewpoint during discussions of white privilege in his contemporary issues class, which has since been eliminated. But it is not just Tennessee, since January 2021, 42 states have introduced bills or taken other steps that would restrict teaching “critical race theory” or limit how teachers can discuss racism and sexism, according to Education Week.

Banning books is another tool to control what children learn and assuring that a white conservative viewpoint is paramount. The not for profit PEN America tallied efforts between 1 July 2021 and 31 March 2022, found that 1,586 bans were implemented in 86 school districts across 26 states. Authors and/or protagonists of color or LGBTQ+ were most likely to be targets of the bans. Perhaps missing the irony, a parents’ group in one Tennessee district challenged the use of an autobiography of Ruby Bridges, who in 1960 was one of the first Black children to integrate an elementary school after Brown v. Board of Education. In one Texas case, teachers were advised to present “opposing” views of the Holocaust.

It is tempting to dismiss such absurdities as the ravings of maniacs but as we have seen from Texas to Florida to the halls of Congress and even in the White House such people are increasingly our representatives and our face to the world and notably controlling our world. We would do well to remember Voltaire’s words “Those who can make you believe absurdities can make you commit atrocities.” The fight over education, information and truth is a fight over the future for our children and our country. It is about who we are as Reggie Harris warned us.

A Brief History of the Attack on Education in America