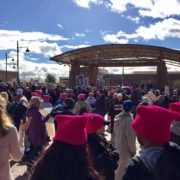 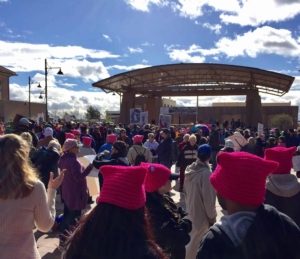 On January 21, 2017, I was walking in a line of people that stretched about a mile  around the central plaza in Las Cruces, New Mexico. This Women’s March was one of a number of such events around the country in support of women’s rights and equality. As we marched, chanted and chatted two thoughts came to mind. First, didn’t we do this 50 years ago and weren’t these issues supposedly settled? And second, there’s something missing, and what was missing was the music. When we did this kind of thing in the sixties there was always music that inspired, supported and spoke to the issues at hand. During what the historian  Christopher B. Strain called the Long Sixties, encompassing the years from 1955 to 1973, protest music provided a soundtrack for much of the political and social upheaval taking place.

American protest music is as old as the country. “Free America” was a Revolutionary War song written by Minuteman Joseph Warren to protest British tyranny.

But it was slavery and the abolition movement that really brought protest music to the fore. The first widely known protest songs in the US came from slaves, often derived from hymns with themes of freedom or escape. Negro spirituals are thinly veiled expressions of protest against slavery and oppression. Songs like “Oh, Freedom,” “Go Down Moses” and “No More Auction Block” were both a protest against the inhumanity of slavery and an expression of the desire for freedom.

Many of the protest songs from the first half of the 20th century were associated with the struggle for workers’ rights – fair wages and safe working conditions – and the fight for unions. The Industrial Workers of the World (IWW aka Wobblies), founded in Chicago in June, 1905, used music as a powerful form of protest and as an organizing tool.  The IWW activist Joe Hill famously wrote songs like “The Preacher and the Slave,” “The Tramp,” “There Is Power in a Union,” “Rebel Girl,” and “Casey Jones—Union Scab.”

The protest music of the Sixties represented something of a departure from what had come before. Protest music and folk music more generally had been centered on working people and was often created and performed by those working people. The primary mission had been to support workers, especially through unionization. Those were the underpinnings of the music of Woody Guthrie, Pete Seeger and so many others coming out of the depression and the Dust Bowl.

In the 1960s the focus changed. While often giving lip service to working people, the focus of much of the long Sixties protest music was on stopping the war in Vietnam and its associated draft, supporting the Civil Rights Movement and less often, the women’s rights movement. The music was often created and presented by people observing the scene rather than living the struggle, and many were professional musicians.

Even those that were very socially and politically engaged, such as Phil Ochs, Joan Baez, Judy Collins and Harry Belafonte, basically showed up at rallies and events, sang their songs, and went home. They were not the black students being beaten by cops in Alabama and they were not the draft resisters burning their draft cards or moving to Canada. No, they went back to New York City or San Francisco or Chicago and sang their songs in clubs to an audience that was no longer workers – at least not in the sense of being miners, lumberjacks or factory workers. The audience was mostly college students, often beneficiaries of the GI bill and the new affluence of the American middle class. Like the folk singers, after singing along with Peter Paul and Mary or Tom Paxton they went back to their college classes Monday morning to get an education so they could work in corporate America or Wall Street, too often exploiting the very people that protest music once used to support.

However, there is a commonality between the songs of the Sixties and what came before.   Most protest songs were crafted for a purpose: to draw people together around a central mission. This meant rallying striking workers in the Twenties and building political pressure to change national policy in the Sixties.

I have said on more than one occasion that Trump may have been bad for the country but he was a boon for protest music. We have witnessed an outpouring of songs in support of Black lives, immigrants, women, improved wages and the environment.  Sadly we are going to need many more.