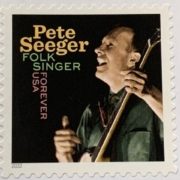 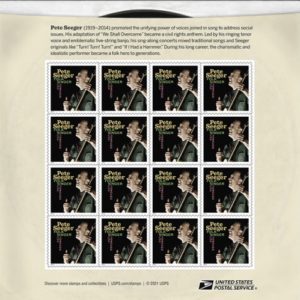 Traditional folk music, by its very nature, is often considered timeless; but it is rarely mainstream.  This was not always the case, however. There was a time – in the late ‘40s, early ‘50s, and again in the ‘60s and early ‘70s – when more than a few folksingers became household names. From Woody Guthrie, Pete Seeger, and The Weavers to later legends like Bob Dylan and Peter, Paul and Mary, these early folk icons sang of economic inequity and racial injustice. Their songs were unabashedly political in nature, yet it was this unlikely subgenre that was largely responsible for first bringing folk music to the American consciousness.

The inspiration for this music initially stemmed from the labor union movement, dating back to the ‘30s and ‘40s.  Songs like “Which Side are You On?,” “Banks of Marble,” and “Horse with a Union Label” were the battle cry of many working class Americans. And their message was further empowered by the growth of electronic technology after the Second World War, when records and the radio carried these songs into almost every home across the country.

I was twelve at the time when my guitar teacher took me to a concert at Carnegie Hall featuring Pete Seeger. Already a legend, he was charismatic and unforgettable – inspiring me and a whole generation of future folksingers.

Of course, during the dark days of McCarthyism and the Communist witch hunt in the ‘50s, many of these pioneering folk artists were blacklisted from the music business. But despite the best efforts of the House Un-American Activities Committee, the message of these protest singers lived on, and rose again in the tumultuous ‘60s with the songs of Bob Dylan, Phil Ochs, Joan Baez and countless others.

Today, the Post Office sells Pete Seeger stamps (as Joseph McCarthy turns in his grave!) and my granddaughter listens to Woody Guthrie’s “This Land is Your Land” at nursery school!! Still, unfortunately, folk music is no longer mainstream. After branching out into some popular singer-songwriter styles in the ‘60s and ‘70s, the genre returned, once again, to the sidelines.

But political folk is far from dead! Over the past fifty years, new folksingers and songwriters have continued to add their voices to the chorus of songs calling for an end to war, injustice, greed, racism, pollution, etc. From Utah Phillips to Rising Appalachia and Emma’s Revolution, the list is enormous and ongoing.

From the start, some protest singers built on the earlier work of others. Pete Seeger covered many of Woody Guthrie’s songs, and Peter, Paul and Mary covered a number of Seeger’s songs; Joan Baez lent her magnificent voice to Bob Dylan’s classics; and recently, Rhiannon Giddens created a stunning rendition of Woody Guthrie’s “All You Fascists Bound to Lose.”

But the recent onslaught of problems and struggles – in this country and around the world – has called for new themes as well. And as more and more social, political, and environmental issues have become all too apparent, more modern-day minstrels have expanded their subjects to include global warming, gun control, women’s rights, gay rights, and outrageous political corruption.

Once again, it has been the growth of technology – in this case, social media – that has carried these new songs to a wider audience. Just 2 ½ years ago, for example, Tom Prasado Rao recorded “Twenty Dollar Bill” (about George Floyd) in his home studio and posted the lyrics and the chord chart to Facebook. Within a matter of days, the song had been covered by 100 singers from all over the world.

As FolkWorks has demonstrated for years now, thanks to the internet, we are able to tune in to some wonderful new political folk albums by giant talents, such as Ernest Troost (Saving the Republic) and Pat Wictor (Flare). And we all have access to protest music around the globe.

But there’s more! Just as themes of protest music have expanded in this century, so have the styles – in particular, the increasing use of humor. I personally find that laughter is extremely cathartic when it comes to expressing outrage. And thankfully, we have a wealth of wickedly funny political folksingers these days!

Heading the list in my book is the prolific, brilliant Roy Zimmerman. His take on the hypocrisy and idiotic posturing of those who would be our dictators is second to none. And then, there is the inimitable (and also prolific) Christine Lavin, with her litany of unrestrained Trump-stabbing songs; and the multi-talented Cynthia Carle, whose gift for killer lyrics with a dramatic flair makes songs like “Fear of Clowns” (from the days of “W”) absolutely unforgettable. Even the ageless Joan Baez has added her own dry wit to the satirical library with her 2017  YouTube video, “Nasty Man.”

Of course, I have just scratched the surface of political folk, and I apologize to all the thousands of political songwriters whom I have not named. In the end, I believe, this music will always be “the voice of the people” … conveying a truth that is often so emotionally charged that it is best said in song.

The River of Songs Keeps Flowing