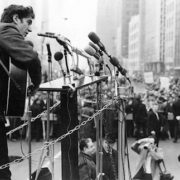 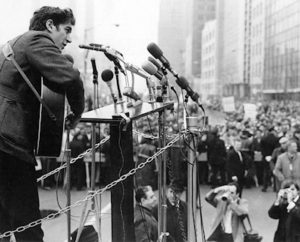 I’m writing this on my birthday, which is just ten days before Phil Ochs’ birthday December 19, 2020 when–having been born in 1940–he would have turned 80 years old. The reason I mention it is that it’s the one day of the year my favorite author and poet Robert Graves took off from writing. I did not plan on writing today either, in recognition of Graves’ day off—but I’m no Robert Graves, and tomorrow is Human Rights Day—the 10th—and I may need to finish it then—to be able to get it done by FolkWorks’ deadline which is also the 10th. I don’t have time to waste.

The long and the short of it is that Phil Ochs’ 80th birthday is the reason I’m writing, because I knew that I would have to honor Phil on the same anniversary as John Lennon’s—they both turned 80 this year—2020. Happy Birthday, Phil!

Phil Ochs took his own life 45 years ago in 1976, during the Bicentennial, at the age of 35. Composer of the patriotic anthem The Power and the Glory—second only to This Land Is Your Land in its melding of the American landscape with a profound identification with its people—Ochs raised the modern protest song to a high art. With such classics as I Ain’t Marching Anymore, Draft Dodger Rag and There But for Fortune, he became the voice of the antiwar movement; and with such classics as Here’s To the State of Mississippi, What’s That I Hear and Too Many Martyrs with Bob Gibson (for Medgar Evers) he became a voice (along with Pete Seeger, Bob Dylan, Joan Baez and Len Chandler) of the civil rights movement.

He was staying at his sister Sonny Ochs’ home in Far Rockaway, New York, when he wrote the Power and the Glory. She came home and heard him playing the same passage over and over—a descending chord progression in C–on his Gibson J-45. “What are you doing?” she asked him. “I’ve just written my greatest song,” her brother replied. “What’s the title?” she wanted to know. “I don’t know,” he answered; “I haven’t written the words yet.” For an artist who was known for his lyrics, she found that unusual, especially since he already described it as his “greatest song.” She learned in that exchange just how important the music was to him—not at all what she was used to hearing from fellow protest songwriters. He was a poet for sure—but Phil Ochs was also a composer of the first order. 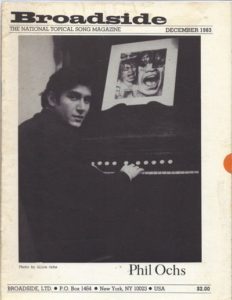 He began as one of “Woody’s Children” at Gerdes Folk City in Greenwich Village, penning songs as fast as Woody Guthrie had a generation before; when Pete Seeger took him and Bob Dylan up to the offices of Sis Cunningham’s Broadside Magazine at the beginning of 1963 to hear songs they had written in just the past two weeks—and which Broadside would be the first to publish—Seeger came away astonished at both their creativity and productivity; he concluded that “Here were two of the greatest songwriters in the world, only no one knows it yet.” By the end of 1963 they were the two leading lights of the modern folk revival.

Two years later, when Dylan went electric, Phil Ochs expanded his own musical vocabulary by going classical, surrounding new songs like Pleasures of the Harbor and Outside of a Small Circle of Friends (a trenchant satire about the murder of Kitty Genovese in New York City in broad daylight) with piano accompaniment and orchestral settings. But he also continued his musical and political activism, becoming a founding member of the Yippies (with Abbie Hoffman, Jerry Rubin and Tom Hayden) at the Chicago Democratic Convention in 1968, and testifying on their behalf at the Chicago 8 conspiracy trial. Despite the famed theatrics of the trial, all of the defendants were eventually acquitted.

But Phil Ochs did not need a conspiracy to organize effective protests against the war in Vietnam; he was a one-man movement who brought together thousands of people in the famed The War is Over demonstration in 1970, inspired by his song of the same title. Unlike his hero James Dean, Phil was a rebel with a cause, and he was not afraid to rebel against even his own fans; at his landmark late concert recording Gunfight at Carnegie Hall, he wore Elvis’s gold lame costume and mixed in his favorite Elvis and Buddy Holly songs along with his classic protest material, much to the chagrin of his audience, who had come to see a folk singer, not a rock and roll star. Phil documented the traumatic event in his song Chords of Fame, with the telltale line “God help the troubadour who tries to be a star.”

Shortly thereafter, at the threshold of the depression that would eventually take his life, he wrote No More Songs, a brutally honest look at an artist who was coming to the end of the road, after a decade-defining outpouring of songs that—were all the books and speeches of the time to be burned in a Fahrenheit 451 nightmare—would enable historians to reconstruct both its highs of idealism, hope and quest for social justice and its lows of failed dreams and cynical politicians that led to Watergate and Cambodia. Phil wrote about them all.

The most recent singer to celebrate Phil Ochs’ life and legacy is Neil Young—who is one of the most important artists of our generation. Gone he may be, but Phil Ochs is not forgotten. “You won’t find me singing on this song when I’m gone, so I guess I’ll have to do it while I’m here.” (“When I’m Gone,”) Phil Ochs definitely did it while he was here. His songs remain timeless.