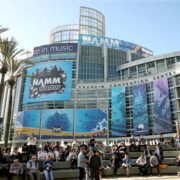 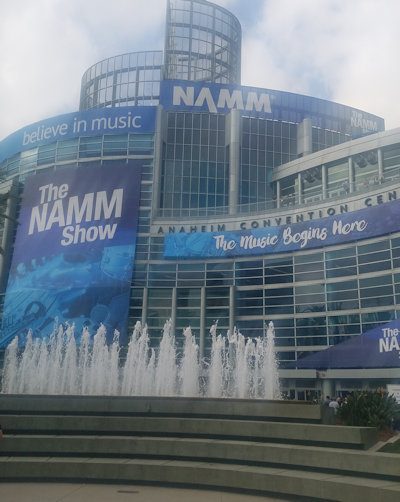 I was determined to approach my visit to the annual event methodically, so I decided to walk the perimeter of the huge lower chamber that housed the acoustic division of the exhibit and examine all the booths that lined the walls. Then, row by row, I would check each section to see what attracted my interest and jot it down. According to my plan, at the end of each row, I turn right, go to the next row, and walk the opposite direction to the end of that row. Then turn left and follow that on the next row. On and on like that until I had seen every booth on that level and taken careful note of the location of the ones I planned to examine more closely later. That way, I would get to see everything and choose where to focus based on that highly mathematical and foolproof surveillance methodology. When I passed the Black Mountain Picks booth with their spring-loaded thumb-picks for the third time, I realized that somewhere, somehow, I had made a wrong turn.

I’m a guitar player, a folksinger in fact, and acoustic guitar playing rescued me from having to finish school in a subject I deplored and allowed me to have an enjoyable life and make a few bucks along the way. So it’s easy to understand why, at a trade show the magnitude of NAMM, all the trinkets, electronic doodads, trombones, DAWs (yes, DAWs are real – look them up), etc. held only mild interest for me, and I headed straight for the guitars, banjos, fiddles and ukuleles. OK, a word about ukuleles. I have a theory. I think that old fingerpicks and used strings hide in the back of music stores where they become the larvae or pupa stage of ukuleles. Then in the darkness of moist nights, they emerge and hang themselves on hooks where guitars used to hang. They’re everywhere and no one knows where they really come from. Keep this under your hat.

I was afforded a press pass courtesy of Steve and Leda Shapiro of this publication and I suppose it is only appropriate that I document those moments at NAMM that did indeed make the trip worthwhile.

As mentioned, I visited the guitar and banjo makers that have always impressed me and continue to do so. “Guitar sales are down, inventories are backing up, sad to say” was a comment from one major manufacturer with whom I spoke. The reasons were many but the finger of blame seems to point to the youth of the country whose interests are leading them away from the familiar pleasures of the smell of wood and the twang of steel and nylon and into the simpler and more accessible world of electronics and simpler to play stringed instruments. Dare I mention the “U” word?

Although some of the guitars I visited were spectacular in construction and materials, I found difficulty in actually being able to play, feel, and hear the instruments due to the persistent din of the location which made it for the most part a visual and tactile experience. 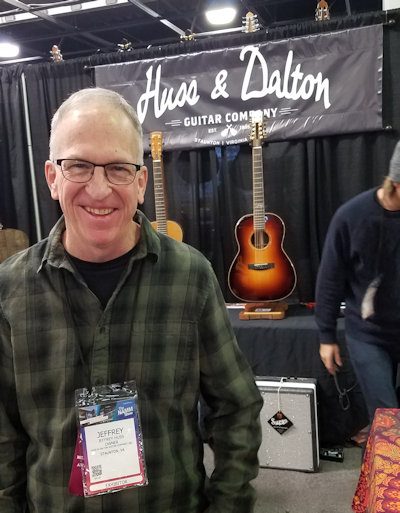 I visited with Jeffrey Huss, owner of Huss and Dalton Guitars. Anyone who has listened to the richness of John McCutcheon’s guitar playing can attest to the singular resonance of the Huss and Dalton line. This marks the second year in a row that I was dismayed that Huss and Dalton has no distributors in the greater Los Angeles area. Any dealers out there reading this? Jeffrey Huss would like to hear from you.

I visited Larivee, Collings, Santa Cruz, Martin, Lowden, Kenny Hill, among others. The list of adventurous guitar makers grows every year and I found the personnel amicable and forthcoming and passionately committed to build playable and beautiful instruments. The musical instrument is one of the great markers of the human quest for beauty. I truly believe that. If you doubt it, get yourself over to a show like NAMM and see it for yourself. Great guitars are still being built. Taylor continues to innovate with size and configuration. I use a Taylor nylon (amplified) for concert appearances and it fills most rooms with a warm orchestral feel. Anything radically new to report? Not really. True quality has no respect for needless reinvention, yet the possibility always exists so the effort is being made. Why not?

There was a guitar on display that had already been sold for more than twenty-five thousand dollars. I’m not sure where that belongs in the great scheme of things but then again…

On the subject of reaching beyond the traditional, several booths featured guitar tone woods known before only to people like David Livingston, Percy Fawcett and perhaps Hans Solo. The woods have names seductive enough to order in a restaurant and sound authentic. Cocobolo? C’mon… “Waiter, could you bring me the caramel spruce? Please, not too heavy on the cream.”

There were some who have taken on the noble task of reinventing guitar design. David and Chris Taylor of Emerald Bay Guitars in Lake Tahoe feature fan fret design, an innovation designed to even the tone and tension of the strings.

The harp guitar, one of the most unique guitar configurations capable of marvelous music, was featured in one booth that caught my eye. The construction and detail were breathtaking. The resulting sound is arrestingly beautiful. Jim Earp guitarist demonstrated elegantly. 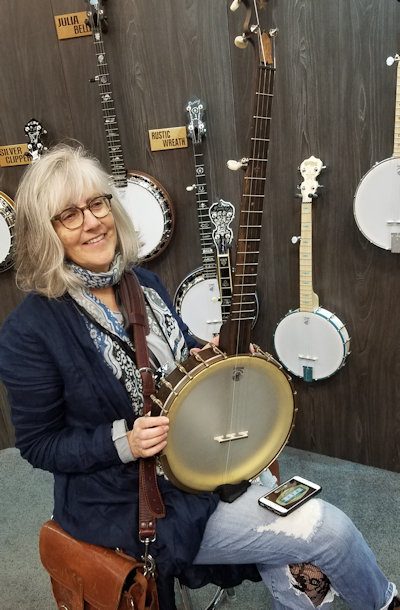 Banjos? Deering and Gold Tone were there. I ran into fellow FolkWorks writer Annette Siegel seated at the Deering exhibit, trying out her clawhammer technique.

Perhaps the highlight of my visit was the discovery of two of my favorite artists, Jens Kruger of the Kruger Brothers, seated at the Deering Banjo booth alongside Mark Johnson. The playing was inspired with the blending of three finger picking (Jens) and clawhammer, which Johnson labels ‘Clawgrass’. I wish that a recording of the jam was available but noise on the floor of the convention center precluded any meaningful recording. Try YouTube.

Confession about technology: I did spend some time at the PG Music booth. PG Music offers a home recording program designed for the solo artist who needs instrumental support in home recordings. Your reporter is an owner of said program and some of my finest recordings have been made with their combination program Band In A Box/Real Band. Like most home based recording programs, there’s a bit of a learning-curve.

Otherwise, the innovations and gadgets were a’plenty. From the aforementioned flat-pick with a spring attached finger clamp, to a guitar with a built-in recording device to play and record loops without having to stomp on a foot pedal or throw a switch. Wireless this and that, microphones in colors not dreamed of by Crayola, gleaming capos and tuners, amplifiers, devices to wind miles of cable, instrument cases that can withstand Elon Musk’s maximum acceleration and return to earth with the instrument still in tune despite lunar or Martian baggage handlers.

I decided to leave after having reached information-overload and I headed in the direction of the exit.