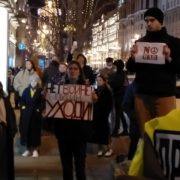 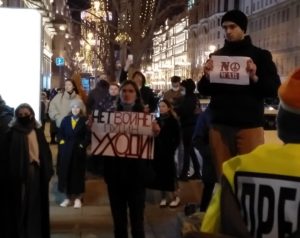 Recently I ran a song writing contest asking artists to submit songs on the theme “Louder Than the Guns” which is a line from a Phil Ochs song. In response I received some fantastic songs from a diverse set of amazing singer songwriters. This was before the war in Ukraine began. Now suddenly a number of those songs have taken on new meaning, or perhaps I simply hear them in a different way such as Linda Sussman’s anthem We Will Rise all of which got me to think about the value of anti-war songs.

Once again, songs of peace and songs against war have failed to stop another conflict. Perhaps we can sing louder than the guns, but songs seem no match for tanks and rockets. Love does not seem to be overcoming hate. While we in the folk music world are in the hearts and minds business, working to convince anyone who will listen that war is not the answer, the war mongers are in the murder and mayhem business, or more precisely the power and greed business. We seem to have brought a knife to a gun fight.

For another war Phil declared “I Ain’t Marching Anymore” and Pete observed that “We Are Waist Deep in the Big Muddy,” but that war went on for several more years, only postponing America’s defeat. Did the songs make a difference? They didn’t stop the bombs, the napalm or the unending killing. They were cathartic, if not effective.

The war in Ukraine is different in that the US is not fighting directly, although we are deeply involved, both as a country and as individuals trying to find ways to help the Ukrainian people. It is easy to vilify Putin ,and definitely deserved, but convenient to ignore that what Russia is doing in Ukraine looks disconcertingly like the unprovoked invasion of Iraq. Where were the sanctions for that? It is easy to ignore our history, our transgressions, so easy to be self-righteously calling out the villain but never looking in the mirror. It is a dangerous thing. And dangerous things that are ignored tend to recur.

As I try to decide what songs to play on my weekly radio show it feels complicated. Should I play Tom Paxton’s “Peace Will Come,” Seeger’s anthem “Where Have All The Flowers Gone” and Eliza Gilkyson’s “Peace Call”. Should I in effect heed Martin’s advice and look to our better angels?

Would it be better to play more strident anti-war songs like Edwin Star’s “War,” or Dylan’s “Masters of War” or maybe even “I’m Fixing To Die Rag” from Country Joe McDonald. Would that be more effective or at least more cathartic? It can be easy to become cynical or even depressed. It’s not like Putin is listening or would be moved, even if he was. We are just preaching to the choir, but as Dave Gunning suggests on “Sing It Louder,” “I am preaching to the choir to sing it louder;” yes, even louder than the guns.

Louder Than the Guns

Music for the New War