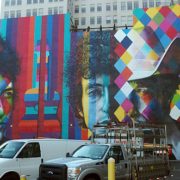 Is Dylan Mural Worth a Thousand Words? 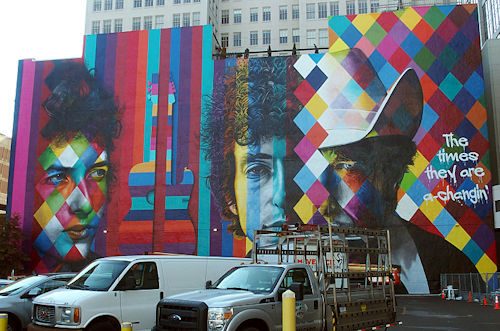 On the side of a five-story office building in downtown Minneapolis is a new mural of Bob Dylan called The Times, They Are A-Changing—painted by Brazilian street artist and public muralist Eduardo Kabro and a team of five assistants—two of them from Minneapolis—and completed September 8, 2015. It’s an enormous homage to American’s greatest songwriter—as described by Kabro—“one of the most important figures in 20th Century music.”

It is not the first time Dylan’s work has been associated with visual art; from the man himself, in When I Paint My Masterpiece:

The streets of Rome are filled with rubble,

You can almost think that you’re seeing double…

Well, Eduardo Kabro picked up on this resonant line and went Dylan one better—here you can almost think that you’re seeing triple, as indeed you are; the mural is a triptych that represents Dylan in three distinct phases, beginning from left to right, the artist manqué from 1963s Freewheelin’ breakthrough album, the Tarantula cover and Don’t Look Back “Dylan Goes Electric” folk rock pioneer of 1965, and the more recent post- Rolling Thunder Review cowboy hat-adorned elder-statesman and future Mt. Rushmore of American Music nominee of Time Out of Mind, Love and Theft and Tempest—all framed by a dazzling display of Picasso-influenced pyrochromatic cubes and one symbolic acoustic-electric guitar in the center.

It’s an awesome, massive, inspired evocation of five decades of Dylan’s ever-growing vision of an American landscape that continues to burn brightly in his incandescent imagination—as he does in our collective imagination.

Dylan continued to ruminate in that long ago ode to his overarching artistic ambition:

On a long dark night on the Spanish Stair

Gotta hurry on back to my hotel room

Got me a date with Botticelli’s niece

She promised she’d be right there with me

When I paint my masterpiece.

We may disagree on what in fact is Dylan’s masterpiece—from the early protest classic Blowing In the Wind, to Rolling Stone’s pick of the greatest song of the rock era, Like a Rolling Stone, to Shakespearian vignettes like Desolation Row or Visions of Johanna—but there seems little doubt that this epic mural will go down as Eduardo Kabro’s masterpiece. It is unlikely that at five stories high and 160 feet wide even the Pope will inspire such a majestic tribute. I don’t know how Bob could even walk down the streets he once called home without feeling both a bit embarrassed and shedding a tear at the hagiography of this most amazing shrine to what Joan Baez once called “the original vagabond.”

Minneapolis was the city where he spent six months at the University of Minnesota, where he remembered “staying up all night plowing through the philosophy of Kant instead of reading “Living With the Birds” for a science course,” before dropping out to become a rambling acolyte of Woody Guthrie heading for Greenwich Village. While there he lived in the campus student section know affectionately as Dinkeytown, where he fell in love with folk music and befriended the editors of The Little Sandy Review—who mistakenly loaned him some invaluable Folkways LPs from their record collection—including the collected works of The New Lost City Ramblers—never to be seen again. At some point Dylan put them all in his backpack and grabbed a fast freight for NYC, winding up in the Holland Tunnel, which he later memorialized in Talking New York—his debut album’s vivid description of “the coldest winter in seventeen years,” February, 1961.

But Minneapolis remained vivid in his memory and imagination—as well as “the North Country” he came from—Hibbing, Minnesota; which he captured in both North Country Blues, about the disappearing mineworkers along the iron range of Northern Minnesota where his family lived, and Girl From the North Country, his classic love song for the girl he left behind—which he would eventually record with Johnny Cash. It is essential to an understanding of his growth as an artist that Dylan came from Middle America, not the big cities but what Greil Marcus described as “The Old, Weird America,” the last living link to our small town and rural prairie past. As Dylan would write later they “didn’t have a TV;” he listened to the radio to discover the wider world—which was the beginning of his musical education. He credits that to his continuing emphasis on aural and oral imagery—not just visual: “The harmonicas play the skeleton keys in the rain,” and “the ghost of ‘lectricity howls in the bones of her face” from Johanna.

To see the enormous hoists from which the artists had to work on the upper floors of Kabro’s mural is to be put in mind of Michelangelo’s arduous perch beneath the Sistine Chapel’s extensive ceiling; it was an extraordinary physical challenge beyond any feats of imaginative daring—more like building a bridge than painting a mural—as indeed it was—in poet Hart Crane’s sense of the Brooklyn Bridge as a metaphor beyond its physical means of conveyance from Brooklyn to Manhattan. This miraculous bridge takes you from Dylan’s early folk period to folk rock to his current amalgam of blues and standards from Frank Sinatra’s 1950s canon all the way back to the “ancient footprints” of his new song Early Roman Kings on his most recent album. Dylan’s music holds the whole world in his hands, and Kabro’s mural evokes his sublime vision of America’s past that embraces its links to ancient civilization as well.

That it took a Brazilian artist to fulfill the potential of Dylan’s artistic vision for a mural is in itself a testimony to the worldwide scope of his music. Bravo, Eduardo Kabro!

To fully appreciate the process of creating this mural I encourage you to follow this link to photojournalist Jill Emmer’s account of the unfolding stages of work it took to complete, including scenes of Kabro and his crew on the lifts; Jill Emmer writes, “On both of my visits, there were crowds gathered around to watch the progress. Minneapolis social media feeds are abuzz with photos of it. This mural— commissioned by the building’s owner (a subsidiary of Goldman Sachs) with the hope of attracting creative companies to work in the space— isn’t even complete yet and it’s bringing the community together and building excitement about a neglected corner of downtown Minneapolis. And that, in my mind, is what public art is all about.”

Dylan is on the mind of many writers and artists this year—the 50th anniversary of when he plugged in and went electric at the 1965 Newport Folk Festival. Elijah Wald has just published a book about that magic moment called Dylan Goes Electric.

Los Angeles folk singer Ross Altman has a PhD in Modern Literature; for further information about these events Ross may be reached at greygoosemusic@aol.com

IS DYLAN MURAL WORTH A THOUSAND WORDS?