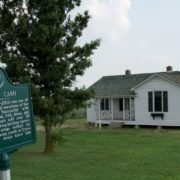 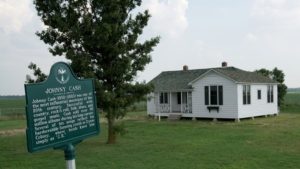 It’s 200 miles of mostly 2 lane blacktop from Rohwer due north to Dyess along the eastern edge of Arkansas. It’s industrial farm country. Almost all the trees have been removed except the occasional one by a farmhouse. There are no hedgerows, virtually no fences and as far as you can see in every direction are croplands that is as flat as the proverbial platter of piss. It’s boring, yet captivating. While you can’t exactly see the rural south of yesterday you can feel it like some ghost that lingers around the edges of the fields. It is not hard to imagine endless acres of cotton with slaves bent over the plants.

I first visited Rohwer to the south. It, too, is now a vast empty crop field with only a single smokestack punctuating the sky. It marks the site of the power plant for the Rohwer internment camp where nearly 12,000 Japanese Americans were incarcerated during WWII after being forcibly removed from their homes, businesses and communities, with only the possessions they could carry. On Sept 18, 1942, when the first prisoners arrived, they were greeted by crude barracks with cots for beds and swampy fields they were expected to turn into productive farmland. Gone now are the buildings, the barbed wire fence, the guard towers and the sound of Japanese voices waiting in the line at the mess hall. Instead, you will find two monuments constructed by the residents of this concentration camp, one for those who died while incarcerated and another for those from the camp who fought and died for the US in WWII. Irony clings to the granite.

The Japanese internment has inspired some haunting music, including Tom Russell’s iconic song “Manzanar.” However, I think the brilliant Canadian singer songwriter James Keelaghan captured the essence of this episode in our history better than anyone with his song “Kiri’s Piano.”

Two hundred miles north along still unpaved Road #3 I stop in front of the house at farm #266. As I look around it appears to be the only house remaining in what is known as the Dyess Colony. It looks much as it probably did in March of 1935 when a truck sent by the state relief organization deposited a husband, wife and their five children in their new home. If you have heard of the Dyess Colony at all it is likely because of one of those children was three-year-old JR Cash. He wouldn’t become Johnny Cash until 1950 when he went to join the Air Force and was told he must have a name because initials were not acceptable.

The Dyess Colony was one of many efforts under the New Deal to mitigate the effects of the Great Depression. Like many of the New Deal programs it was an experiment, but unlike some other of the attempts this one was quite successful. Dyess or Colonization Project No. 1 as it was called, was just one of a number of colonies that were developed under this program. At the time it was not termed a socialist program but in fact that’s what it was. The federal government bought 16,000 acres of land in Arkansas, hired more than 1,000 workers to clear some of the land and build what eventually became nearly 500 houses. Those five room homes and 20 to 40 acres of land, along with a barn, mule, a cow, groceries, and supplies were given to qualifying families who were essentially destitute and on the relief rolls.

Like many of the New Deal programs this program was open only to whites and excluded Blacks, Jews and later banished Catholics. It would have been difficult to convince the seven members of the Cash family, who were nearly penniless and homeless, that they were the beneficiaries of white privilege; however, that was the case. Only whites were allowed to apply for the program, and in the case of the Cash family they were not initially selected. It is speculated that Johnny Cash’s uncle, who was politically connected, got them included.

There was another essential element of the program that was both key to its success and the most akin to a socialist approach. In addition to the family homes, barn and property that were provided to the recipients, the federal government built an administration building and a town center that included a community bank, beauty salon/barbershop, blacksmith shop, café, cannery, cotton gin, feed mill, furniture factory, harness shop, hospital, ice house, library, theater, newspaper, post office, printing shop, service station/garage, sorghum mill, and school – in short – an entire community.

Maybe the most important element was the establishment of a farmer Co-op that allowed all the families to pool their cash products, mostly cotton, and therefore negotiate a higher price than they could have gotten individually. The entire town operated as a cooperative in which seed was purchased and crops were sold communally. The families would then receive a share of any profits from the crops and other Dyess businesses, such as the general store and cannery. Call it socialism, or unionism or collectivism, it was the key to the resulting prosperity for these families

At first blush Rohwer and Dyess would appear to have little in common save being in the same state. However, both sites are emblematic of America. Rohwer, the internment camp, is a textbook example of America’s xenophobia and fear of people who are different, even when they are American citizens. It is also an all too typical tale of the way greed and racism conjoin. Part of the push for the forced removal of the Japanese came from white Americans who were jealous of the success of Japanese farms and businesses and coveted their land and possessions, which they promptly plundered, looting homes and confiscating farms and businesses.

While Johnny Cash’s story is a classic tale of both American empathy for the underdog and symbolic of American individualism and achievement, it was actually built on collectivism and government largess, as is the case for so many “self-made men.” And in the best American tradition it built on and institutionalized racism. To his credit Cash was not one to discount the support of family and community that gave him his start. Cash never forgot where he came from, and it was reflected in his music throughout his career. It may be that his boyhood experience picking cotton in those fields helped drive him to other lines of work, starting with his enlisting in the Air Force in 1950 and then turning to music. But while Cash left that land it seems clear that that land never left him. His music was greatly influenced by his experiences in Dyess, including such songs as “Pickin’ Time” and “Five Feet High and Rising”.

The influence of his experiences in Dyess went well beyond the songs derived directly from events there. You can hear or perhaps feel the pain and sadness, call it melancholy, in his voice, rooted in that soil where he picked cotton as a boy and where his beloved older brother died. From “I Walk the Line” to the American Recordings albums at the end of his life, you can feel the darkness. Cash always had a sense of place that was both physically grounded in the land and that spiritually encompassed God and country and people. Which is to say America. He was so perfectly American in his often-conflicting beliefs that he was claimed by everyone from country music to rock and roll to folk and gospel. No matter who you were you could see yourself in some element of who he was. This is well illustrated by what was perhaps the last song he wrote song “Like the 309”.

For good and for ill the trip from Rohwer to Dyess feels like the quintessential American Journey.