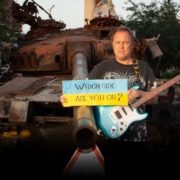 Can music change the world? Many people have asked that question and some have tried to answer it. A recent example is a new version of the classic labor song “Which Side Are You On?” produced by the poet and songwriter Bob Jensen. Bob updated the song to reflect the rise of the far right in politics and the resurgence of fascism around the globe, and how that was affecting democracy, women’s rights and more. He then put together an international folk supergroup consisting of 16 artists from six countries on four continents performing as Artists in Action who all donated their time and recording expenses. Obviously, this is a group who believe that music can and will make a difference.

Music has always been an essential element of what it means to be human. As Plato put it “Music is a moral law. It gives soul to the universe, wings to the mind, flight to the imagination, and charm and gaiety to life and to everything.” Music is about our lives, our loves and our humanity, but it can also feed our fears and breed violence. From the work of our better angels the most powerful songs have come out of the greatest quandaries facing us – the dust bowl and depression, war, civil rights, workers’ rights, women’s rights, LBGT equality and environmentalism. Even the best-known songs don’t change the whole world. Bob Dylan’s “The Times They Are A Changin'” or John Lennon’s “Imagine” reached a lot of people but the world did not suddenly change.

In this we can take a lesson from Pete Seeger, who said “Be wary of great leaders. Hope that there are many small leaders.” So it is with songs. One song will not change everything, not even a great song, but many small songs collectively will change many people. And the songs do not have to be about changing everything. Songs on specific issues and about specific cases that people can identify with can be very effective. As Woody Guthrie put it, “A folk song is what’s wrong and how to fix it, or it could be who’s hungry and where their mouth is, or who’s out of work and where the job is, or who’s broke and where the money is, or who’s carrying a gun and where the peace is.”

Songs can raise awareness of issues, rally people to a cause or concern, and build the constituency needed for change to be possible. Guthrie was the master of this with his dust bowl songs such as “Do-Re-Mi,” “Pastures of Plenty” and “Deportees.” His best known song, “This Land is Your Land”, has been and continues to be used to support many causes, such as at this rally in Wisconsin.

For my generation, the Civil Rights movement and the Vietnam anti-war movement were defining issues. Music and singing played a critical role in inspiring, mobilizing, and giving voice to the civil rights movement, with participants regularly singing at meetings and events. “The freedom songs are playing a strong and vital role in our struggle,” said Martin Luther King, Jr. “They give the people new courage and a sense of unity.” Certainly, it is hard to imagine the Civil Rights movement without “We Shall Overcome,” a song that evolved though the efforts of Lucille Simmons, Zilphia Horton, Guy Carawan, Frank Hamilton, and Pete Seeger.

Similarly, songs like Phil Ochs’ “I Ain’t a Marchin’ Anymore,” Seeger’s “Waist Deep in the Big Muddy,” Country Joe McDonald’s “I’m Fixin’ to Die Rag” and many more formed the sound track for the anti-war movement. It was these songs that rallied protestors, supported draft resisters and expanded opposition to the war.

Songs are also a means to an end. When Pete Seeger had the idea to build a sloop to sail on the Hudson River so people would come to the river and see that it needed to be cleaned up and protected, he and others gave concerts up and down the shore to raise money to support the building of the sloop Clearwater. More than 50 years later it still sails the Hudson, educating children and adults to the needs of the river and its people. Significantly the river is cleaner and healthier now than it has been in decades, fundamentally driven by the power of song.

Today the struggle for democracy, equality and human rights continues, and is under increasing pressure from authoritarians around the globe. Music is once again a critical element in the struggle for humanity and democracy. Authoritarians are not big fans of protest music. When the group Pussy Riot sang the song “Police State” Mr. Putin responded in a way that confirmed the song’s message.

Many artists today, some long established others new to the scene, continue to create songs to change the world. “Which side Are You On” is but one example. Give a listen to Tret Fure, John McCutcheon, Crys Mathews, Grant Peoples, Martyn Joseph, Billy Bragg and so many others and come away inspired, more committed, and confirmed in the value of music and community. These performers are making what I call music they don’t want you to hear, music that confronts the issues facing our world, challenges our complacency and inspires action. Be the change.

Changing the World One Song at a Time