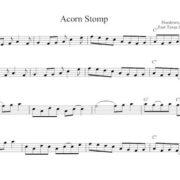 In the last column, I covered what may be the best known jam or session tune – Soldier’s Joy – but this column will dive into more obscure territory, although with a tune played by two masters of their respective musical styles: Bruce Molsky (Old-time) and Martin Hayes (Irish).

Before learning obscure tunes, it is always good to refresh your memory of the classics. I recently jammed with some high schoolers. Sure enough, Soldier’s Joy was a tune that worked really well (as did Old Joe Clark, Angeline the Baker, etc.). That actually was one of my first jams this summer because my main activity this summer has been riding my mountain bike from Mexico to Canada along the Continental Divide. That ride was a little over 2700 miles and took a few hundred hours of pedaling time. No music content, but here are my pictures from the ride.

On to today’s topic – how the same melody can sound totally different in two different settings.

My first transcription is based on a track by Martin Hayes and Dennis Cahill on their CD Welcome Back Again, a slow Irish Air entitled Coleman’s March. Martin Hayes epitomizes the fiddle music of County Clare for many people, although has his own unique style and his playing is immediately recognizable. As far regional styles are concerned, the Clare style could be characterized by a slower pace and a more wistful or even eerie feel. A contributing factor may be the use of flat keys, F, Gm, Bb, or even Eb. Coleman’s March (which sounds nothing like a march) certainly fills that description. 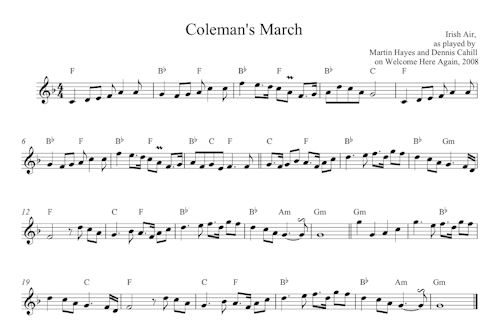 rom Bruce Molsky. It was originally recorded by the East Texas Serenaders in 1928, one of the very early commercial recordings of old-time music. Stylistically a bit between hoedown and ragtime, it leaves no doubt that this must be original American material. The East Texas Serenaders start with a 40 second Beaumont Rag-type introduction (not transcribed) before they get to the actual tune, which they then play 4 times through. I tried to transcribe the version I learned from Bruce Molsky, but he does not seem to have recorded it. So when I could not remember how Bruce played it, I went back to the East Texas Serenader version. The complete recordings of the East Texas Serenaders were recently re-issued on CD, available from all the usual mail order places, and their version of Acorn Stomp is also on a compilation CD called Old-Time Texas String Bands, Vol. 1. But if you need free immediate gratification, try this link. 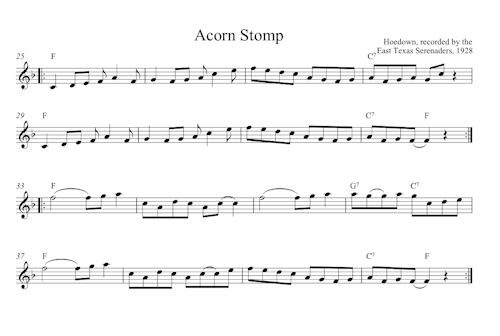 What could these two tunes possible have in common? Seems like nothing and I actually did not notice a relationship for a while. But look at the transcription: The A part is identical almost note-for-note. It will be a mystery how this melody made it into such completely different settings, but that is one of the fascinating things about living traditions.

I don’t know how useful these tunes are for playing at sessions. I would have put them into the “obscure” category, but I did hear Acorn Stomp being played in a jam at the Goleta Old-Time Fiddlers’ Convention last year.

But there was a much more important lesson for me here than learning one (or two) tunes: It is not about the notes, it is how you play them.