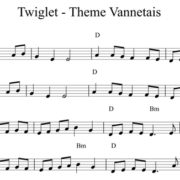 Here is a charming tune that is a lot of fun to play and very easy to learn. I first got the tune years ago from Aedan MacDonnell, a harp and accordion player in the Los Angeles area, but it faded from memory until Aedan played it again more recently at one of our local sessions. Now people request it. Everybody enjoys the tune, whether other players (who are able to pick up the key phrases after one or two rounds) or the pub audience.

It is difficult to pin down the origin of this melody. It is simple and sounds like it could be an ancient melody that made it across centuries to us, but the truth may be much more prosaic: Most likely, it was written for a French TV series in the 1970s! Aedan calls the Twiglet, which is a Morris-style dance and this tune seems to be a popular choice for that dance. More commonly, it is known as Theme Vannetais (Vannes is a town in Brittany), including among Morris dancers who use it for Twiglet. And there is yet a third source for it, namely as a Welsh pibgorn tune called Bwrlwm.

Now, one might think that the Welsh source may be the most original. After all, if it works for a pibgorn (a primitive reed instrument and sometimes used as a bagpipe chanter), maybe it has been around for a long time. However, even Welsh pibgorn players sometimes refer to the tune by its French title, so probably that is where its comes from.

I tried to dig back into history as far as I could, but the trail ends with a 1970s French TV Show, regardless of other names or uses for the tune now. That recording was made by Tri Yann, a prominent Breton music group that still tours with all its founders (Jean Chocun, Jean-Paul Corbineau and Jean-Louis Jossic – the band name Tri Yann just means the three Jeans). A strong band despite their preference for rather outlandish costumes on stage, they look more like Spinal Tap, but without the irony (so maybe more like the rockband Kiss, but Tri Yann even predate them). Here is the version from the TV show:

Morris dancers have since adopted this tune for the dance Twiglet, a serious looking stick-fighting thing. You will find dozens of versions on youtube, this is just one of many.

For a much more ancient look, a clip of Bwrlwm on a Welsh Pibgorn. Yet as you can see from the more recent discussion, including a recent addition by the original poster, no earlier source than Tri Yann seems to be known.

In any event, here is my transcription of the melody with chords, more the way I remember Aedan playing it than the Tri Yann version. The chords to the first and second part are identical, I only put a different set of chords for the B part (the last two lines) if you want something more than the basic Em-D (as in the A part, the first two lines). But Em-D are all that it takes and more often than not, simpler is better when playing with other people. 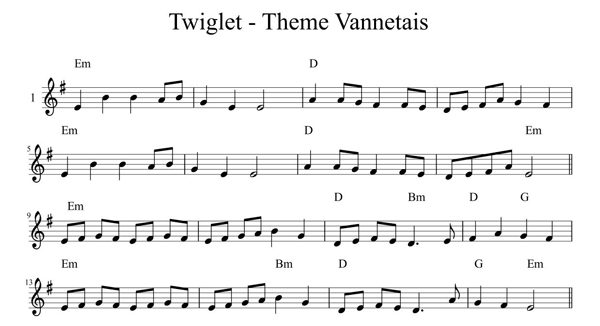