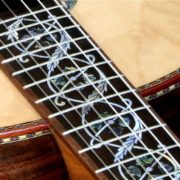 Tired of your Harley? Get a guitar! 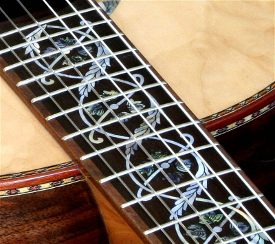 Here they come. The Cocobolo, Carpathian Burled Elm, and Quilted Maple Whatchamacallit guitars. Just when you thought your 1958 Goya G-10 was the cat’s meow. Suddenly, your 1972 Martin that sounded like heaven yesterday now seems like the high-school girlfriend you ran into last week at the market in front of the day-old bread bin.

You glance outside at the empty spot on the driveway where the Harley once waited for you. You know… the one you bought seven years ago when you reached 60 and retired from the firm and decided you deserved something special? You walked into the local cycle shop and saw the machine that you only dreamed about back in the day when you were making do with a busted out Sportster. One thing leads to another in those places, and you ended up with more stuff crammed between two wheels than Henry Ford could ever have envisioned in a wet dream. A flamed enamel paint and chrome hot fudge sundae. But the dream machine now lives in the garage under the Chukchansi Indian blanket and seemed to satisfy your inner rebel for only so long. The near miss on the 405 two years ago didn’t help. Then your wife ‘accidentally’ misplaced the keys. Sigh…

Then it happened. You were at a friend’s house and you accidentally picked up the new oversized Xyz Guitar catalogue and idly opened it to a random page and there it was, staring at you in full fourteen-by-eight glossy technicolor. It looked like it belonged either in the window at Cartier or in Akhenaton’s tomb guarded by sandstone lions. To hell with Playboy and their newly befangled forms of arousal! This centerfold beauty suddenly had your cheeks flushed, ears pounding, heart racing and your loins throbbing for salvation and release. Dark swaths of streaked ebony splashing down a light grained rosewood colored split back in symphonic harmony – curving towards and away from each other in mirror perfect symmetry – the slender speckled (freckled?) blond neck rising from the delicately curved shoulders to a perfectly executed carved head, studded with shiny black and gold machinery that would make a Tiffany couturier k’vell with pleasure. Then the description: “Cloistered elm binding surrounding aged split Madagascar Quilted Sapele, with an Adirondack Elder divide of mother of pearl and abalone inlay. Headstock inlaid with polished brass and Chilean ebony tuners. Soundboard of Northwestern Englehart-Farfel spruce.”

Jesus save me! I must have it! Price be damned! After all – it’s art!

Visions of you cradling her to your bosom, her soft curves resting perfectly across your lap, your arms pressing her body to yours, fingers fondling her neck while she sings to you in sultry phosphor/bronze contralto.

“Let’s see now…you are my sunshine, my only sunshine, you make me (pause – now the G chord… wait a second… there!) happy when skies are grey….”

TIRED OF YOUR HARLEY? GET A GUITAR!