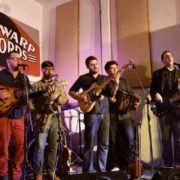 The Revelers: Cajuns, Grammys, a Saxophone, and the Tiki Parlour 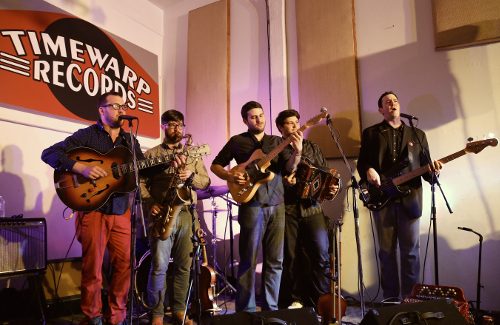 On February 12th, Louisiana’s Cajun Swamp Pop supergroup The Revelers were in Los Angeles for the Grammys. The Revelers are a band of brilliant young musicians composed of ex-members of the Red Stick Ramblers and the Pine Leaf Boys. Their instrumentation: accordion, fiddle, guitar, saxophone, electric bass and voices! As a hardcore traditionalist, I give these guys my stamp of approval, big time! Collectively, they are masters of older music styles such as Cajun, Zydeco, Swamp Pop, R & B, Old-Time and Jazz. Each member composes original songs and sings with passion and might.

When the Grammys called, I jumped at the chance to host them for an Old-Time Tiki Parlour show. The event was held at a very unique concert venue: Timewarp Records, one of the last bastions of vinyl records and vintage sound systems in Los Angeles. Timewarp has turned into one of the great underground music venues in LA and the Tiki Parlour will be hosting many more shows there.

The evening began with a new local traditional Cajun band, the High Life Cajun Band. They got the crowd peppered up and in the mood for some Cajun rock fantastic.

The Revelers rocked the house with songs from their Grammy-nominated CD “Get Ready.” They also paired down for a beautiful smaller set of traditional Cajun tunes and then back to the powerhouse of a six-piece Cajun electric band! One thing that really peaked my interest that evening is how this band brought together two very different crowds from the larger SoCal area: the Old-Time scene and the Cajun/Zydeco scene. Even the great local Creole accordion player Joe Fontenot came to see the boys do their thing! Not to mention local rock musicians as well as folkies from the area. People were hopping in their seats and dancing on the dance floor while surrounded by the faces on old Blues, Jazz and Tiki records gazing down from the shelves on high. The night was magical.

Something equally special happened that Friday morning. As part of a large documentary project that I’m working on for The Old-Time Tiki Parlour, I was able to film The Revelers’ Blake Miller, Eric Frey and Daniel Coolik (accordion, guitar and fiddle) playing some traditional Cajun tunes. Most of the footage I shoot is kept under lock and key until the official release but I decided to release one song of theirs anyways! Enjoy!

David Bragger is a Los Angeles-based instructor and player of old time fiddle and banjo music. He also photographs, films, and collects the lore of traditional artists, from puppeteers in Myanmar to fiddlers of Appalachia in The Old Time Tiki Parlour.

THE REVELERS: CAJUNS, GRAMMYS, A SAXOPHONE AND THE TIKI PARLOUR