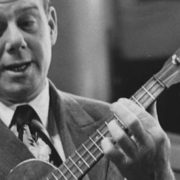 The Deadly Kiss of Fame

or How I Learned the Dark Art of Upstaging 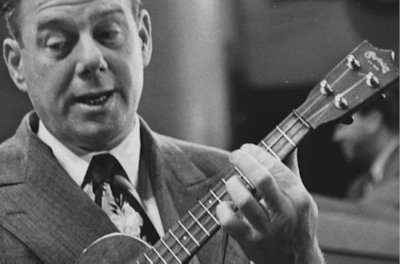 I experienced my first moment of fame in 1950 when as an eighth-grader in Brooklyn, I received an award from the Automobile Club of America for pushing Doris Whatshername out of the path of an approaching vehicle as she was crossing the street. I took my job as a junior crossing guard on Avenue J seriously. Mr. Weiss, our principal, heard about the incident and submitted my name as a candidate for the award. Three boys were chosen. Vincent Buckingham (Bronx), Santo Scarcella (also the Bronx), and yours truly.

The Auto Club paraded the three of us before the cameras of the NBC Today Show featuring Dave Garroway, The Howdy Doody Show, and the newspapers. The crowning event was a formal presentation of our medals by then governor of New York, the honorable Thomas E. Dewey. I was all of thirteen going on fourteen years old, looking forward to high school, eager to experience life and embrace my destiny.

Oh yes, and this is important. I was already on my way to learning to play the guitar. I had been smitten at summer camp a few years previously by a sultry female counselor who played guitar and sang folk songs, and I had made the immediate decision that would eventually lead me away from the world of sanity and into the blessed world of folksinging. My uncle Jack had responded to my cry and had gifted me with a Stella guitar. By the time I was to receive the award, I had mastered the basics of every Burl Ives folk song to the distress of my Jewish parents who were earnestly lobbying me to learn a “real instrument” – you know, an accordion.

Which brings me to Arthur Godfrey. A daily show at the time. Godfrey with his ukulele – bringing the sunshine and music of the Hawaiian Islands to our cold Brooklyn winters – lighting our scrabbly snow infested ten-inch TV screens with images of hula girls in grass skirts and our hero Arthur G. in his Hawaiian shirt which defied black and white screens and left color strictly to the imagination.

And his signature song:

you don’t have to be,

When you love, ukulele style…

At the time, Godfrey also hosted a weekly television variety hour that aired before a large live audience. It was Godfrey, his guests of the week, stars like Tony Bennett, Lenny Bruce, etc. Of course, he had his ‘regulars.’ Julius LaRosa was his regular crooner and Julius usually closed the show with his “big number.” Think “Anywhere I Wander” or “Eh Cumpare” and you are on the right track.

This is where the fun starts.

When I was notified that I and my two other AAA Club cohorts were to be honored on the Arthur Godfrey Variety hour, I grabbed my guitar and religiously practiced Godfrey’s signature Makin’ Love Ukulele Style on my Stella – positive that if the opportunity arose, I too would rise to the occasion. I felt it in my gut. This was going to be my big chance. 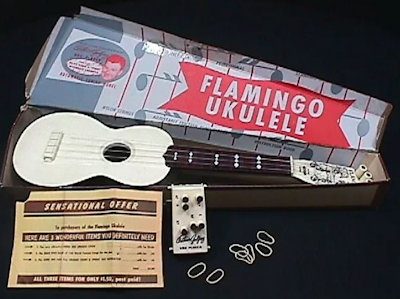 At the time, Godfrey was hawking his “Flamingo” Ukuleles which he was marketing furiously every opportunity he had. The “Flamingo” ukulele was a plastic instrument that came with an attachment with buttons that actually played chords – C, C7, F, G, etc. The attachment advertised “Play without lessons”. One simply pressed the buttons with one hand, strummed with the other, and voila! Instant ukulele maestro! A true entrepreneur, Godfrey missed no opportunity to advertise his signature ukulele.

The big night presented, and there we were, at CBS TV Studios on 52nd Street in New York. We provincial Brooklynites always referred to Manhattan as “New York” as though it was a different city. It was.

Julius LaRosa was warming his voice backstage as three pubescent Auto Club of America teen heroes, Vincent, Santos, and Arthur, waited to go on stage before a television audience of who knows? Thousands? Millions? Billions? A thirteen-year old’s imagination can’t calculate figures that are real.

The large hulking cameras glided on silent rubber wheels around the stage as Godfrey talked, sang, joked with his guests. La Rosa, with tissue paper stuffed into his collar to prevent his makeup from running onto his white tuxedo shirt, stood backstage like a matador, ready for his big closing number.

The show was winding down toward the end.

“And now, I’d like to introduce three young heroes, who, at the risk of their own lives, rushed into traffic to save the lives of their fellow classmates. The winners of the American Automobile Association Life Saving Award for 1950, here are Vincent Buckingham, Santo Scarcella, and Arthur Podell!” Applause as the three of us trooped out to center stage in the suits our parents had bought for us, klieg lights blinding us, and the red-eyed camera staring at us while the audience applauded and cheered.

Out of the corner of my eye, La Rosa waiting for his closing introduction as soon as these three bothersome kids got off stage. The tissue paper now gone.

Not so fast Tonto…

Godfrey: “As a special gift, I’m presenting each one of you boys with a genuine Islander Flamingo Ukulele.

My moment had come! I took the present from Godfrey’s outstretched hands.

“You know, I know how to play this thing.”

Stunned silence, then a burst of applause.

Opening the cellophane windowed box, Godfrey handed the ukulele to me. I handed the box with the plastic gizmo back to him, leaving the bare ukulele in my hands.

La Rosa now waving his arms frantically pointing to his wristwatch with large sweeping motions …”noooooo….get them off…”

My moment: “could you tune if for me Mr. Godfrey?”

More applause, then a loud bang from backstage, which was explained later by a large hole in a dressing room wall we observed when we exited the stage.

Back onstage, Godfrey gently shoved me closer to the giant red eye:

Opening chords, C, C, G7… carefully strummed as I had practiced at home, then…leaning in the direction of the large microphone suspended over my head, I sang:

I finished the first verse, began the second as the audience started applauding louder. I watched the director waving Godfrey to keep it going as I continued to the second verse while the applause grew stronger as the camera with the red-eye moved closer.

I ended the song with a flourish and a bow.

I could hear what sounded like crashing furniture amid the sound of tumultuous applause as the director behind the camera was making wide circles in the air above his head with his index finger signaling Godfrey to wrap things up.

“Well, I see there’s no time left so…Good night all, join us next week.”

The crowd was still cheering as the three of us were ushered past a glaring red-faced baritone crooner, his right hand wrapped in a towel, out into the hallway where our proud parents waited to hug us and kiss us.

Epilogue: Julius LaRosa passed away in 2016, and I never apologized. Julius, if you are up there listening or reading this…I’m sorry…but that’s show biz…y’know?

THE DEADLY KISS OF FAME