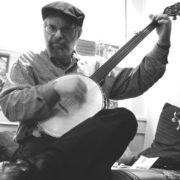 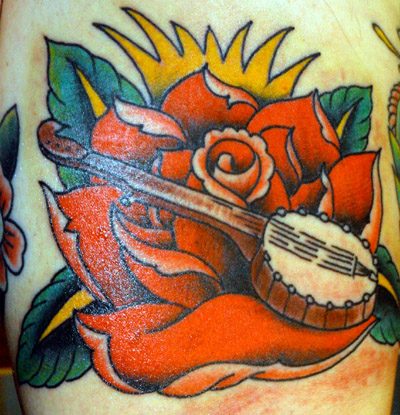 One may recall the story from last issue about my meeting with traditional tattoo master/banjoist Scott Harrison. Since that article, I’ve revisited him in Portland, OR to complete the tattoo he started in December 2006. It was the most painful banjo experience of my life. He gave me a vintage style rose with a fretless minstrel banjo cradled within its petals. In fact, banjos were quite the theme of the day. I randomly met three clawhammer banjo players just hours before arriving at Atlas Tattoo. Portland certainly lives up to its reputation as an old-time music hub!

As Scott machined the ink into my inner arm, we discussed banjos and tattoo classifications among other things. He noted that the categories used to classify tattoos are very limiting these days. It’s true. Most tattoo converts feel compelled to get some “meaningful” tattoo which then must fall into one of a small handful of genres (Japanese, black and gray, neo-traditional, bio-mechanical, etc.). In a moment of glorious insight he mentioned that clients never get a design simply because it’s cool or has “soul.” What a brilliant observation. I started to think about old-time music.

The Skillet Lickers had soul. Wade Ward and Louie Bluie sure did. Why do so little of today’s traditional artists achieve some of that mountain soul and old-time plantation funk that we hear grooved into those old 78s and field recordings? It’s not an easy question to ponder. Many modern string band recordings seem to recreate festival jam sessions that the musicians may find trance-like and/or nostalgic. Some try to replicate their favorite Kentucky or West Virginia chestnuts on CDs dedicated to only one sub-genre of old-time music (ex. instrumental fiddle tunes). Many of these old-time recordings just sound like friends jamming in a kitchen (one of my favorite activities, I might add). Possibly, old-time soul or “Mojo” is a genetic gift given to very few today and found on even fewer recordings. In 2004, however, I was lucky to find some.

Three summers ago during an epic road trip of fiddle tune collecting, visits with old masters, and long nights of old-time festival revelry, I left the Clifftop Appalachian String Band Festival with a stack of CDs. About half of them were old recordings of deceased traditional music-makers and the others were newer items by contemporary string bands and traditional artists. I always support the new but I usually end up listening to the old. Each year I find myself confronted with more and more of these independently produced old-time CDs. Although I’d listen to many of them before modern radio, they usually fall flat and wind up collecting dust behind my ceramic tiki mug collection. There are too many available recordings of the same trendy fiddle tunes with that homogenized festival sound that I mentioned before. If there is noteworthy musicianship, it’s usually masked by hokey, poorly recorded, and unnecessary bass playing. It seems that modern bands pander to a modern pop radio palette by adding the superfluous bass to their wall of sound. If one of these groups thought of leaving it out or included bowed bass or cello like the East Texas Serenaders, they might be on to something. I hope they’re taking notes. But let’s move on to the heart of the matter… 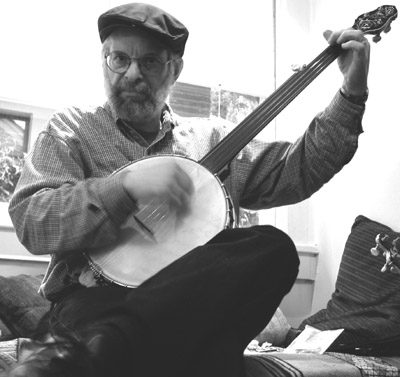 In my opinion, the finest modern old-time recording is Waitin’ on the Break of Day: Old Time Music on Fretless Banjo and Fiddle by Dan Gellert. For most old-time aficionados, I’m just preaching to the choir. They can stop reading now. But for those of you that are new to the old-time genre, I will tell you what I tell my fiddle and banjo students: This CD delivers old school Mojo. Very few artists and recordings today can pull this off. Like the shamanic witch doctor, Gellert weaves together a spell using the ingredients and incantations passed down to him from old. Unlike the tribal charlatan however, Gellert harnesses a real dimension of time and space and produces wonderful results with his fretless musical wands. He also adds quite a few flourishes of his own in the form of booty shaking syncopation with his horsehair stick and beatskin thumb. I will not give you a play by play review. Listen to the CD. If track 1 Eph Got a Coon doesn’t seduce you with 19th century funk, then exchange the CD for a Bela Fleck or Dick Van Patten spoken word album. I’m sure you’d love them.

Gellert sounds like a resurrected musician who would have been recording in the 1920s and 1930s. He doesn’t sound like a modern interpreter of a great master, but like one of the gods from the old-time pantheon of mountain string players that never was. His style is entirely rooted in the tradition yet transcendent. Like the legendary fiddlers and banjoists of old, he takes things to a level beyond his contemporaries. He effortlessly embodies the vintage stylings of old-time source material while translating them with a type of musical invention that should remain wordless. In short, he is doing what Dock Boggs, Edden Hammons, Howard Armstrong, and Rufus Kasey were doing. He’s playing with serious Mojo, groove, and soul.