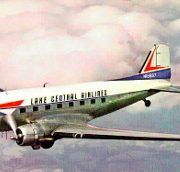 Or, Why Larry Ramos Lived to A Ripe Old Age

The life and times of a group of touring musicians 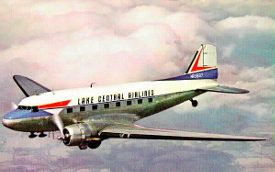 November 1, 1958: A Cubana Vickers Viscount en route from Miami to Varadero to Havana is hijacked by Cuban militants.

April 15, 1959: A plane is hijacked from Cuba to Miami. The hijackers were four members of Batista’s Army.

Ever see a DC-3? It’s a stubby airplane that holds about twenty-seven passengers. Resting, the nose points up at about a 35 degree angle while the tail sits about three feet off the ground on a single wheel. Passengers climb aboard on steps that are built into a door at the rear that swings out suspended by two cables, one on each side of the steps. When everyone is in, the door folds back into the plane, steps and all. There is no other entrance or exit. Everyone boards and leaves through that door—passengers, pilots, and one stewardess. The DC-3 is noisy and slow, but with a little luck you can land it in a cornfield if you have to. Even though it has been retired from most regular airline use, hundreds of them are still in service.

In 1962, everyone who flew was aware of the remote possibility that their flight could be hijacked to Cuba. It had happened three times in the previous three years and although some fears disappear in the light of day and reason, our secret fears of flying always seem to surface as we buckle our seat belts.

When you last flew, did you check the other passengers to see if any of them looked suspicious? Of course you did—we all still do. Back then it was ‘Hispanic.’

On this particular morning, The New Christy Minstrels boarded a Lake Central Airlines DC-3 at Chicago’s O’Hare Airport. It was late 1962, and we had finished a season of appearances as regulars on the NBC’s coast-to-coast show, The Andy Williams Show. Now, we were reaping the rewards of fame with night-after-night college concerts—up in the wee hours into cars to the airport and onto a plane to the next show. We were big-time in the mid-west, and we were forever changing planes at O’Hare for a Lake Central Airlines DC-3 to any town that had a college and could afford us. Lake Central Airlines serviced all the cities around the Great Lakes not serviced by the larger carriers.

This day, things were no different. Bleary-eyed and coffeed, we trudged guitars in hand onto the tarmac like a line of sleepy ducks, and along with the other passengers, climbed the five or six suspended steps into the familiar sausage fuselage of a Lake Central Airlines DC-3, and found our seats. I found an aisle seat on the left side of the plane facing the front about three rows back from the cockpit. In those days, the cockpit doors were just that­—doors. No lock, just a handle. Across the aisle to my right, Nick Woods, dark shades, head back, napping.

Mild conversation…  the snap of seat belt buckles… laughter… chatter… Clarence Treat joking with the blonde stewardess at the back of the plane. It was her first flight as a stewardess and Clarence was congratulating her… laughs, giggles…the sound of the door closing… …the captain welcoming us over crackly speakers… the burp of propellers laboring to turn… coughing engines… conversation and the mild scent of jet fuel as overhead air jets kick in and hiss… the symphony of propeller travel… bump along to the runway, then, the surge of speed… look out the window as the tail rises even with the nose and the horizon straightens… then a shudder as wings lift you off the ground into…

Lay your head back and try and doze…

Turn around, and sure enough the damned door has swung open and is hanging outside the plane as O’Hare slowly retreats into the distance and our DC-3 continues its climb, totally unconcerned that its fly is wide open.

We’re going to die. The door going to shear off, damage the tail and bring us crashing to earth? …“We interrupt this program for a special announcement: The New Christy Minstrels…” Mom wearing that awful black stole to the funeral. Why me? What a stupid way to die.. please, not now. Not yet…

Wait a minute… that wasn’t a female voice…

Nick: “Did that sound like the stewardess or Clarence?”

Me:  “Sounded like Clarence to me, come to think of it”

Ever see an old lady in a car beside you on the freeway, eyes wide, jaw clenched and mouth open in terror, clutching the wheel in a death grip? Well that was her. Poor thing, her first flight and she forgot to lock the door. Now she was strapped in her jump seat with the ‘old-lady-on-the-freeway’ look on her face. Nothing short of a cattle-prod (Tasers hadn’t been invented yet) or a crow-bar could have moved her.

Someone yells: “We’ve got to tell the captain!”

“Yes, Yes,” sing the New Christy Minstrels, “we’ve got to tell the captain.”

Heads turn and here comes Larry Ramos, our wonderfully talented Hawaiian/Philippine Minstrel, charging up the aisle toward the cockpit, a look of committed purpose on his face.

I look at Nick. Nick looks at me and instantly we both see the headline:

Now, not too many people know this about Nick Woods. He was quiet, usually slow moving and gentle to look at, but trust me, the guy was a coiled spring with physical strength and athletic coordination you’d never suspect. Nick was a cat. I’ve seen him water ski at full speed with only one foot touching the water, one hand holding the line and the other straightening the lock of hair that forever was falling into his field of vision so casually, it looked like he was standing in front of his bathroom mirror. I once saw him ‘stroll’ out onto a tenth story window ledge in a New York hotel to retrieve a piece of paper that had blown out of his hand like he was bending over to pick up his socks.

No one knows how it happened, least of all Larry, but before you know it, Larry is sitting in Nick’s seat with a puzzled look on his face and Nick is in the cockpit.

A minute later, the loudspeaker cackles reassuringly: “Not to worry folks, just stay in your seats with your seat belts buckled and we’ll be returning to O’Hare to close the door. We’re in no danger.”

That was it. Later, I asked Nick what had happened.

“Well, I just walked into the cockpit as casually as I could, trying not to alarm anyone, and asked ‘Hi guys… say, what do you think you’d do if you took off and the rear door was still open?’ The pilot turned around and said very seriously: ‘You’re kidding, right?’ so I said, ‘Not really.’ Then the pilot asked me if everyone was buckled in, and I said ‘yes, I thought so’ and then he said, ‘Where’s the stewardess?‘ ‘Frozen,’ I said, so he said ‘we’ll take care of this, thanks.’ Then I left, came back in and grabbed a seat.”

That was it. We circled back to O’Hare and landed, closed the door and took off again.

I haven’t thought about that incident in years. I suppose if it had happened today, it would be all over the news channels and someone would be suing the airline for severe emotional distress and making a book deal. But I guess sometimes some people just take things as they come, and do what they do without fanfare because it’s what you are supposed to do.

Epilogue: Larry Ramos later became the lead singer and owner of ‘The Association.’ He left us a few years ago. Nick Woods left us in 1971 in a tragic accident. Clarence Treat retired from the Los Angeles County Fire Department as a Captain and still sings whenever asked. His tenor voice is as clear as ever. He prefers driving over flying.