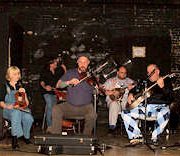 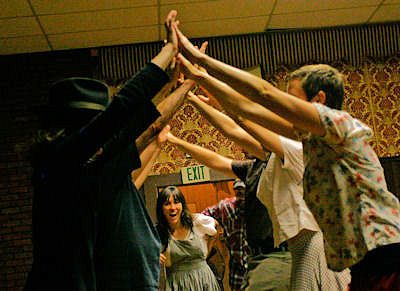 On a Saturday night in Highland Park, dancers, musicians, hipsters, photographers, freaks, soldiers, artists and grandmothers descended on the American Legion Hall for a night of old-time revelry. A large antiquated ballroom full of history, honor, dust, foot stamping, alcohol, and the siren sounds of string musicians served as a classic American backdrop to the calls of the square dance… 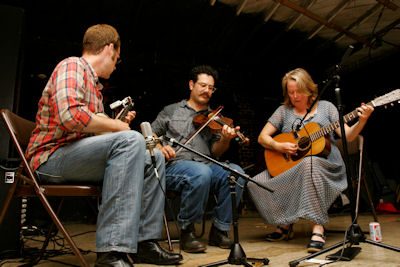 Everybody join hands and circle to the south,
Put a little moonshine in your mouth
Now it’s time to circle back,
Make you feet go wickety-wack

Ben Guzman, Kelly Marie Martin and Mike Heinle of the Los Angeles old-time string band Triple Chicken Foot spearheaded this square dance revolution in 2008. The idea was to bring square dancing to Los Angeles while cultivating a stronger sense of community in a city where neighbors don’t always know each other. On April 23rd, they succeeded in getting people to touch each other in ways that were new and foreign!! To the pulsing fiddle/banjo/jug band rhythms of Sausage Grinderand the infectious trance tunes of old-time power trio Triple Chicken Foot, square dance pros and tons of newbies (like myself) touched, sweated, bounced and twirled to the calls of the callers. During the Sausage Grinder set, SG vocalist Bobby Reed brought several dances to the floor that he picked up from his own square dances in Durham, North Carolina and during the TCF set old-time musican/caller Jordan Ruyle commanded another impressive set of diverse dances. Unlike music heard in many contra dances, the music of the Saturday night Squarevolution was not a fusion of Americana, Celtic, jazz, etc. Instead the bands provided a solid core of classic old-time tunes that emphasize the downbeat and strongly echo the droning, syncopated sounds of Appalachian barndances and mountain music. Such tunes as Brown’s Dream, Hawk’s Got a Chicken and Flew into the Woods, Carbolic Rag, and Trouble in the Mind were hammered out by the bands while the dancers feverishly spun and gyrated. It’s been a dream of mine to see something like this happen in Los Angeles, especially to fiddle at an event like this. Thanks to Ben Guzman and TCF we can all roll up the rug and dance all night!!

If you missed this event, there will be more. On Saturday May 14th, both dance bands will be fusing together for a Sausage Foot Monster Mash band at an epic square dance, part of the Los Angeles Old Time Social. It will be a day of old-time music workshops (fiddle, banjo, singing, guitar, etc), jamming, cake-walking and a squarevolutionary dance!! See you at the dance…

David Bragger is a Los Angeles-based instructor and player of old time fiddle and banjo music. He also photographs, films, and collects the lore of traditional artists, from puppeteers in Myanmar to fiddlers of Appalachia. Contact David Bragger.