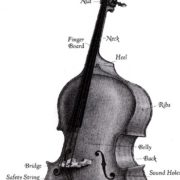 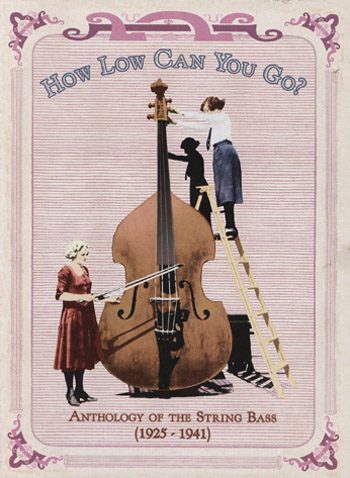 When not in the hands of local old-time fiddle guru Mel Durham, it just seemed to muddle things up in those early jam sessions. I’m surprised guitar players, the real victims, have not resorted to suicide bombing just to rid a few jam sessions of these gargantuan bass beasts. In past articles I’ve been quite vocal about my disdain for the instrument as a member of the old-time string band. The only exception in my opinion is bowed bass and cello, which is something we rarely see or hear anymore in old-time music. Simply put, the plucked bull fiddle has a permanent spot in the arena of jazz, art music, drunken rockabilly antics, bluegrass, country swing, etc. and that’s where it should stay.

As I bring my bass rampage to a close, I want to let you in on a startling bass-related occurrence: the recent box set release from my favorite modern record label, From Dust to Digital. This set, entitled How Low Can You Go? Anthology of the String Bass, is a perfectly conceived package for bass lovers as well as old-time bass adversaries. The 3 CD set with 96-page booklet is a near perfect compilation of 78-era recordings from bands that actually knew how to use the bull fiddle, or “doghouse.” The booklet contains essays, newspaper clippings and extensive notes about the featured bands, musicians, and most importantly: the bass players. Browsing the old photographs is another benefit to enjoy while listening to this awesome set. 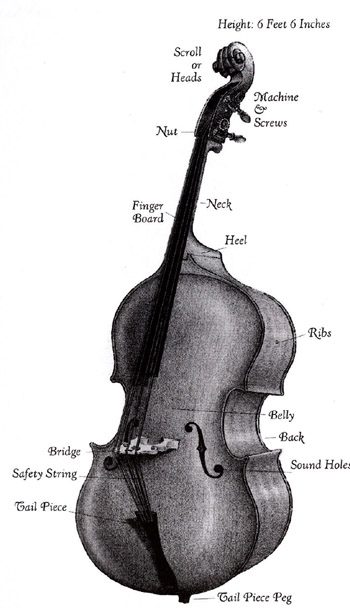 At first I expected the set to only consist of novelty recordings that showcased bass hokum and nauseating bass acrobatics. I was very wrong. While the “bass” is the common thread running through each track, the tracks are noteworthy for a variety of other reasons. In fact, the bass is usually just background to some of the best bands from the era. The strange arrangements, brilliant musicianship, classic tunes, comedic personalities, and musical history are all in the foreground here.  Not the bass.

Disk One offers tunes from 1925-1930. Jelly Roll Morton’s Black Bottom Stomp is an explosion of early New Orleans ensemble playing. The second musical theme of the track is recapitulated in the tune Wash-Board Cut Out by Bobby Leecan’s Need-More Band. This cut is by a group playing in the southern ragtime string band style. There isn’t even a bass, but there is an aggressively played bowed cello! Additional tracks which do have bowed bass are Frenchy’s String Band’s Texas and Pacific Blues, Jimmie Rodgers’ Waiting For a Train, and one of my all-time faves: The Dallas String Band with Coley Jones sawing and plucking the song So Tired.

Disk Two, covering the years 1931-1941, has many highlights. Andy Iona and His Islanders did a fabulous recording of Ta-hu-wa-hu-wa-i (A Hawaiian War Song). It’s a track that is aimed at moving your hips. You’ll feel like a character in a Max Fleischer cartoon as you gyrate uncontrollably. Some familiar names in old-time, early country and swing are present as well: Bob Wills, Prairie Ramblers, and Roy Acuff & His Crazy Tennesseans. With them you get charged southern vocals, flashy steel guitar, and even some manic fiddle playing. Washboard Sam’s version of Don’t ‘Low is hands down the best I’ve heard. It’s a wonderful tune, with hot vocals and an unbeatable rhythm section: Sam on washboard and country blues legend Big Bill Broonzy on guitar. The bass player is unknown and very adept. Carl Martin, State Street Boys, Duke Ellington, and Cab Calloway keep ’em company on this disk along with many more early masters.

Finally, Disk Three is a compilation of even more bands that all have one common denominator: bass player Bill Johnson. Johnson lived from 1872-1972 and was a pioneer in jazz and ragtime. The tracks speak for themselves. Not only did his bass-playing maneuver around the beat with virtuosic ability, his crazed high-pitch voice is often complementing his bass on many of these tracks. We also have the great fortune of hearing him with fellow vaudeville singer/female impersonator Frankie “Half-Pint” Jaxon and slide guitar master Tampa Red. Another one of my favorites is My Four Reasons by “Banjo” Ikey Robinson. I first saw this performed in Louie Bluie, a documentary about Howard Armstrong from the 1980’s.  This original track has some raucous violin playing that wildly interweaves through the sonic artistry of Johnson’s bass and Robinson’s banjo. A real masterpiece!! I’d buy the set for this cut alone. Let me know what you think.

David Bragger is a Los Angeles-based instructor and player of old time fiddle and banjo music. He also photographs, films, and collects the lore of traditional artists, from puppeteers in Myanmar to fiddlers of Appalachia http://www.myspace.com/davidbragger