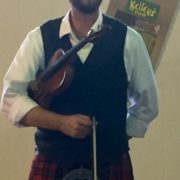 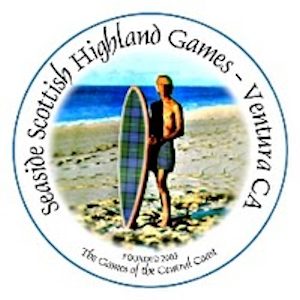 Several Scottish Highland games gatherings are held across Southern California, and the Seaside Games in Ventura are the last one of the year. While Scottish games/gatherings are a commercial activity propped up by vendors, competitions in bagpiping, dancing, fiddle, and heavy athletics are more than just a side show. Together with many community groups, there is a lot of interesting music and exposure to other social activities. Of varying quality, for sure, but interesting. My view of the good, bad (or maybe ridiculous), and ugly:

The Good: Seeing and hearing a variety of social/cultural activities that are outside the mainstream

Bagpipe and drum groups dominate the aural and visual scene outside the exhibition halls (vendors). Highland games gatherings typically have a wide range of piping and drumming competitions, including solo piping and drumming, small group ensembles, and full pipe bands. Here is the UC Riverside Pipe Band parading down the main street.

A memorable event is the massing of the pipe bands, usually at the opening and closing ceremonies of the games. The musical content of the massed events tends to be rather thin, Scotland the Brave or Amazing Grace, but a few hundred Highland pipes and drums can make quite the ruckus. Even outside the massed events, the bagpipes drown out even the Celtic rockers, which are located a bit further away from the main activities. The rock stages are on the way to the athletic events. I’ve never stopped more than a few minutes near the rock stages, though.

The athletics are advertised as “This is where you see large men throw stuff”, but there are also women throwing stuff (very few, though). I haven’t figured out the rules, but it is a combination of a number of events where you throw stuff around – usually heavy or awkwardly shaped. Hard to imagine more awkward-shaped object than the pole in the caber toss: a competitor holds a long log/pole upright, runs forward with it, and then tries to toss it so that it turns over, strikes the ground with the opposite end and topples over. Competitors are judged on how closely their throws approximate the vertical landing. The caber is 16-20 feet long and can be as heavy as 180 pounds.

The sheaf toss, where a 20-pound bundle of straw has to be tossed over a raised bar (like the ones used in pole vaulting) with a pitchfork seems more feasible. This attempt made it over the bar: 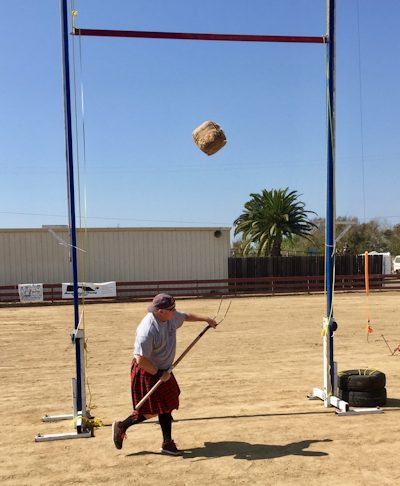 On the way back from the athletics, I passed this Fifes and Drums group. They were as loud as a bagpipe group and their repertoire overlaps substantially with Old-Time American fiddle tunes (or 18th century Scottish tune collections), including Devil’s Dream and Soldier’s Joy.

Fiddles, usually the noise makers among string instruments, are the quiet indoor instruments at Highland games. The fiddle contest takes place in a livestock barn that was cleared out of livestock (but not their smell). At Ventura, the fiddle contest is a more recent addition, organized by Shauna Pickett-Gordon, a co-founder of the Scottish Fiddlers of Los Angeles and later the Peninsula Scottish Fiddlers in Northern California. It is a very small contest and may be difficult to grow. The style is specialized and the rules complex, creating a high hurdle for new entrants. Colyn Fischer, a two-time US National Champion in this style himself, judges the event and provides feedback to participants. It almost becomes as much of a master class and group instruction as a contest. At the beginning, he gives an informative demonstration of the different musical forms in this style that would deserve a bigger audience. “Scottish music is a Celtic music like Irish or Welsh. Unlike those other traditions, it has a very literate background and traditional music in Scotland was written down earlier than in other countries,” says Fischer. 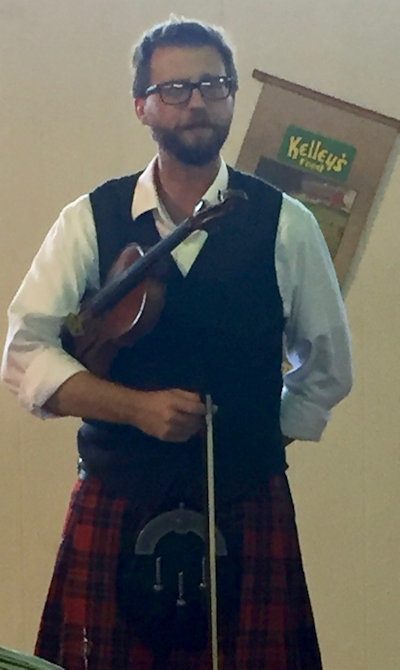 There is a Harp Gathering as well, although I didn’t see it, with information on the history of harp development, workshops on playing skill, and different ensemble performances.

The Bad (or rather Ridiculous): History as authentic as Disneyland

Like most fairs, commercial vendors support the economic feasibility of those events, even if there is a lot of volunteer work (contests, community groups). Vending is covered by a veneer of invented Scottishness from the Victorian era. There even is a term for it: “Tartanry”, which refers to the kitsch and ahistorical elements of Scottish culture that had been superimposed on the country in the 19th century. Nowadays that includes fake swords from China and bagpipes from Pakistan, but the dress codes, music styles, and even modern Highland games are largely a 19th century invention, which itself built on the distortions of the romantic era. Probably the most egregious is the invention of clan tartans by two English brothers who moved to Scotland and pretended to be descended from royalty. Yet their fantasy book on Scottish dress code sets the standard.

Romanticism in Scotland was an artistic, literary and intellectual movement that developed between the late eighteenth and the early nineteenth centuries, partly a reaction against the Age of Enlightenment. In Scotland, it manifested itself in the belief in the existence of the mythical bard Ossian (the alleged author of a 1400-year-old epic that was “found and translated” by James Macpherson, who then was in his early 20s), the works of Robert Burns, and the historical fiction of Walter Scott (e.g. Waverly). Scott’s novels helped creating a romanticized view of Scotland and the Highlands and left a lasting imprint on the perceptions of Scotland.

The arts then led fashion. Tartan and the kilt became popular among the social elite outside Scotland, including Britain’s King George IV, who visited Scotland in 1822. The fashion for all things Scottish was maintained by Queen Victoria. Her Highland enthusiasm assured the popularity of the tartan fashion and a large number of Highland Games (that continue to this day) started during her reign.

Two brothers from England, John Carter Allen and Charles Manning Allen, play a big role in the invented traditions of Scotland. After changing their names to John Sobieski Stuart and Charles Edward Stuart, the brothers became prominent members of Scottish society with their claim that they were descended from the Royal Stuart line, and their grandfather was Charles Edward Stuart, a.k.a. Bonnie Prince Charlie himself. Sobieski is the surname of the princess who married James Stuart, the Old Pretender and father of Bonnie Prince Charlie. The brothers claimed to have documents from Bonnie Prince Charlie, including a manuscript from the sixteenth century that detailed a number of old clan tartans from both the Highlands and Lowlands, although the stories about how those documents were obtained and their location changed over times. While unable to convince more influential opinion leaders like Sir Walter Scott, it did not discourage them from publishing their Vestiarium Scoticum on tartans and Scottish dress in 1842, followed by additional fantasies about medieval Highland Scotland in The Costume of the Clans. Their inventions apparently went a bit too far and fairly soon were exposed as frauds, and they had to leave Scotland for the rest of their lives (they returned after their deaths and were buried in Scotland). Their elaborate work of imagination in Vestiarium Scoticum outlives them as the guide book for Scottish dress to this day. Indeed, I saw the book referenced at several vendor booths as the authority on clan tartan patterns. While the Vestiarium Scoticum and its background material were complete forgeries, it created a new history.

This history of these events as it is told and retold is imagined to stretch back into the earliest middle ages. While largely apocryphal, I can see some appeal to that romanticized past. But narratives about ancient wrongs to be avenged and the victimization stories at the hands of the English start grating on me. Proud nationalism is separated from racism by only a small gap, and the Scottish nationalism on display has a “Make America Great Again” quality to it that makes me uneasy.