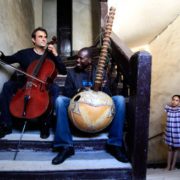 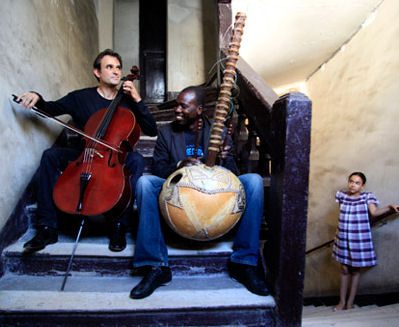 One of my favorite analogies about music is that the vast, ever-changing torrent of audibles passes by like a mighty flowin’ river of sound. Currents, eddies, subtle and not-so-subtle fluctuations affect the journey from the source all the way downstream, with one’s own perspective subject to its constantly shifting nature from moment to moment. As I thought about a title for this new semi-irregular, semi-irreverent Folkworks column, I’ve chosen to hang my editorial hat on that “Mighty Flowin’ River” moniker.

It’s appropriate with this first installment that I lead off with a review of the March 14 concert at the Skirball Cultural Center from a master of the West African harp-lute that exemplifies that riverine feel, kora player Ballaké Sissoko. Joined by his partner in global-fusion acoustic bliss, Vincent Segal, the Malian maestro and French cellist drew on tracks from their smash (in Europe anyway) Chamber Music joint venture and Sissoko’s gorgeous new album, the fittingly titled (in light of the recent troubles in Mali) At Peace, just released on Six Degrees. The telepathic interplay and obvious joy shared by the two resonated repeatedly on a fire-and-ice range of tunes from the ancient griot and Malian regional songbooks, as well as original yet timeless compositions and material inspired by or coming from other parts of the world, such as the duo’s inspired, uber-melodic cover of Brazilian sambista Luis Gonzaga’s Asa Branca.

I’m a sucker for a well-played kora, and only Ballake’s pal, the incomparable Toumani Diabate, and Toumani’s cousin Mamadou match up among those I’ve heard in terms of virtuosity on the classic instrument of the djeli. His fingers accelerated lush arpeggios akin to the fluttering of hummingbird wings or the rush of cascading rapids (believe me, that circle is not unbroken), then relaxed into a stately yet pastoral-funky Mande twang. But this is a partnership of equals, and Vincent is no slouch, a classically trained, big-eared beast on the contrabass’s smaller sibling, as apt to slap and tickle the cello percussively, as to bow, bap and pluck the strings in a pizzicato flourish. The Frenchman also provided some charmingly accented between-song banter, comparing himself to Inspector Clouseau at one point and remarking how happy they were to be in Los Angeles after performing in chilly Ohio. If I were to offer one minor complaint for an otherwise wonderful evening of music, it’s that the sound mix was a bit too genteel. Ballake’s kora could/should have been louder, giving all those mellifluous microtones more chances to disperse into our physio-molecular selves.

There’s a sonic kinship between the 21st century blues-rock of the Black Keys and the Saharan desert-blues of Tinariwen, Terakaft, and Omara “Bombino” Moctar, a linkage now forged via the production acumen and tasteful deep-dabbling of the Keys’ Dan Auerbach on Bombino’s new release on Nonesuch, Nomad. The young Tuareg’s sometimes searing, always trancey guitar riffs take on a new, even-funkier, and, yes, multitracked heft on the bracing Amidinine and Her Tenere (In The Desert), while showing his contemplative side on Imidiwan. His earnest vocals, sung mostly in his native Tamashek, plead for unity among his nomadic people (although from Niger, his people are also enmeshed in the Malian crisis) or address matters of the lovestruck heart. While Bombino’s next Southland gig has not been set at presstime, his mentors Tinariwen will be swinging through the area in April, playing the Desert Daze fest in Mecca, CA, on April 20 and the Hollywood Forever Cemetery the following day. 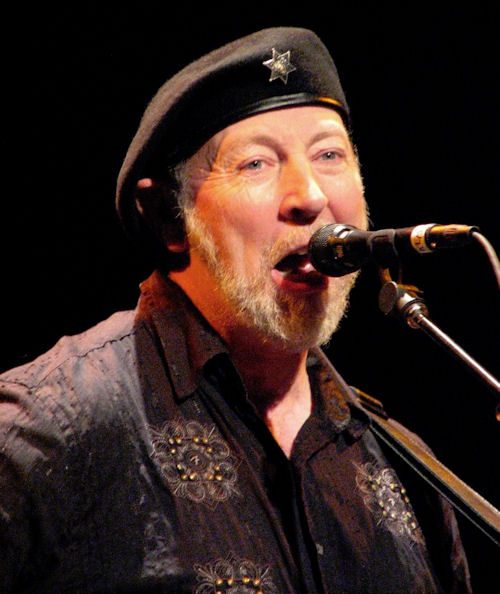 Buddy Miller provides the connective tissue between a pair of recent releases on the New West label. Miller produced Richard Thompson’s latest, Electric, which finds the ageless former Fairport Conventioneer in wryly intense lyrical-vocal and guitar-slinging fettle. The album title may be a bit deceptive, as acousticisms such as the gorgeously melancholic duet with Alison Krauss The Snow Goose, intersperse with the man in the black beret’s whipsaw Anglo-delic folk-blues outbursts on the likes of broodingly poppy Good Things Happen to Bad People and the proud-stomping opener Stony Ground. That last one, like many cuts on the album, features the classic male-angsty Thompsonian outlook in its chorus:

Silly old man with his teeth all gone

Poking his nose where it don’t belong

She’s a rose all right but she’s got thorns

Recommended for Thompson aficionados and newcomers alike. The Brit expat and his trio will take over the John Anson Ford Theatre in the Hollywood Hills on May 17.

Miller steps into the performer slot as part of a duo with alt-country-folk mainstay Jim Lauderdale on the charmingly titled romp, Buddy and Jim. The twosome’s voices fit together comfortably like the proverbial broken-in pair of shoes, mixing lead vox and unison-singing on the verses. This is definitely a country record, a most enjoyable downhome slice of the honky-tonky and tear-jerky, without any outsized Nashville pretensions. Break out the hanky for That’s Not Even Why I Love You and It Hurts Me, while a move to the dancefloor is recommended on the cowboy-rumba South in New Orleans and bluesy shuffle Looking for a Heartache Like You. Miller and Lauderdale are taking their act on the road with an ace backing band, playing the Troubadour in West Hollywood, May 14.

Local psychedelic country-rock favorites I See Hawks In L.A. (part of the Folkworks fund-raiser lineup) have been setting up shop at the Cinema Bar for a “First Friday” residency that continues into May. I caught the lads’ March and April gigs at the cozy Culver City watering hole, where they were joined by friends Richie Lawrence on keys, squeeze, and voice and Mike Tempo on percussives during the former date and singer-guitarist Rick Shea during the latter. As usual, they didn’t disappoint, blending familiar (including a pair of epic “Humboldt” jams), fresh-baked songs (bit of gospel flava seeping in), and a sprinkling of well-chosen covers (Merle, Van, Bob, the Dead, Rivers of Babylon), all processed through their inimitable wtf-Americana sensibility. Speaking of new stuff, bandmember Paul Lacques told me the group recently completed a brand-new album titled Mystery Drug for the German label Blue Rose (which has put out other Hawks records); the release will street May 25 in the U.K. and parts of Europe, then get its Stateside release later this year. I See Hawks will be on the road in Deutschland for a whirlwind 10-date tour the latter part of May, and will fly back over the pond in June for a couple of weeks in Scotland and England.

Over nearly three decades of writing about that mighty flowin’ river of sound for dozens of different publications, Tom Cheyney has forgotten more cool tunes and great shows than he can remember, but still keeps coming back for more. He lives in northeast Los Angeles with his wife Cassandra and daughter Brenna Amidinine