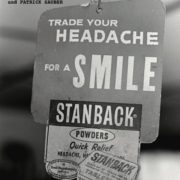 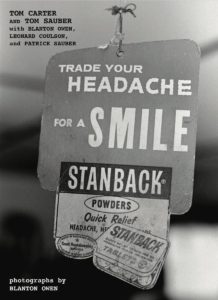 As a folklorist focused on the traditional music of the United States, it’s always a pleasure to come across a project that exemplifies the folk process. This is the case with Tiki Parlour Recordings’ Trade Your Headache For a Smile, a two-disc set featuring Tom Carter and Tom Sauber with Blanton Owen, Leonard Coulson, and Patrick Sauber. Disc One encompasses a performance at the Brewery Arts Center of the Nevada Arts Council in Carson City, Nevada in February of 1998, four months before Blanton’s death in a plane accident in Washington State and twenty years before Disc Two was recorded in Salt Lake City and Los Angeles.

The set booklet provides rich context for this project. Tom Carter’s narrative is the best and most thoughtful kind of reminiscing and reflecting. Judicious with each anecdote and reference, he uses those first booklet pages to set the stage for the sensory experience you’re stepping into, and make no mistake: it is a sensory experience. Beyond the simple but powerful album cover featuring Stanback branding, you find thirteen black and white photos taken from Blanton Owen’s archival collection. This small collection of photos is glorious in its simplicity; the emphasis on the musicians pictured indicates the love and admiration given to them by the one behind the camera, their feeling of comfort and acceptance in his company, and the respect that this project pays them. The respect doesn’t stop with Tom’s narrative or Blanton’s photos, though. Short narratives for each track on both discs put each tune and song in context, engaging the listener’s attention just enough to help envision the story and the feeling behind the music without distracting from it. But I am sure that you could not be distracted from this music if you tried. 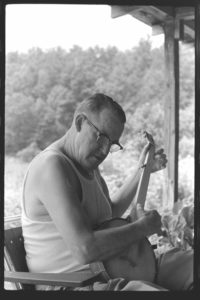 Two decades and three people separate one disc from the next. Leonard Coulson and Blanton Owen appear on Disc One but not Disc Two, on which Tom Sauber’s son Patrick Sauber steps in to take a well deserved place in the group. As I listen through both discs, which are separated by so much time and the presences and absences of different people, I can hear commonalities and differences. Although this set is unmistakably old time, there is no doubting its uniqueness. Leonard Coulson’s voice, in all its twangy, Neil Young-esque goodness sets the first disc apart beginning with track 2, a double banjo version of Diamond Joe. Coulson’s vocals take on a more foreboding tone on track 6, Well Well Well. Paired with Tom Sauber’s immaculate fiddling, this version of what was originally a Bob Dylan song makes a haunting case for environmentalism. I was delighted by the liner notes for track 7, Stay All Night. I am always amazed at how wordless tunes convey so much imagery. Doing fieldwork in my home region of the Upland South, I have deep appreciation for how Sauber’s steady fiddle/vocal combination invokes the song’s sentiment so effectively. Track 11, Little Carpenter, pays homage to the New Lost City Ramblers, who learned this one from a recording of Blind James Howard. Songs that narrate a story are so crucial to the folk process. Between Owen’s plunky banjo picking and Sauber’s vocals, this group makes the song their own while clearly honoring its origins. The fourteenth and final track of Disc One is the perfect cherry on top. Much like Little Carpenter, the Round Peak classic Sally Ann (affectionately known as the Surry County National Anthem) is a delightful group effort in which the subdued vocals do not override the spunky instrumentals. 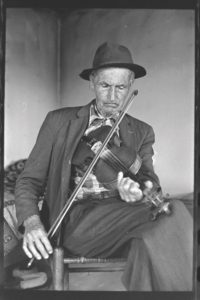 Disc Two brings us two decades into the future. Although Track 3 is called Old Bunch of Guys in a humorous play on words, the seriousness of how good it is cannot be overstated. Tom Sauber’s fiddling leads the way, and Patrick Sauber’s mandolin and Tom Carter’s low fretless banjo join forces to help carry the tune powerfully forward. Track 4, Massey Grove, is a unique take on Eunice Yeates McAlexander’s version of this old Appalachian ballad, which Tom Carter collected from her in the early 1970s; Tom Sauber’s lead vocal with Patrick’s harmony sets this tune apart, and Tom Carter’s low banjo is divine as always. A call-and-response play song, Track 5 (Green, Green, Rocky Road) is sheer fun. Tom Carter’s high banjo on Tracks 12 (Gaither Carlton’s You Climb the Mountain) and 13 (Dent Wimmer’s Never Miss Your Mama) is deeply and wonderfully reminiscent of the playing of the late Blanton Owen.

I had to ask myself as I listened: how did a musical project built up of so many origins, years, places, and people come to be a part of my life during a global pandemic, when I’ve never met any of these folks in person? At first, I had no answer. Then it came to me: community. Just as community with all its intricacies brought this music about and carries it into the future, so did community bring this project to fruition. For all of that, I am grateful.

Lindsey Terrell is an independent folklorist and writer from western North Carolina focused on the traditional music of the United States. Her current project is an exploration of how the old time music community has creatively adapted to the restrictions of COVID-19 using social media.

Trade Your Headache for a Smile (2-CD Set & Booklet)