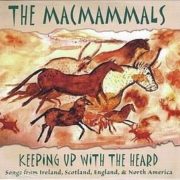 TITLE: KEEPING UP WITH THE HEARD 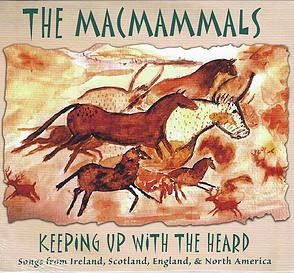 For those of us whose first musical love was traditional and neo-traditional folk ballads, the brand new debut album by The MacMammals provides a welcome, refreshing return to the simple beauty of this genre. Garnering songs from Ireland, Scotland, England and North America, Keeping Up with the Heard is authentic, acoustic, and moving; a collection of wonderful songs, tastefully arranged, while still achieving a very full, satisfying sound.

The MacMammals consist of the wife-husband duo of Carol Schryver-Bloom on lead vocals and guitar, and Ron Bloom on guitar, Irish bouzouki, mandolin and harmony vocals. They are accompanied by their producer, Paul Marshall, on upright bass; and on one song, by Sofia Chiavini on tin whistle.

The resulting dynamic is both intimate and powerful. Whether covering a timeless traditional tune like The College Boy or The Fox, or a modern-day classic like Darcy Farrow or Who Will Sing Me Lullabies, their sound is distinguished by Ron’s excellent, agile, multi-instrumental picking and Carol’s engaging alto voice. It is a voice that is at once strong and compassionate; one that draws you in and holds you.

Together, The MacMammals’ display an expert command of the folk idiom. This is evident in all thirteen tracks, but none more so than One More Time – the one original song by Carol Schryver-Bloom on this album. Truth be told, had I not seen her name on the credits, I never would have guessed that this delightful number was not a real old-time Irish traditional. It’s an excellent song, with a catchy melody and a sweet romantic story line, and it’s excellently played – including a tin whistle instrumental joined by Ron’s mandolin.

Another example of their creative flair – in keeping with folk tradition – is in Carol’s “slightly revised” lyrics of the opening track, a lovely ballad called The College Boy. Like many traditional folk songs, this ancient, hauntingly melodic tale has dozens (maybe hundreds) of variations – English, Irish and Scottish – reflected in almost as many different titles. I knew it in my early “folkie” days as The Trees They Do Grow High, but it is also recorded as Long A-Growing…The Bonny Boy…Young Craigston…the list goes on and on. The mutable quality of these ballads has been one of the hallmarks of folk music over the centuries.

But the gist of the song’s story has always been the same: It concerns the not uncommon practice in Medieval times of arranged child marriages or “marriages of convenience” (for both boys and girls). In this case, it is the boy who is the juvenile – just 16 years old (but “a-growing”) while the girl is already a young woman of 21. The girl at first protests this arrangement to her father, but soon learns to love the boy, and by the time he’s 17, they have a son. Then…at the age of 18….he dies.

It was a very sad song….until Carol Schryver-Bloom got a hold of it. As she said at a recent concert, she wanted to give the story a happy ending. So she cleverly changed the grass “growing” on the grave of the college boy to say “our house is steadily growing” – thereby perpetuating the “growing” theme that runs through this much-loved song while keeping the young lad alive.

Another stand-out track on the album is the poignant classic, Last Trip Home by Davy Steele. This nostalgic song celebrates the Muckle Horses – those gentle giants that pulled the plows – as it recalls the day when they were replaced by tractors. Sensitively played and sung by The MacMammals, and enhanced by great harmonies and Ron’s Irish bouzouki, this one will leave a big lump in your throat.

But Keeping Up with the Heard is filled with more than just “poignant” songs. Two of my favorites, in fact, are their upbeat traditionals. The MacMammals’ rendition of the popular traditional, The Fox, is one of the best I’ve heard, with Ron’s mandolin providing some jolly, fast-paced fun. And The Mermaid kicks the good times up yet another notch – even though this lively sea shanty is based on a fictional shipwreck. The harmonies, again, are good and tight – and Ron’s spoken verse, humorously quoting the cook (“I care much more for my pots and pans than for the bottom of the sea”) is a riot….especially his spot-on “ARRRRGH.” He must’ve gone to Pirate School for that one.

One final note of interest: The original artwork on the album cover was done by Carol and it’s really quite terrific – sort of a “nouvo-primitive” cave painting of ancient herd animals.

If you want to “keep up with the heard,” you owe it to yourself to listen to the MacMammals (available on cdbaby and their website,) . It’s a pure and simple pleasure.

A New York transplant to the tiny town of Carpinteria, CA, Jackie is a freelance writer and  singer-songwriter whose music can be heard on Pandora. Her third album of original Folk/Americana songs was among Top Folk Albums of 2011 on the Folk Music Radio Airplay Charts, and her new newly-released fourth album, Can’t Fix Crazy, is among Top Folk Albums of May 2014 as well as Top 100 albums of 2014  on the RMR Americana Country Charts.  Jackie is also an active member in such acoustic music communities as SummerSongs, SongMakers, and FARWest Folk Alliance.

THE MACMAMMALS – KEEPING UP WITH THE HEARD