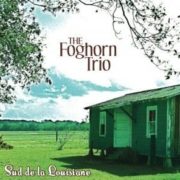 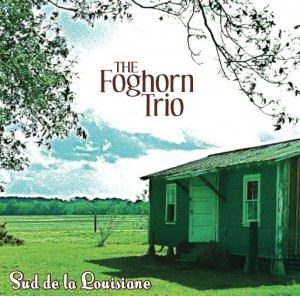 For a slice of bona-fide old-time Americana — or, as they describe themselves, the kind of “ass-kickin redneck stringband music” you’d expect to hear on some front porch in Appalachia in the 1930s — there is no better contemporary band than The Foghorn Trio. The Trio is an offshoot of The Foghorn Stringband, which has been together for ten years. Based in Portland, Oregon, with four albums to their credit, the up to 7-member band (depending on availability) has long been one of the brightest stars on the thriving Old Time Music Revival scene in the Northwest.

The Foghorn Trio is a distillation of this stellar group, comprised of founding members Caleb Klauder and Stephen “Sammy” Lind, and the recently-added French Arcadian bassist, Nadine Landry. All three are accomplished multi-instrumentalists and excellent singers in their own right. And they show it off accordingly: Klauder on hard-driving mandolin, fiddle, guitar and vocals….Lind on high-octane fiddle, guitar, banjo and vocals….and Landry on guitar, upright bass, and vocals. The result is pure joy.

Sud de la Louisiane is a delightful, rousing gumbo of Kenturcky bluegrass, Louisiana Cajun and Appalachian folk music, all played with a fervor that comes from real passion and respect for the music. Determined to keep traditional music alive and exciting, the Foghorns have recorded their tunes just as they were originally recorded: performing in unison around a single microphone. So, it seems only fitting that their debut album was recorded by Joel Savoy in his rural Louisiana studio – a converted cook shack that once belonged to his grandpa (depicted on the album cover).

The songs, however, go far beyond Sud de la Louisiane (which means “Southern Louisiana” in French). In truth, only the title track is of Cajun vintage, and is sung in French by Landry, who is French Canadian. There are covers of early Country classics like I Don’t Claim to be an Angel by Kitty Wells…hillbilly favorites like Hello Central and Let’s Be Lovers Again by The Carter Family…the moralistic, “stop-your-drinking” song, Go Home by The Smokey Valley Boys….and Doc Watson’s I’m Troubled….as well as an equal number of instrumentals, including Gentleman from Virginia, Liza Jane, and such rare old-time gems as Nuts and Bolts by Odie Griffith. In all, 14 tracks cleverly alternate the vocals with the instrumentals, creating a refreshing contrast between each song.

Of particular note are two original compositions by Caleb Klauder – one being a wonderfully hummable early Country-style song, Just a Little; the other, a fast-paced instrumental called Puttin’ Up the Wood. Here again, as in the case of Klauder’s recent solo release, Western Country, Klauder’s special genius becomes apparent. Klauder’s new songs immediately sound like “vintage classics,” just as authentic and memorable as the real vintage songs. They blend in seamlessly.

There is no doubt that The Foghorn Trio’s debut album will be a favorite among lovers of old-time country and fiddle music as well as bluegrass fans everywhere. It’s not trendy, not trying to be anything other than what it is: a re-creation of the mesmerizing sound of mountain music as it was first recorded in the last century, during the Great Depression. It lifted people’s spirits then….and it still works today.

A New York transplant to the tiny town of Carpinteria, CA, Jackie is a freelance writer by profession and a singer-songwriter by passion. Her newly-released third album of original Folk/Americana songs was among Top Albums on the Folk Music Radio Airplay Charts for July and August, 2011. Jackie is also an active member in such acoustic music communities as SummerSongs, SongMakers, and FARWest Folk Alliance.