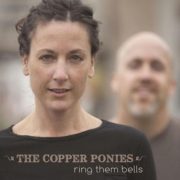 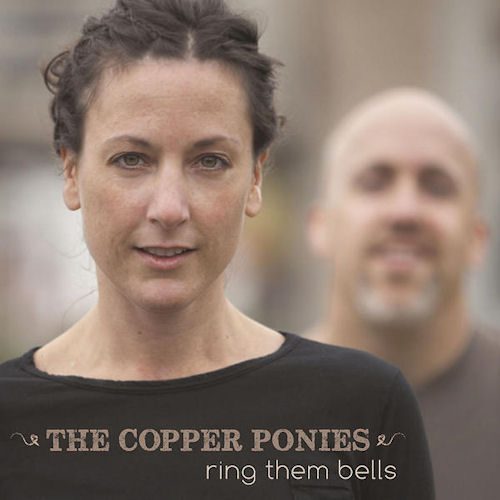 Every once in a while a duo comes along whose voices blend so wonderfully, so naturally, that the result transcends the individual singers, however talented they may be. Such is the case with The Copper Ponies.

The duo consists of Annie Donahue, a fresh new voice in the folk world, and Erik Balkey, a multi-award-winning, chart-topping singer-songwriter whose credits include over 300 songs and nine albums. And their debut EP, Ring Them Bells, reflects this exciting alchemy….resulting in, not surprisingly, a sound that is simultaneously fresh and well-seasoned.

The five “contemporary folk” songs on Ring Them Bells include both covers and an original (co-written) song, and serve to strikingly showcase the pair’s versatility, down-to-earth style, polished musicianship and instant appeal. But it is not the first time that Balkey and Donahue have written or sung together.

Balkey and Donahue first teamed up in May 2010, performing at the Barrington Coffeehouse in New Jersey, and have been singing together since. Most notably, they co-wrote the title track to Balkey’s newest solo CD, Everything is Great; Donahue harmonized on many of the other tracks, too – including several remakes of Balkey’s earlier songs – and the album quickly shot to the top of the Folk Charts.

But what distinguishes The Copper Ponies from Balkey’s previous album is that Annie Donahue most frequently takes the lead, with Balkey providing fits-like-a-glove back-up vocals. And her voice is simply beautiful…soft but confident, with an interesting “edge” or texture to it. Like Balkey, she has a natural gift for communicating feeling in music – a deceptively simple style that allows for a powerful emotional honesty. There’s no “drama” in her delivery – just a quiet sincerity and unaffected openness that speaks of a kind heart.

This allows The Copper Ponies to truly “own” the songs they cover….creating unique, inviting  interpretations of powerhouse tracks like Why Worry by Mark Knopfler, Last Train by Abigail Washburn &Kai Welch, Ring Them Bells by Bob Dylan, and If I Go by Gregory Alan Isakov, J. Wagner and John Elliott. And, of course, it is the same heart that allows them to bring out the sweet message of renewed hope in their original song – a beautiful duet called It’s a New Year Now.

While Ring Them Bells has an authentic, spare sound to it, make no mistake: The Copper Ponies have some profoundly talented friends on board with them. In addition to Balkey’s own mellow guitar, the arrangements feature such stand-out players as Joe Crookston on banjo, back-up vocals, and guitar…Dana Billings on piano…Tom Prasada-Rao on fiddle, bass, and electric guitar…Jimmy Heffernan on bass, mandolin, banjo, and electric guitar…and Tracy Grammer on fiddle…among others.

Every track is a winner, tastefully accented by these back-up artists, but always with restraint. However, there is one track in particular that simply knocks my socks off. That is the fast-paced, danger-packed ride on Last Train. Starting out with a simple, exciting guitar rhythm, the song gathers momentum as it moves along with the addition of Joe Crookston’s banjo and Cheryl Prashker’s brushes on snare drum, and features a fabulous mandolin break by Jimmy Heffernan. The lyrics are intriguing, the harmonies perfect, and you don’t miss a word thanks to Donahue’s clear vocals. It’s a song I could (and will) listen to over and over.

In short, The Copper Ponies is a group that we hopefully will hear a lot more of. And I am not alone in these feelings. Already, their album was among Top Albums of 2013 on the Folk Radio Airplay Charts…with Ring Them Bells charting #7 among “most played songs” and Last Train at #11.  Be sure to give this duo a listen and you’ll see why!

THE COPPER PONIES – RING THEM BELLS