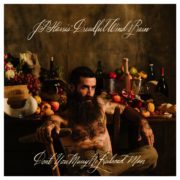 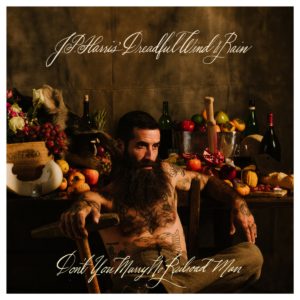 As a folklorist, I am deeply invested in tradition and history. As a young person who grew up in the age of information, I am equally as interested in how living tradition bearers situate themselves in modernity. J.P. Harris’ Dreadful Wind and Rain’s album  “Don’t You Marry No Railroad Man” from Free Dirt Records & Service Company provides a prime and dynamic opportunity to explore this nexus.

The first track, “House Carpenter,” gracefully sets the tone for the entire album, cementing Harris at the start of this musical journey as the gothic banjo bard that he is. The reverberating, vibrating nature of both his banjo and vocal styles as he sings and plays this song characterize him as a time-travelling balladeer with a plaintive style. While Harris has certainly harnessed that plaintive, bardic style, he has also mastered the jolly, jester-like sound that is ever-so-tangible in the upbeat second track, “Closer to the Mill (Going to California)”, which artfully distributes the listener’s attention equally between the banjo and fiddle. This seemingly intentional direction is reflected in Harris’ voice, which is an audible lovechild of the two instruments.

“Mole in the Ground” is the third track. Featuring Chance McCoy’s wonderfully resonant fiddling, it issues the album’s titular warning “Don’t You Marry No Railroad Man.” “Country Blues” tells the story of a man mourning his woes to a group of “good people.” The haunting musicality of this piece, befitting of its sentiment, might cause the listener to envision a stranger in a pub in the Wild West, buying everyone drinks and telling stories while plotting his own end and their role within it. Unlike “Country Blues,” “Last Chance,” a Hobart Smith tune and the fifth and shortest track on the album, features a bright, plunky tone that defies its foreboding title.

While listening to “Old Bangum” I found myself thinking of Irish musical traditions and again envisioning Harris as an unkempt bard travelling through time and space. This eerie track proves Harris to be a masterful storyteller, inviting us into the sonic atmospheres of medieval stone halls–something he has already done visually with the materially rich album cover. The classic ballad “Barbry Ellen” invokes a grungy, male version of Jean Ritchie’s version and offers a unique take on a classic that honors its heritage and many iterations.

The divine fiddling of Chance McCoy at the beginning of “The Little Carpenter” invites listeners into a particularly reflective frame of mind. This track speaks volumes for the spatially inviting, imaginative style of this meant-to-be musical duo. “Otto Wood” is a musically jaunty storytelling speed round, detailing the triumphs and trials of the infamous bandit. Although one might not consider the upbeat pace to be particularly exemplary of life-or-death conundrums, it is masterfully done, invoking the edge-of-your-seat nature of a thriller film. The final track, “Wild Bill Jones,” features more of Harris’ deep, rich banjo. His reliable but never boring signature sound reflects the mindset of the narrator, a man resigned to his fate.

In short, Free Dirt Records has done it again. This project brings together some of the best musicians in the business. It is not old time, it is not bluegrass, it is not country. Like Harris’ vocals – the standout feature of this album – it is at once both modern and ancient, timely and timeless. If you are invested in the sonic manifestations of these crossroads, give this album a listen.