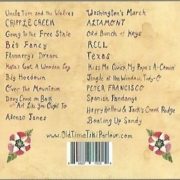 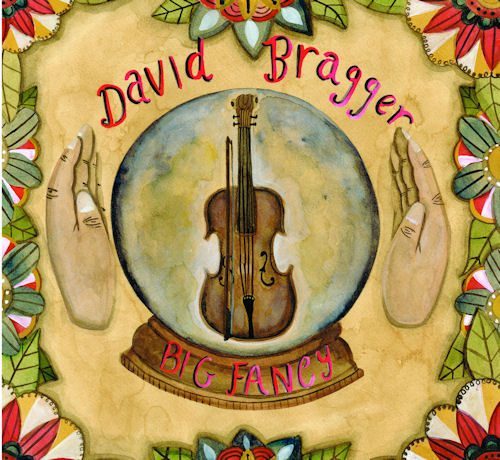 David Bragger is known in the pages of FolkWorks for his column, the Old Time Oracle. His attention to the intricacies of fiddle and banjo styles, as well as the backgrounds of the tunes, has attracted many students in the L.A. area. His students are an essential core of the old-time music renaissance. His Old Time Tiki Parlour has been releasing great CDs and DVDs of other musicians as well as hosting concerts with these same artists. His new CD, Big Fancy, features twenty-one tracks played on his great uncle’s fiddle and on banjo, and pump organ. He is accompanied by his Sausage Grinder bandmates: Christopher Berry on guitar and banjo, Susan Platz on second fiddle, and Timothy Riley on Scottish small bagpipes.

The CD starts out with a banjo/fiddle duet (both in unusual tunings) of Uncle Tom and the Wolves which is from African-American fiddler Will Adam. To find out more about Will Adams, check out the liner notes by Mike Seeger on Close to Home: Old Time Music from Mike Seeger’s Collection. Mike refers to him as a player of unusual tunes and of unusual musical sense. No wonder David is attracted to his tunes. 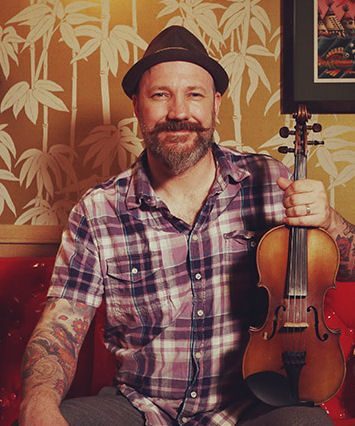 The tune Altamont is from the Tennessee African-American trio of Murph Gribble (banjo), John Lusk (fiddle), and Albert York (guitar). It was recorded in the 1940s and released on Altamont – Black Stringband Music from the Library of Congress. Altamont is a town in Tennessee, along the Cumberland trail. This band is featured on about half the tracks of the album. David plays it here on fiddle backed by Chris on guitar with melodic variations that succeeded in keeping my interest.

Fiddler Mel Durham, from southern Illinois, moved to the Los Angeles area after World War II. He was a major influence on the old-time music scene there and was also one of my mentors. I wrote an article about him with Carolyn Russell many years ago in the Old Time Herald. Mel’s influence on David is displayed by his playing of several tunes on this recording. Two tunes that Mel picked up from African-American fiddler William Alonzo Janes, are Alonzo Janes and Over the Mountain. David plays the first one on a deep sounding 5-string banjo and the latter with fiddle and banjo. Other tunes learned from Mel on this recording are Going to the Free State (aka Avalon Quickstep) and Jingle at the Window, Tidy-O, both of which feature two fiddles.

West Virginia master fiddler Edden Hammons is also a big influence. There is a two volume CD set called the Edden Hammons Collection issued by West Virginia University Press. David has culled a few tunes for this CD from the playing of Edden Hammons, including the title cut Big Fancy, as well as Big Hoedown, a slightly crooked three-part tune, and Washington’s March, a DDAD tune played with two fiddles and bagpipes.

David has also been influenced by contemporary old-time fiddlers such as Gerry Milnes (Flannery’s Dream) and Bruce Greene (Kiss Me Quick, My Papa’s A-Comin,’ a fiery Sammie Walker tune, and Jack’s Creek Ridge). The latter tune is medleyed with Happy Hollow which comes from the playing of Marcus Martin, whom David featured in his column Old Time Oracle back in 2007. 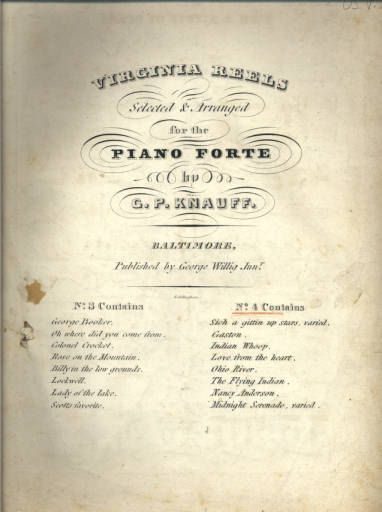 Here is a quick summary of some of the other tunes on this CD: Kate’s Got a Wooden Leg is Kentucky fiddler Jim Bowles’ version of Shortnin’ Bread. Davy Come On Back and Act Like You Ought To is from Kentucky fiddler Delbert Hughes. Old Bunch of Keys is from Tommy Jarrell. Texas is from Henry Reed. Peter Francisco was found by Tom Carter in the Knauff Collection. This is followed by a rousing version of Cripple Creek in cross G. There are a few other cuts that make this CD an interesting listen: A Cajun fiddle tune by Dennis McGee, just called Reel is played with two fiddles. Spanish Fandango has many sources. David plays it on banjo with accompaniment by a finger-picked fiddle. It goes from waltz time to a reel.

Boating Up Sandy comes from West Virginia fiddler Dave Bing with the addition of a droning pump organ to give it an ominous feel.

David’s fiddling is rhythmically powerful and precise, and his unusual arrangements on some of the tunes bring out interesting nuances. His bow and his fingers swipe and slash to get the sounds he wants. He is also a devotee of funky fiddling and banjo playing a la Dan Gellert and others. Listen to his Altamont for some of that. His accompanists also add a lot to the music. The word “wonderful” is an apt description of this recording, which warrants repeated listening to find all the treasures buried in the tunes. 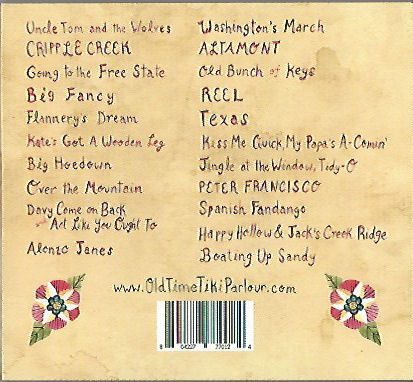