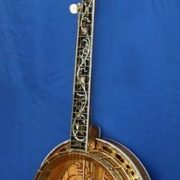 Reprinted from the Songmakers Bard Chord with permission 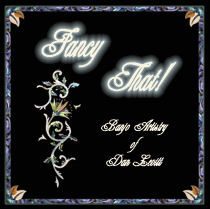 Forget the banjo jokes. If you’ve ever heard him play live, you know: Dan Levitt can make a banjo sound like nothing you’ve ever heard before. And this gem of a CD captures it all. With his debut CD, Fancy That! Banjo Artistry Of Dan Levitt, “the man with the golden banjo” has produced an amazing treasure trove of beautiful music, both original and traditional. On some of the tracks – if you did not know what you were listening to – you might not even realize it was a banjo!

Levitt achieves this sound with an instrument that is like nothing you’ve ever seen before, either.

A master craftsman as well as a classically trained musician, Dan Levitt worked on this 5-string banjo – on and off – for 25 years. Completed in 2003, it contains approximately 300 pieces of inlay, 800 pieces of marquetry, and numerous intricate carvings. It is, in itself, an incredible work of art.

But its perfection and intricacy is, truly, the least of its wonders. In the hands of its creator, this spectacular instrument has an uncanny number of voices. Taking the two-finger downpicking style (called frailing) to a whole new level, Levitt makes his banjo conjure up sounds of a harp, a sitar, a harpsichord, or a lute…as well as, of course, a traditional banjo. And his repertoire in Fancy That! displays a correspondingly wide range of genres – from delicate original compositions recalling classical pieces or medieval melodies to blues, bluegrass, and folk; from country, Irish, and old-time to ragtime and swing.

Levitt is joined by half a dozen other gifted musicians on this album, including Dennis O’Hanlon on guitar, bass and harmony vocals (with Bonnie O’Hanlon); Ross Levinson on fiddle; and Tom Corbett on mandolin. The tasteful interplay of their instruments – as well as Levitt’s occasional bowed bass or cello – weaves a rich, complex tapestry of harmony, counterpoint and texture.

In all, Fancy That! features 16 deliciously bite-sized tracks, most around 2 ½ minutes long, half of which are Levitt’s originals. All but two are instrumentals, and the vocals add a nice variety. Together, they provide a Whitman’s Sampler of musical styles. From exuberant traditionals like Whiskey Before Breakfast to haunting originals like Misty Morning, which sounds like something from the Middle Ages; from the bluesy, bouncy tune, Going for a Ride to the old Irish gem, Sheebeg Sheemore; from the just-for-fun Skeletons in the Closet to the ever-popular banjo classic, Eight More Miles to Louisville – every song is played with an exquisite precision that gives this album a unique, classical feel. It is, as Levitt says in the album copy, “the softer side of the banjo.”

In short, the ear never gets tired (as mine sometimes does when I listen to more than half an hour of intense banjo-driven bluegrass music)….because it is listening, in essence, to so many different instrumental “voices.” I don’t really know if this review can do this album justice, but the banjo artistry of Dan Levitt is, in turn, beautiful, fun, toe-tapping, elegant, engaging, and always…just plain amazing!

Fancy That! was released in January 2011. You can listen for yourself, as well as purchase a copy, by visiting Dan’s website.

A New York transplant to the tiny town of Carpinteria, CA, Jackie is a freelance writer by profession and a singer-songwriter by passion. She just released her third album of original Folk/Americana songs in May 2011 and is an active member in such acoustic music communities as SummerSongs, SongMakers, and FARWest Folk Alliance.