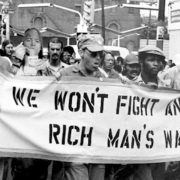 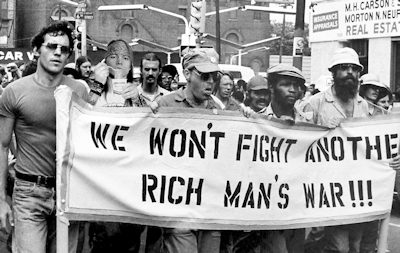 “As long as I am mayor of this city, there’s going to be law and order in Chicago.” (Mayor Richard Daley)

Fifty years since the turning point in American History that foreshadowed—if we only knew to look for something almost unimaginable—the Age of Trump. 1968 was the year both Martin Luther King, Jr. and Robert F. Kennedy were assassinated, within two months of each other; April 3 and June 5, though they each died after midnight, April 4 and June 6. It was the year when Paris reincarnated the original May Day during the Paris Commune—almost triggering a new French Revolution.  And finally, it was the year of the Chicago Convention—when the Democratic Party unraveled for the first time—and nominated a candidate who had not run in even one primary—Hubert H. Humphrey—stole the nomination from Senator Eugene McCarthy, who had run in all of them—and turned its dogs and police thugs on the demonstrators in the streets—and created the Chicago Seven—all of whom would go on to be vindicated in a court of law. All of these circumstances together almost guaranteed the election of Richard Nixon—the first president in American history to be forced to resign in office for violating the Constitution of the United States.

This turning point in our history has a soundtrack—which is why I write about it as we welcome the 50th anniversary of the year that changed America from a forward-thinking progressive vision of itself to a backward-charging herd of lemmings that culminated in the current US government—one with no feel for our history or institutions—or what the Founding Fathers had in mind when they declared their independence from England for a society that believed “All men are created equal.”

The first song on that soundtrack is Pete Seeger’s Waist Deep in the Big Muddy, which he sang on the Smothers Brothers Comedy Hour February 25. I told this story writ large in a separate article called “Waist Deep In the Big Muddy: How One Song Broke the Blacklist, Ended the War and Changed America.” You can read it at this link. Suffice to say that Walter Cronkite’s famous assessment of the state of the war, that led him to say in a special broadcast that the war was unwinnable, and that we were “mired in stalemate,” took place two days later, February 27 on the same CBS network he would have heard Pete sing his iconic song, the poetic equivalent of “mired in stalemate,” where he undoubtedly picked it up. It was after that broadcast that President Johnson concluded, “If I’ve lost Cronkite I’ve lost middle America” and announced his decision not to seek a second term. So a song can indeed change the world, because this one did.

Many songs were written in the aftermath of Dr. King’s assassination two months later, but the one that came to mean the most to the widest public and helped to make his birthday a national holiday was Stevie Wonder’s Happy Birthday, which evoked his ideals in the verses and sang “Happy Birthday to you” in the chorus. As a result of Wonder’s song the third Monday in January became the day to remember Dr. King—again, a song that changed the world. After hearing Wonder’s song President Reagan signed it into law November 2, 1981. Every time I hear it sung it takes me back to 1968 and the day we lost him to an assassin’s bullet:

You know it doesn’t make much sense

There ought to be a law against

Anyone who takes offense

At a day in your celebration

cause we all know in our minds

That there ought to be a time

That we can set aside

To show just how much we love you

And I’m sure you would agree

Happy Birthday to you

Happy Birthday to you

How a man who died for good

Could not have a day that would

Be set aside for his recognition

Because it should never be

Just because some cannot see

The dream as clear as he

That they should make it become an illusion

And we all know everything

That he stood for time will bring

For in peace our hearts will sing

Thanks to Martin Luther King….

On March 16, Senator Robert Kennedy reversed his earlier decision and announced his candidacy for the Democratic nomination, criticizing Johnson for his handling of the war. After the assassination, Bobby Kennedy too is remembered in song—the last verse with which composer Dick Holler ended his Abraham, Martin and John, recorded by Dion in 1968—fifty years ago.

Has anybody here seen my old friend Abraham?

You know, I just looked around and he’s gone.

I just looked around and he’s gone.

I just looked ’round and he’s gone.

Didn’t you love the things that they stood for?

Didn’t they try to find some good for you and me?

And we’ll be free

Some day soon, and it’s a-gonna be one day …

I thought I saw him walkin’ up over the hill,

With Abraham, Martin and John.

On the same date, in South Vietnam, Charlie Company (11th Brigade, American Division) entered the village of My Lai and killed over 300 apparently unarmed civilians. The American public would not learn about the My Lai Massacre until November 1969. (Source for these dates) Also in 1968, the day before the convention started, Soviet tanks and troops rolled into Czechoslovakia to crush the Prague Spring reform movement. In response to the Soviet tanks rolling into Prague on August 21, 1968, Anglo-American poet W.H. Auden (21 February 1907 – 29 September 1973) writes the following:

The Ogre does what ogres can

But one thing is beyond his reach

About a vast and subjugated plain

Among the desperate and slain

The ogre stalks with hands on hips

While drivel gushes from his lips.

This is what Auden was thinking about while Students for a Democratic Society (SDS) and Yippies were demonstrating, speaking and singing in Chicago’s Lincoln Park and Grant Park trying to get a little democracy at home. Among many others, Tom Hayden and Carl Oglesby, David Dellinger, Abbie Hoffman, Jerry Rubin and Rennie Davis spoke up for the liberal democracy being crushed by Mayor Daley’s police forces in the streets, and the Democratic Party machine in the convention hall on the very same day. Mary Travers and Peter Yarrow sang at the “Unconvention” to nominate Pigasus for president. Phil Ochs leant his powerful voice and protest songs to the marchers too, and would later testify at the trial of the Chicago Seven: I Ain’t Marching Anymore. Throughout the year folk singers and songwriters would amplify and testify for both the common people and extraordinary heroes who put their bodies on the line in front of barricades, police batons, assassins’ guns and rifles to resist the anti-democratic onslaught. How proud could one be to stand with them—as my father did during that convention—the best seat in the house? We face new challenges today, but certainly we can find some hope in their courage.

P.S.: British World War I soldier-poet, novelist, essayist, mythologist and author of the classic memoir Goodbye To All That and The White Goddess Robert Graves (24 July 1895 – 7 December 1985), took only one day off from writing each year—his birthday. I don’t have any bestsellers (like Graves’ I Claudius and The Greek Myths) so I can’t afford a day off. I am proud to say I wrote this column on the birthday I share with the author of the epic poem Paradise Lost, John Milton—December 9. With this 50th anniversary look back at 1968 and renewed hope, I wish my FolkWorks readers Peace, Good Will and a Happy New Year in 2018. ~Ross Altman

RSVP to: barb@noblehouseconcerts.com or call 818-780-5979 (Directions given upon RSVP). Contributions to the appetizer/dessert buffet appreciated.

Ross Altman has a PhD in Modern Literature from SUNY-Binghamton; he belongs to Local 47 (AFM) and serves as president of the Santa Monica Traditional Folk Music Club, going into its 40th year; Ross may be reached at greygoosemusic@aol.com