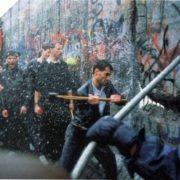 What Did Neil Young and Tom Petty Know
That the CIA Didn’t? 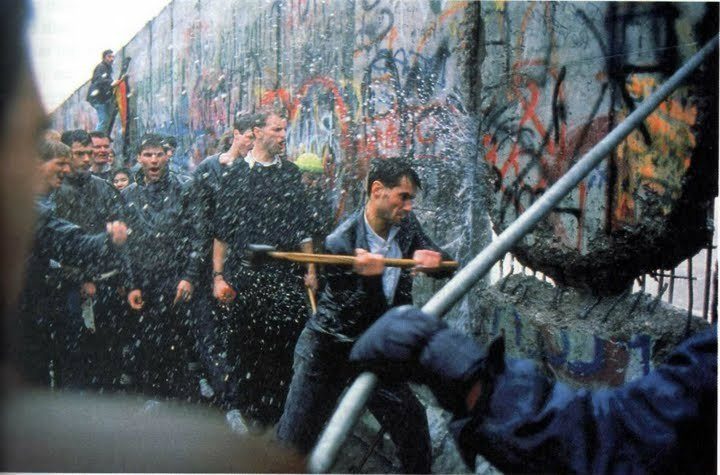 Five weeks before the fall of the Berlin Wall on November 9, 1989, Neil Young released his landmark album Freedom, book-ended by acoustic and electric versions of Rockin’ In the Free World. On its face it was a thinly veiled diatribe against the cliché’s and hypocrisy of the George H.W. Bush administration, contrasting his “thousand points of light” with a homeless man for whom they were invisible, and his “kinder, gentler America” with machine guns used to enforce it.

But the real enemy of freedom lay deeper and just around a bend in the road: only to become visible a month later, as on November 9 the Berlin Wall caved in to the demands of the German people who had been trapped inside since it was erected in August of 1961, fifty years ago this year.

But no one is celebrating the 50th anniversary of the rise of the Berlin Wall. No surprise there, but I thought it worth a mention that what the CIA had no clue of until it happened, Neil Young and Tom Petty, with a songwriter’s inchoate sense of tomorrow’s spiritual weather report, somehow managed to anticipate the emergence of freedom half a world away.

During the creation of Freedom, the ground was already shifting beneath the feet of other Communist regimes as well: on June 4 students in Tiananmen Square gathered to demand democratic reforms, and 3,000 of them were massacred for their audacity of hope; one lone protester came to symbolize the entire movement—a Chinese student who stood before an armed tank and, like Tom Petty, said I Won’t Back Down. Indeed, one observer has it that Neil’s song celebrating freedom was inspired by the protesters in Tiananmen.

The student revolt was reminiscent of another student protest that had drawn Neil Young’s attention, when four students were gunned down by the Ohio National Guard at Kent State in 1970, eliciting the song Ohio that CSNY put out in its immediate aftermath—an eloquent epitaph on Nixon’s campaign pledge of “peace with honor.”

Neil’s inspiring anthem Rockin’ In the Free World showed that when the chips are down he will Stand Up and Be Counted, another CSNY song from the last election. The song turns on a powerful ironic tension between the verses and the chorus:

Keep on rockin’ in the free world.

For the verses describe in heartbreaking detail a world that is anything but free: “people sleeping in their shoes,” “there’s a lot of people saying, ‘we’d be better off dead,’” a woman who leaves her baby in a garbage can before going to get a fix, an assault on the environment with “Styrofoam garbage for the ozone layer,” as we must have “fuel to burn/and roads to drive.”

It’s not a pretty picture, and yet out of this horror show rises Neil’s affirmation, “Keep on rockin’ in the free world.” It’s more likely to me that the refrain was meant as a Greek Chorus, a bitter commentary on the verses describing the domestic policies of the “read my lips: no new taxes” president. And yet Neil wrote better than he knew; for the chorus mysteriously transcends its political birthplace and does indeed become his ode to joy.

Tom Petty’s song (co-written with Jeff Lynne) I Won’t Back Down with the following lines:

Well I know what’s right, I got just one life

in a world that keeps on pushin’ me around

but I’ll stand my ground, and I won’t back down.

You can stand me up at the gates of hell

But I won’t back down.

was likewise released in this annus mirabilis of 1989, in April, just two months before that Chinese student made Petty and Lynne’s stubborn words a reality. It was the first single off Petty’s first solo album, Full Moon Fever.

Like a cat who can sense an incipient earthquake before it registers on the Richter scale, both Neil Young and Tom Petty had their ears to the ground and picked up on something deep beneath the surface, below the radar screen of the CIA, who didn’t find out about the fall of Communism in and about the Soviet Union until they saw it on CNN, much like 9/11 occurred in real time. Nor did they anticipate the democratic uprisings in China earlier in the year.

What I do know is that they were marching to the beat of a different drum, and were responding to the same questions Phil Ochs had presciently asked a quarter century before:

What’s That I Hear “a ringing in my ear

I’ve heard that sound before

What’s that I hear now ringing in my ear

I hear it more and more

It’s the sound of freedom calling

ringing up to the sky

It’s the sound of the old ways a falling

You can hear it if you try

You can hear it if you try.

Some songs are bellwethers of things to come; they should be marked Top Secret and require a security clearance to hear them, for they come from a place that is just beyond the tip of our tongue, and in the right place at the right time, they can unseat governments and change the world.

Rightly did Plato cringe at the power of poetry to shake the walls of The Republic. He knew they had to be banished to protect public order, the first whiff of fascism that has always squelched the impulse toward human freedom, and which great artists like Paul Robeson and Pablo Picasso have always opposed.

When a member of the Gestapo first saw his painting Guernica and asked of Picasso if he had painted it, Picasso replied simply, “No, you did.” So long as Franco ruled he refused to have it displayed in Spain; only after Franco’s death did Picasso have it returned to The Prado in Madrid, which was attacked 75 years ago this year.

When Woody Guthrie wanted to sum up his artistic credo he attached to his guitar one of the signs from a California defense plant during WWII: This Machine Kills Fascists.

When James Baldwin wanted to describe the role of the artist for a book on the National Center for the Performing Arts that would after the assassination be named for President John F. Kennedy, Baldwin wrote eloquently that the artist was “an inveterate disturber of the peace,” just as Plato had accused him of being. Only his attitude was the opposite of Plato’s; to the author of The Fire Next Time, Go Tell It On the Mountain and Giovanni’s Room, this was something to celebrate, not condemn. In defense of Angela Davis he would later write, “If they come for you at night, they’ll come for me in the morning.”

But no one defined the difference between East and West, or totalitarian regimes and democratic societies more acutely than novelist Philip Roth, who observed that under a dictatorship nothing is permitted and everything matters, whereas in a free country everything is permitted and nothing matters. That is why Chinese artist Wei Wai—a national hero for creating the birdsnest stadium for the Beijing Olympics—was arrested and imprisoned as soon as he began to use his art on behalf of human rights and be heard outside of China; the totalitarian impulse is always toward silence, and in every country at all times the artist is that person for whom silence is complicity, and complicity is evil. English conservative Edmund Burke said it best: “all that is necessary for evil to triumph is that good men do nothing.”

Neil Young and Tom Petty are therefore bearers of a proud torch, one that transcends usual distinctions between liberal and conservative, and in the pivotal year of 1989 showed that rock and roll represents the same threat to Plato’s Republic, Chinese Communists, Soviet Bloc authoritarians and American fundamentalists that southern preachers first intimated from the days when Elvis Presley was seen, like Socrates in ancient Athens, as a corrupter of the morals of youth. Had he been a philosopher he might have been sentenced to drink hemlock. Had it not been for Ed Sullivan he might have.

An unruly cousin of one of those southern preachers—the Reverend Jimmy Swaggart—answered Plato’s charge that music can shake the walls of the Republic and should therefore be banned Whole Lot a Shakin Goin’ On.

Long live Jerry Lee; and long may they run, Neil Young and Tom Petty; don’t back down and keep on rockin’ in the free world.

Ross Altman may be reached at greygoosemusic@aol.com On Saturday November 5 at 2:00pm Ross Altman and author Bill Adler will celebrate the life and legacy of Wobbly labor songwriter Joe Hill at the