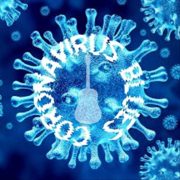 Pandemics, Music, and The Ties That Bind

By Art Podell (with an addendum by Mark Humphrey) 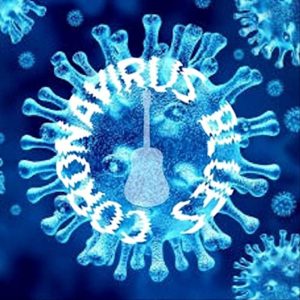 It is interesting to watch us music makers trying to wrap our arms around the Covid situation with our songs. Songs of hope, songs of togetherness. Some even humorous. I even wrote a stupid ‘Quarantine Blues’ way at the beginning, as we all tried to grasp the enormity of the coming pandemic. New songs continue to appear in my inbox each day. By and large these are all decent songs that inspire a sense that we’re fighting a dragon, albeit with the imaginary magic wand of music, trying to make something real that is happening into something almost fanciful that we can defeat with a wave of the hand or a guitar and some pretty words. Some of the songs are sarcastic, as if to throw the gauntlet down before this horrific beast that lurks outside our doors. Some, the songs of ‘we’re all one family’…you know…It’s easy to understand. We really are all one big family when tragedy like this hits.

Each time I open my email and see a new and valiant song of hope heading for the rocks of the reality we face, I wonder what it will take to keep those waters from breaching the dikes and drowning us. Even big-time stars like Ray Stevens have made us feel better. Here’s his take on matters:

Unknown folk artists galore have pitched in with their two pence:

We all know, or we should know, that this is not the first time that such events have exploded into reality. We faced a similar situation in 1918 that lasted until 1920 and beyond that. True, the world was different, and people’s lives were lived differently, but I think that human reaction and emotion has not changed much in so short a time as one century.

So, what was music like back then in 1918 and was a musical challenge issued from songwriters and singers similar to what is exploding on YouTube and the other media that bring us our daily tune? I began to explore:

In 1918, we were engaged in WWI and Americans were dying on the fields of Europe as well as in the cities. By some estimates, the world lost between thirty and fifty million souls to the Spanish Flu pandemic during those years. To date, worldwide losses to Covid-19 total approximately 1.3 million. US losses of life due to the Covid-19 pandemic are estimated to be approaching 300,000 people by some calculations.

I went on the hunt to find music about the Spanish Flu pandemic of 1918 that tore through our lives like a hungry tornado. Surely there would be some. After all, it seems a natural instinct for almost every singer-songwriter to offer something. A song. A poem. Something. True, we were at war so there were plenty of those. George M. Cohan had taken up the cause and he had given us “Yankee Doodle Dandy”. Songs like Over There. Patriotic songs to support the war effort and encourage the American boys fighting in muddy trenches in Europe and dying at the mercy of German bullets, poison gas, and grenades. I searched for songs about the virus that was killing Americans and Germans alike back then, as well as members of every other human nationality. I found some. The Spanish flu virus killed more humans than were killed in WWI and ended up killing a third of the world’s population. Here are two of my favorites. Below is an addendum, added by my friend Mark Humphrey, with a whole lot more.

I’m sure that music was important from household to household across the nation. Music is always important. It provides the backdrop for our very breath. In the cities, in the country, the music emerged and was played around the kitchen table, on the porch and around the fire. True, politics were different, yet the same, as the French say. Human life was different, yet the same and the spirit of the creative artist that has documented the heart and soul of every major event and still rides above tragedy and disaster and makes us feel connected.

Today, we still sing and play.  Our songs have become part of the fabric that stitches and binds one generation to the next. I wonder if when we’ve established our first colony in another part of our solar system or beyond that, if besides the high frequency light and sound transmissions, the music of the simple musician might not be the connective tissue that binds across the stretches of time and space.

Stay safe. Remember to tune your instruments. We’re all listening.

The following listing of pandemic and death songs was provided by my good friend and co-host of our KPFK FM Los Angeles show ‘Roots Music and Beyond’, Mark Humphrey. Copious thanks to Mark for his knowledge and especially for his guitar playing and singing at the end of this article:

St. James Infirmary has a long backstory going back to 18th century broadsides. It’s covered in the Folkways album The Unfortunate Rake.

The `parent’ song, about a sailor dying of syphilis, would variously become Streets of Laredo and St. James Infirmary and its sundry spinoffs such as Jimmie Rodgers’ Those Gambler’s Blues and Blind Willie McTell’s Dying Crapshooter’s Blues. Those songs had nothing to do with the Spanish flu.  Blind Willie Johnson referenced the Spanish flu in his 1928 recording Jesus Is Coming Soon, lyrics (and recording):

Elder Curry’s 1930 Memphis Flu is hard to decipher lyrically but starts with a reference to 1929, so it may be about a local outbreak a decade after the `Spanish flu’:

Here’s a song synopsis:  In 1929 people in Memphis are dying from influenza. Doctors say they will control the flu soon, but God shows his power by making them sick too. Influenza, “puts a pain in every bone/a few days you are gone/to a place in the ground called the grave.”

And here are a couple of ’50s flu songs:

Here’s the  background on that pandemic.

The plague-related folk song with the longest lineage may also be the best known, O Death, which became something of a hit when Ralph Stanley sang it in O Brother, Where Art Thou?

Here Waterson:Carthy sing an English antecedent, Death and the Lady, on the 2002 album Dark Light:

It’s speculated the song may have been born during the time of the 14th century Black Death.

For what it’s worth here’s my take on O Death.

PANDEMICS, MUSIC, AND THE TIES THAT BIND