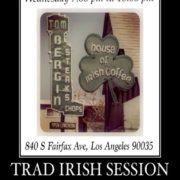 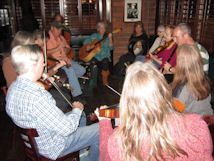 2014 started well for Celtic music In the Los Angeles area, with two new regular pub sessions filling in a desert between the San Fernando Valley and Long Beach. A pub session – or seisiún for those who like their Irish spelling – is a great way either to play or hear (and usually both) live music outside a stiff formal setting and nice to have two weekly sessions back in our area. Any type of jam session can be ephemeral and initial excitement wanes rapidly, but these two may have legs and be around for a while:

The first one is every Sunday night, starting at 7:30pm, at O'Brien's Irish Pub, 2226 Wilshire Blvd., Santa Monica. Easy parking and little traffic. The inside setup is ok because it becomes more of an aisle than a circle. But fits about a dozen players within that (misshaped) circle. No center table and limited space for your beer if you are in the musician’s circle in case that matters to you. As happened last night, consider spilled Guinness as a natural stain. Burger and beer special for $10 until 9pm, although I can’t recommend the burgers (I’ve tried them twice, different months, too). There is no official musical leader, but typically Steve O’Loughlin shoulders that responsibility and has members of one of his bands (the Praties) as a core to keep the music going. A strength of that session is diversity: There is a 50 year age gap between the youngest and the oldest regulars. I think that is a big plus as I have seen too many jams that became an “overweight white men in their 40s only” event. It is intimidating for anybody to go to a new session and not being an outlier helps.

The other session is Wednesday nights, starting a 7pm at Tom Bergin’s on Fairfax. This session is hosted by Mike Kelly of Sligo Rags and Padraic Conroy. Great space setup in the restaurant section, there is a big center table for musicians and additional space and other tables around them. Getting to Tom Bergin’s is an issue, though: It is weekday traffic and difficult parking within a few blocks of the restaurant. 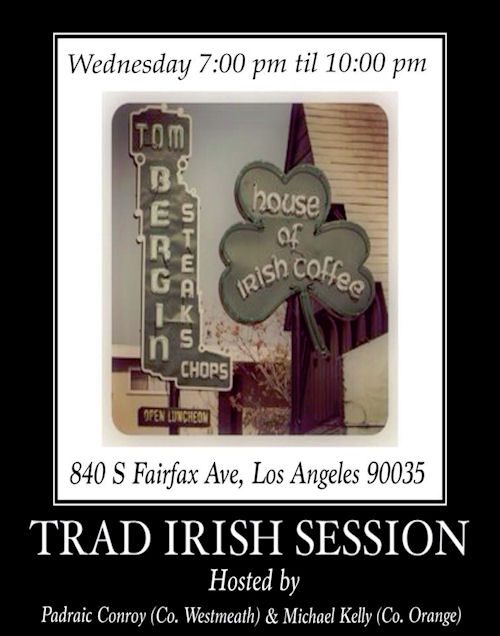 Both sessions are full speed with experienced players, no sheet music, and pub volume. It's largely the usual standards. Both like to have singers to do an occasional song. Melody player are always welcome, bouzoukis/guitars will need to coordinate with the existing players. Drums/percussion are another issue. The O'Brien session started off with too many people coming to whack on stuff. One competently played bodhran can be an asset, more become a burden; tambourines, bones, spoons, snare drums, high hats are usually destructive. The relationship between drums and sessions seems to be like the one between barnacles and ships.

The longevity of a session depends on musical factors and economics. A session can be an exciting and creative community experience or it can become an exercise in frustration or miscommunication. The latter arises when participants have different goals, backgrounds, or perceptions, which is more likely than not. Without a good leader or rotating leadership, this can quickly derail a project. As open-ended or free-flowing a session may look from the outside, it is more likely to be self-destruct than to self-organize. It should be a fluid and flexible setting, with different people playing (or singing, dancing) at various times and often sitting out. Making this work is much more difficult than leading a rehearsal or performance of a fixed group. Holding a session together and making it fun for most participants can become hard work. Add a few inexperienced players and it is much harder than playing a commercial gig.

Economics plays a role because pubs eventually are businesses. If things work well, it is mutually beneficial: the community has a new musical event, pubs get more customers. But it only works when a session sounds good to be at least as attractive to nonparticipants as the “open mike” or karaoke nights. That in turns requires strong musical leadership. A regular session needs core people to show up reliably, week after week, and take responsibility for getting it starting. That is not a trivial commitment. Just announcing a time and place fails quickly. There are different models, finding a sustainable one is difficult. One model is hiring core musicians to anchor the session every week, although that may not be financially worthwhile for the pub. Those sessions also have a tendency to turn into closed sessions or may just become a band performance, like all the others on the pub’s schedule. The other common model is comped drinks, sometimes even meals, to all participants, which is another iffy economic proposition that can cut down the life span of a session. Most people get more out of the session than they put in and should (and would) happily pay for their drinks, so they are the new customers that the session brings in.

Going to a pub session is not the only game in town. If you struggle knocking out reels at full speed, there also is a Celtic Slow Session organized by Lynn Stokes on the 2nd and 4th Sunday at 2pm in Santa Monica at Mt. Olive Lutheran Church, 1343 Ocean Park Blvd. That group relies heavily on fake books (King Street Sessions is their bible) and goes at a fairly slow clip. It is now in its second year. It essentially a continuation of the California Traditional Music Society jams after the California Traditional Music Society lost its building in 2012. This learning session is not the same thing as a pub session. Different format, different goals, different type of interaction. It is a good learning setting, but to get ready for pub session you have to be able to separate yourself from sheet music, follow some tunes by ear, be prepared for much higher speeds, and expect to be listening (not playing) much of the time.

In the San Fernando Valley, there are two fast sessions. Probably the oldest running session is organized by the Celtic Arts Center, Monday nights after 9pm, that might be going on for decades. There is another one on Tuesdays after 8pm at Timmy Nolan's Tavern, Toluca Lake. I haven’t been to the CAC session in probably a decade and never have been to Timmy Nolan's, so can’t say anything about them.