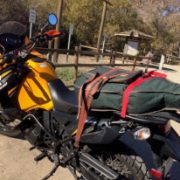 Get out more often: Play a smaller instrument and ride a motorcycle 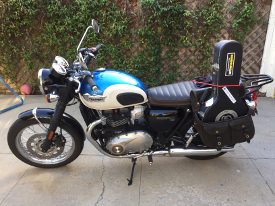 Getting around Los Angeles can be quite time consuming in a car; there are just too many of those. While I commute by bicycle (and ride it a lot otherwise, too), bicycles are not very practical for getting to more distant parts of L.A. Then I take a motorcycle. I don’t like sitting in a car and if going out would also require sitting in clogged traffic in a car, staying home becomes the dominant choice.

Upright bass used to be my main instrument for a long time, but I drifted towards smaller instruments over the last few years, something I can pack on a motorcycle without problem. This spring, I started playing fiddle regularly with the Scottish Fiddlers of Los Angeles and their practice is so far away that I probably would not be doing this if I had to drive. Getting to Pasadena from Santa Monica still isn’t fun and filtering through clogged traffic on a motorcycle is stressful, but at least it isn’t as aggravating as becoming part of the clog with a car. 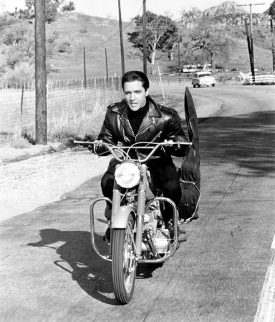 Apparently, the combination of two unusual activities – playing music and not driving a car – is bewildering to many people. It seems to be an astonishing feat that requires explanation in the 21st century. I am regularly asked about it, usually by total strangers. I generally don’t mind being asked unless people feel the urge to dispense unsolicited and uninformed advice on one or the other (mostly the other, something about motorcycles being dangerous). It wasn’t always like that, in fact, just about 50 years ago, having a guitar on a motorcycle was not odd at all. Here is historical evidence and not exactly an obscure musician at that time. As an aside, even though this was the 1960s in the U.S., he is riding a Honda here.

He apparently doesn’t have the same traffic problems as I do, but motorcycles are still faster than cars. Lane splitting (white lining, filtering) is operating a motorcycle in between rows of slow moving or stopped traffic while going in the same direction. So for those that like to provide advice (so it isn’t that uninformed): Lane splitting has been standard in California for decades and never was illegal. As of 2016, it even has its own law, although a very strange one as it only provides a definition and leaves it to the California Highway Patrol to develop guidelines; there aren’t any). Lane splitting/filtering is expected in many other places in the world, including most of Europe. However, in most other U.S. states, it is not legal and is not accepted by car drivers (that’s the problem, not the motorcycles). More dangerous than filtering through stop-and-go traffic is actually waiting behind a car because of getting hit by distracted drivers that fail to stop. So even when there is no way to get past cars, I try at least to pull next to cars in front of me to get out of the danger zones (I do that on a bicycle, too). UC Berkeley’s Safe Transportation Research and Education Center found that lane-splitting in California is reasonably safe if done in traffic moving at 50 mph or less, and if motorcyclists do not exceed the speed of other vehicles by more than 15 mph. 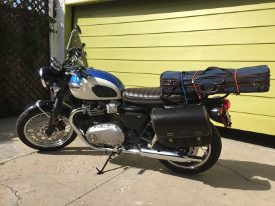 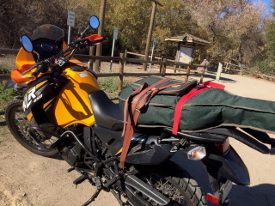 How to transport instruments? There are two other options without the saddle bag or side rack. I use both the passenger seat and a rear rack. Elvis’ solution with a low side rack is probably the best for a guitar. His rack isn’t very stylish, but more practical than what I can find these days. Even on the KLR (a physically very big motorcycle), the guitar neck sticks out well past the end. I have no problems with a mandolin or fiddle case. If you have other ideas/alternatives, let me know, I hope I’m not the only one in the U.S.!

Last week, my son was visiting and he had a lot of heavy luggage as he was moving. So I had to give him a ride in my car. He pulled off a bunch of cobwebs from the side mirror and the door and commented: “You aren’t using the car very often, are you?”

GET OUT MORE OFTEN: PLAY A SMALLER INSTRUMENT AND RIDE A MOTORCYCLE