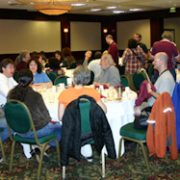 Festivals, Conferences and other Gatherings

By the time this reaches your inbox for this month’s issue, the 2019 Folk Alliance Region – West (FAR-West) Conference will be in the history books. I was invited to participate and was told I’d be receiving an award. In preparation for my acceptance speech, I thought about what I would say or do there, I tried to recall similar events over the years. There have been many – festivals, workshops, performances. Many musicians have been to them and some have left indelible impressions on us, some not. I tried to remember the first time I had attended a formal gathering of folksingers and suddenly an event that had been buried somewhere in my aging grey matter surfaced and the memories gushed like an old garage sink faucet that hadn’t been used for years. At first, rusty and sparse spurts gradually flowing to a clear stream.

I was a high school senior in Brooklyn, NY, and it was to be my first real folk music festival. I had firmly committed myself to singing folk songs and I was in the process of learning the repertoire sung by my heroes – Pete Seeger, Josh White, Burl Ives – those guys. The Cherry Song, The Eddystone Light, those songs. My room was filled with LPs, I had been sneaking out to Washington Square in Greenwich Village on Sunday afternoons courtesy of the NY City subway system, and marveling at the small but growing community of like-minded aficionados I had joined. When I was informed of this particular event, I couldn’t wait to go. A few months before, my mother had bought me a brand new entry-level Martin guitar at the Wurlitzer Organ Company store in Manhattan, the official Martin distributor in New York City at the time, and I was spending countless hours practicing in my room in our apartment house on Ocean Avenue. On the appointed day, guitar in hand, and with my parents’ permission, I traveled by subway and bus to a college campus in New Jersey where “my people” were gathering – a small army of youngsters, eager to soak up whatever was being offered. After all, Mike Seeger, Ralph Rinzler, Oscar Brand, my hero Dick Rosmini, and the folk gurus of the day were all slated to be there. And they had all dipped into the great fertile American songbook hidden in the hills of Appalachia, the plains of Texas and the bayous of Louisiana for half a century. Guitars and banjos in hand, we were there to receive the blessings of true American folk music.

There were song circles, mini-performances, etc. If you’ve ever been to one of these, you’ll know what I am describing.

One singular event rushed back to me. A large group of us were standing on a gymnasium floor and someone had introduced the Oh, Sinner Man, a song derived from an old blues recording. We, us newbies to the scene, had never heard the song and those dramatic chord changes hit us like a sledge-hammer. It was hypnotic.

Oh, Sinner Man, where you going to run to?

Oh, Sinner Man, where you going to run to?

Run to the rock, rock won’t you hide me?

As one by one, we found the chords and harmony lines, the chorus rose and fell like mighty waves as we stood on that gymnasium floor and listened to the echo of our choruses tumbling back on us.

Run to the sea, sea won’t you hide me?

All on that day.

E minor to D major, back and forth, over and over again…

…all on that day.

Time had stopped and we had become a family and I’m positive that every folksinger on that gymnasium floor was imagining him or herself singing that song to everyone they knew. I sure was. It was not someone’s trademark to own, not someone’s property, not someone’s meal ticket. It was offered as a gift to anyone who loved it. We embraced it unconditionally. It was as close as I have ever been to real prayer.

The freshness and the newness of those days and the music that nourished us, has folded into the great lexicon of our folk music tradition. Friends and families still gather in living rooms, back yards and parks and revive those songs, contribute new music, relive history and keep a tradition alive. I wondered what I could bring to the FAR-West Conference so that the assembled singer-songwriters, artists all, could capture some of that early celebration of the music itself just for the joy of being a part of it, singing and playing it, and perhaps even for just a moment in time, set the discussions about “the business” aside and enjoy the true reason we come.

FESTIVALS, CONFERENCES AND OTHER GATHERINGS