Start time where you are: Your time zone could not be detected. Try reloading the page.
$20.00 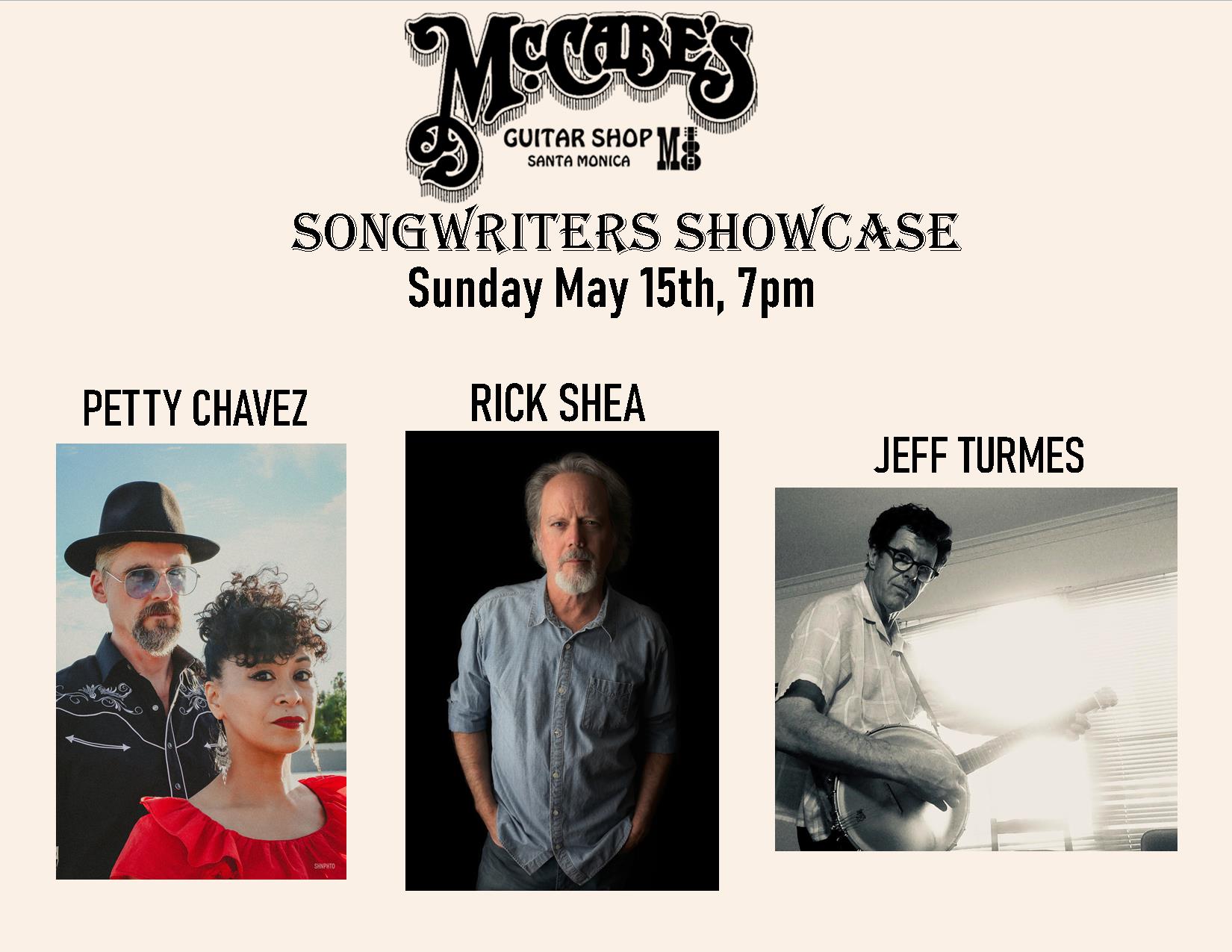 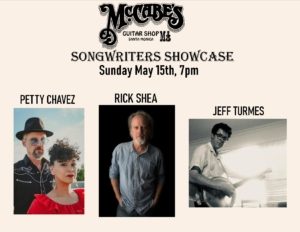 After an interruption in 2020 and 2021 due to the pandemic and Covid restrictions, McCabe’s, Los Angeles’ premier acoustic concert venue, is once again presenting a stellar lineup of shows and championing local talent. As part of that renewed focus on local artists, singer-songwriter and guitarist Rick Shea will host a Songwriters Showcase on Sunday, May 15, featuring respected artists Jeff Turmes (who has played and recorded with Mavis Staples and Tom Waits, among many others) and Petty Chavez (Simon Petty of the acclaimed band Minibar and Pink/Enrique Iglesias backup singer Celia Chavez). Turmes, Petty and Chavez are longtime Westside residents, while Shea lives in the San Gabriel Valley with his family.

All are friends and have been playing local shows together and contributing to each other’s recording projects for a number of years. Shea says: “One of my favorite things about Los Angeles and the music scene here is, even after 20 or 30 years, you can continue to meet people you have things in common with musically, and they’ll have a whole network of friends and people they work with that you haven’t met. It’s just so vast – I don’t know anyplace else like it.”

Each artist will play a half-hour set, after which they’ll all play a set together. “I’ve asked everyone to bring something they haven’t done before, a new song or one they haven’t played much, or maybe just a different arrangement or collaboration,” Shea explains. “The theme is buried treasure.”

Singer-songwriter and guitar master RICK SHEA’s work with Americana legends like Dave Alvin (Shea played on his Grammy-winning 2000 album Public Domain: Songs From the Wild Land), Chris Gaffney and Wanda Jackson, among others, speaks for itself – as do his many excellent solo records, including his latest, Love & Desperation (****MOJO). An artist of subtlety and nuance, Shea’s songs reflect the folk, country, rock and Mexican influences he grew up with.
rickshea.com, facebook.com/ricksheamusic, youtube.com/user/rickshea

PETTY CHAVEZ is Simon Petty (whose band Minibar first came to L.A. to record with T Bone Burnett) and Celia Chavez (backup singer for Melody Gardot, Enrique Iglesias, Pink), an acoustic singer-songwriter duo whose haunting vocal blend and evocative, intimate soundscapes tell their modern day love story in a timeless fashion.
“The chemistry between Chavez and Petty is undeniable, and few duos possess the talent and skill to maintain such an extraordinary level and equal ebb and flow of expressive exchange.”

JEFF TURMES is a singer and a prolific writer of distinctive songs that have been covered by a number of artists. He has spent many years as a touring and recording multi-instrumentalist, most notably a long stretch as bassist (and occasional guitarist) with Mavis Staples. His most recent release is 2017’s The Sun Never Went Down, a collection of songs written on five-string banjo.
jeffturmes.com, instagram.com/jeffturmes