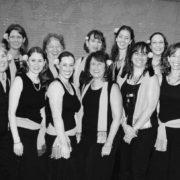 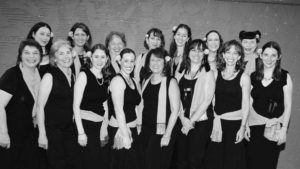 When first heard, the layering of voices wash over you, or perhaps, more accurately, permeates through you, pulsating, sometimes forcefully, at other times, almost pleadingly. The chorus en masse harmonizes and then altos underscore the refrain followed by the soprano section riding on top and then again the chorus weaves in with an intense drone. These hum-like intonations coupled with a degree of dissonance are not often encountered by audiences attuned to western melody and harmony. Still, the effect can be hypnotic if not almost haunting as each song displays another example of exhilarating vocalization presented within the context of a simple folk song.

The effect is heightened or at least contrasts with other forms of singing by the fact that many songs are sung without gesture or physical display. This places the entire focus on the purity of the voices. This is not to say that there is no emotion involved. All members radiate the joy of singing through very expressive faces, handclapping and “yelps” which accent specific upbeat songs. Other songs may include instrumental accompaniment by a band, or percussive augmentation and instrument playing by the choir.

This is Nevenka, an Eastern European Folk Ensemble of vocal enchantresses, who caress a song and then unleash their powerful harmonic blend. Nevenka (derived from neven – a marigold flower and a woman’s name common to many of the Balkan countries), is a female choral group whose seeds were planted in Los Angeles, back in 1976. Their specialty is bringing the folk music of Eastern Europe to the now open ears of the southland and beyond. They are rooted in the traditions of the songs, but arrange and sing the pieces with the style and strengths of their members. Nevenka is lead by Musical Director, Trudy Israel, who handles all arrangements along with singer and Assistant Director, Jennifer Jurick. However, all of the members contribute in different ways to make personal the songs they sing. Trudy offers some insight and reveals some of the magic behind Nevenka. “Each of our members brings something to Nevenka. Many of them teach and direct new songs or work on style and pronunciation with the group. I like it that way because we have many very talented women. Nevenka is democratic in that sense.”

Because the songs are sung in the country-of-origin’s language, (Russian, Bulgarian, Croatian, Greek, etc.), for English-speaking audiences it is the dynamism and uncommon sound of voice that provides the emphasis, carrying the lyrics and perhaps adding a bit of mystery to each song. “Exposure to world music has developed a whole generation of people who appreciate music with complex harmonies, dissonance and non-western rhythms and scales. I think part of the beauty of Eastern European songs is the way the words flow. When I hear an opera (European), I don’t want to hear it in English, I want to be transported to another place and time. I think it’s the same for Balkan music,” confides Trudy.

It is with this kind of music that one’s attention turns to the range and variety that the voice can produce. Nevenka’s sound covers a vocal array due to their broad repertoire of Eastern European folk music. Any number of individual voices may be showcased in solos and then blend with a “drone” in duets and chorus. You may experience Trudy’s rich emotive voice in an inviting and imploring solo on the Greek rebetiko song, Pos tha Perasi I Vradhia, followed by Jennifer Jurick’s transcendent solo in the starkly beautiful El Sueno de la Hija del Rey, a Sephardic tale sung in Ladino. When you hear these contrasts you begin to understand the scope of this type of singing.

Yet another dimension is demonstrated when a trio leads the ensemble through Ja Snoshti Xodix, a Bulgarian song exemplifying the vibrant drone consistent with and reminiscent of The Bulgarian State Radio and Television Female Vocal Choir known for their Le Mystere des Voix Bulgares recordings. These recordings introduced Bulgarian music to a wider audience back in the late 1980s. “One generalization about Balkan vocal styling, is that it should NOT be operatic, reminds Trudy. “Most of the traditional folk songs are sung in chest tones, even the soprano parts.”

There are other groups both here in the US and, of course, in Balkan countries, who sing similar types of music. And yet, there is uniqueness to the Nevenka sound. Trudy describes her approach to the music. “What I really like is the diverse styles of music we sing. We limit our repertoire to Eastern Europe, but there is a wealth of varied musical styles within each country and within the regions of each country. I think we do a good mix of roots music and composed pieces.”

She goes on to say, “In the past, we’ve tried to be as authentic as possible, drawing our arrangements, vocal styles, and instrumentation from original recordings, but authentic is sort of a floating definition when you look at the development of Eastern European folk music over the past several decades. With the advent of world music, the purists have had to put up with the fusion of vocal styles and instrumentation, while the non-purists have welcomed the new music coming out of these cross-pollinations. The advent of world music has allowed us to experiment and be more free with arrangements and instrumentation in recent years.”

The members that comprise Nevenka come from many ethnic and musical backgrounds. They also cover a wide age range. There is a very basic common thread that ties them together. Trudy elaborates, “The common thread that holds us together is the desire to make music out of the mainstream. We have a 30 year age range, but age does not seem to be a barrier. In Bulgaria, the village women used to have what they call “sedenkas,” which were working parties where women of all ages would sew, embroider, and sing together. I think of us that way, only the work is putting songs together.” She adds that, “When people audition for the group, we look for a few things. They must have good pitch, a strong chest voice, good pronunciation and most of all, they have to be nice. We have no Divas in Nevenka! Everyone is a team worker.”

To underscore the different backgrounds of the current line-up of Nevenka, Trudy revealed the “other” musical lives that some members pursue concurrently with their more traditional Balkan singing. “Many of our singers are in two or three performing groups, from Medieval/Renaissance to folk rock to Gamelan to bluegrass to Opera and even Gothic rap!”

The Balkans is comprised of many countries and within those nations there are many languages and even beyond that there are regional dialects. Trudy explains what it takes to learn a typical song. “A few of us danced and sang with the Aman Folk Ensemble and we were trained to understand the music we sang, both in style and tradition. Over the years, we’ve had many workshops from Slavic teachers. While we have only two ethnomusicologists in the group, another four or five members have been studying the music of these cultures for a number of years. We also have native speakers work with us on the words and pronunciation.”

Nevenka currently has three recordings available. The last, Reflections of Eastern Europe, took them in a slightly different direction than the previous two. Trudy explains the change in emphasis. “We had friends who played hot tamburica (Croatian string band) music so we featured more Croatian music then. Over the years, we’ve been drawn to more Bulgarian, Sephardic, Georgian, and Greek music. The type of music is often dictated by the members in the group (their vocal strengths and backgrounds).” Nevenka has performed in music festivals, auditoriums, churches, and even in local nightclubs where, as musical worlds collide, they continue to rise above, enlighten and surprise receptive audiences, their powerful voices embracing the traditions of eastern European folk music while expanding the boundaries of singing itself.

Nevenka can be found on line at www.nevenka.org where you can find out where they are playing or how to purchase one or all of there CDs. Joel Okida is a struggling artist, struggling writer, and struggling musician. It occurs to him that life is all about the struggle. Fortunately, he did not take up acting. However, he’s not half-bad as a zydeco dancer and the ability to make a mean gumbo and lovely walnut tortes has gotten him by.