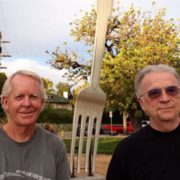 I want a star on The Hollywood Walk Of Fame! 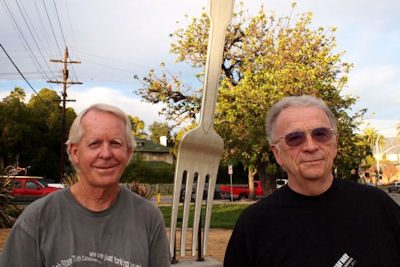 Bob Stane says….. Be impressed. I started these guys as teen agers in high school. This is what I do and I want my star on The Hollywood Walk Of Fame. Use photos as you please. Please label the one as….The Fork In The Road….the iconic Pasadena street art of Bob Stane and The Coffee Gallery Backstage bringing Christmas to all who need a giant fork of their own and for others who just want a nice meal. The Coffee Gallery Backstage has gathered about 10 tons of food for the hungry over the last 5 years. Maybe a lot more. We “do” all the charities it seems from animals, to hungry folks to Meals On Wheels. And we would, also, like to give away a lot more and support even more charities. All they have to do is ask.

We have taste, not booze.

Yes, for my 50 years I want a star on The Hollywood Walk Of Fame. Never been done for a club owner. I would like it for all the club owners who have slaved for a hundred years in Los Angeles for little recognition other that what they paint on the front of their clubs. And so many of them died in relative poverty and mostly unknown.

At least I got a giant Fork In The Road for my birthday (5 years ago). You saw the whole thing in the newspapers and on all the TV News Shows.

If you want Google…..”Bob Stane.” If you want more of the story of The Fork and all of its charities and good works….Google: “Bob Stane, The Fork In The Road, Pasadena, CA” It was a national story even featured with the 18 ton potato on The Today Show out of New York City. However, we are still the best kept live music secret in Los Angeles and we get less press than the clubs who would give their left arms to get, on occasion, the acts I book regularly.

If you want to ignore me as “that ranting curmudgeon” that’s all right. I am used to being either an afterthought or ignored.

However, in spite of my artistic creativity and amazing talent discoveries I feel I should not be entirely tactful and just lie in the weeds and not say there is recognition to be had out there and stories to tell.. We “Senior Types” get that way.

By the way, at The Ice House I auditioned 20,000 acts and hired everyone who “made it” on any level. Some of those who asked me for audition opportunities (repeat, they auditioned for free and by request) where David Letterman, Gallagher, Jay Leno, The Association, Cheech and Chong, Tom Waits, The Irish Rovers, Steve Martin, Gabe Kaplan, and dozens who made behind the scenes in the movies and television stars at The Coffee Gallery Backstage….28 of my performers told me they had won Grammies…not nominated….won. They had them on their mantles at home. That was 2 years ago.

Can you imagine how large that count would be now? At that cozy coffee house showroom in Altadena. 28 Grammies and they love The Coffee Gallery Backstage. One has to wonder why. Hmmm.

O. K. I’ve vented. I feel ever-so-much-better now. Send me a bill. I will not have to visit a professional therapist. Keep your charge low.

Thank you. Now I feel so calm.

Bob Stane: The Coffee Gallery Backstage is housed in a two story, solid concrete building where every tenant, upstairs and down, is “in the arts.” Dozens of them. We are all bunched together which makes us “dangerous” or “a target.”