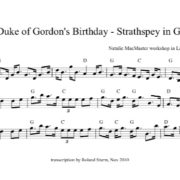 I just checked the slow session and the Cape Breton session facebook sites and both sessions worked on strathspeys for November 2010. That reminded me that I hadn’t covered a single strathspey yet, so let us continue the theme “well known traditional tunes recommended by professional players.” Here is a strathspey I learned from Natalie MacMaster recently. 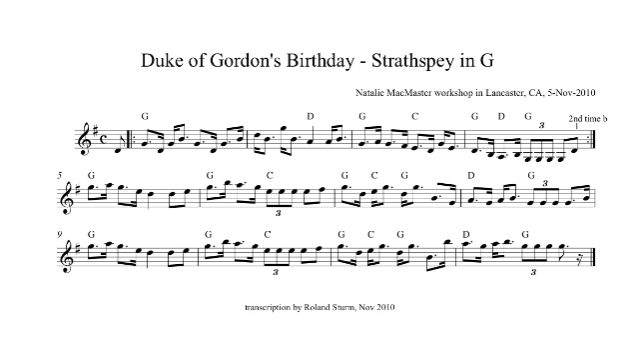 Natalie’s choice of tune is the Duke of Gordon’s Birthday. Oddly enough, she didn’t know the title, for her, this is just a melody. In fact, she claimed that she doesn’t know titles for most of the tunes in her repertoire, even those that she recorded (which is about 400 tunes or so). Finding titles and descriptions is a research task for whoever has to write the liner notes! In this case, it wasn’t hard to find a title because it was supposed to be a “classic” rather than an obscure tune. In fact, I had it on 3 CDs at home already, including a CD by Natalie and Buddy MacMaster (track 6), the Reel Thing by Wendy MacIsaac,  and Traditional Fiddle Music of Cape Breton: The Rover’s Return. Here is a clip I took of Natalie playing it, followed by my transcription

A strathspey is a dance tune in 4/4/ time of Scottish heritage (named after the Strathspey region of Scotland). There are some similarities to a hornpipe, but the defining characteristic is a Scotch snap, a very short 16th before a dotted 8th (it is more exaggerated in actual playing than in the notation). Strathspeys are known as highlands in the Irish repertoire (mainly in Donegal) and ubiquitous in Cape Breton music. In Cape Breton and Scottish tune sets, strathspeys are often followed by a reel. There is an interesting difference between Cape Breton/Scottish and Irish sets (combination of tunes played together): The former are likely to stay in the same key across tunes, but have rhythmic changes (from a march to a strathspey to a reel), the latter play the same type of tune (e.g. jigs) but change keys as they transition from tune to tune. For slower or intermediate sessions, nothing wrong with playing just a single tune. Bring this tune (or in a set with Primrose Lasses) to the celtic slow session or the Cape Breton session and you have some common repertoire.

A Strathspey with Natalie MacMaster