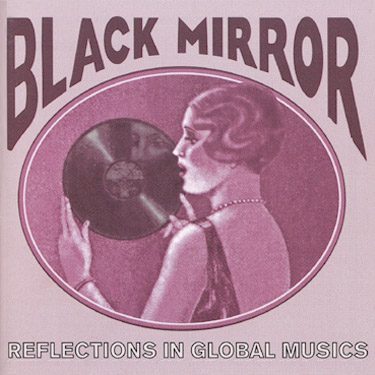 A BLACK MIRROR RESONATES WITH SONGS FAR AND ANCIENT

Once again, Dust-To-Digital (www.dust-digital.com) has delivered a kaleidoscopic ride into the other side of time: Black Mirror– Reflections in Global Musics. Pat Conte’s Secret Museum of Mankind series left me dumbfounded and wanting more old-time world music. Fortunately, we have Ian Nagoski, Baltimore record store owner/experimental musician. Nagoski is the curator behind this compilation of world music 78 recordings.

The sides were cut from 1918 to 1955 and represent many lands including India, Burma, Thailand, Java, Greece and Japan. Eighteen of the tracks appear for the first time as reissues in the United States. When initially asked to do the project, Nagoski meticulously created charts and graphs to outline “the human experience” while considering the appropriate cuts for the CD. He later adjusted the approach and chose his very favorite tracks culled from his extensive library of 78 records. It is a journey into the aural valley of shellac with its exotic pipes, Martian metallophones and holy fiddles. It’s sort of like hanging out with Ian Nagoski while he’s playing you his favorite 78s, but without Nagoski actually being there. Sounds like a wild time to me!!

In a sound interview on the Dust-To-Digital site he tells the story of “finding” the opening track: Kamanagah by Syrian Christian violinist Naim Karakand. This incredibly rare record was given to him by a 78 record collector. He pointed out the cracked record’s curious repair to Nagoski. Its grooves were realigned by microscope, stapled back together and coated so as not to harm the needle. The collector told Nagoski that if he didn’t like it, he “had to give it back.” He loved it. Soon after it tragically broke during a cold winter. He confessed to the collector friend who miraculously found another copy on eBay. Nagoski purchased it and soon after his shelf came crashing down destroying the second copy. A year later, this friend found a third copy of this rare gem and it thankfully survived for our listening astonishment. The violin dramatically imitates the zamr hornpipe, a conical single reed instrument common throughout the Middle East.

A noteworthy track features a 1928 gamelan performance, which is the firs

t Balinese gamelan recording made for commercial release. Kebyar Ding, I performed by Gong Belaloewana Bali was recorded under the supervision of German-national painter and intellectual Walter Spies. His story is as interesting as the music. In fact this gamelan track with its fevered and dynamic manipulation of metallic bells and gongs would make a great soundtrack for the retelling of Spies’ fate. Walter Spies moved to Bali, advocated Balinese arts, invited stars like Charlie Chaplin and Noel Coward to Bali, co-authored a book about Balinese performance, was imprisoned during a Dutch witch hunt for homosexuals, interned in Sumatra, shipped to Ceylon, bombed in transit, and left to drown despite orders to save him. Nagoski’s notes prove that 78 recordings often tell great tales beyond their recorded soundwaves.

Black Mirror also gives us teasers of early Burmese “sway” dance music, something I had the fortune of witnessing in Burma (Myanmar) a few years ago. The 1919 Uilleann pipe performance of Drowsy Maggie by Vaudevillian comic and musician Patsy Touhey is highly ornamented and charged with an ecstatic locomotion of trills. Film singer diva Lata Mangeshkar commandeers a sonic journey with Aayega Aanewaala, a supernatural theme song from the 1949 magical epic Mahal. But why go on? Buy this CD and let the sounds of far away places and ancient times seduce you this evening.

David Bragger is a Los Angeles-based instructor and player of old time fiddle and banjo music. He also photographs, films, and collects the lore of traditional artists, from puppeteers in Myanmar to fiddlers of Appalachia http://www.myspace.com/davidbragger

A BLACK MIRROR RESONATES WITH SONGS FAR AND ANCIENT