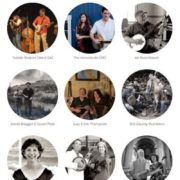 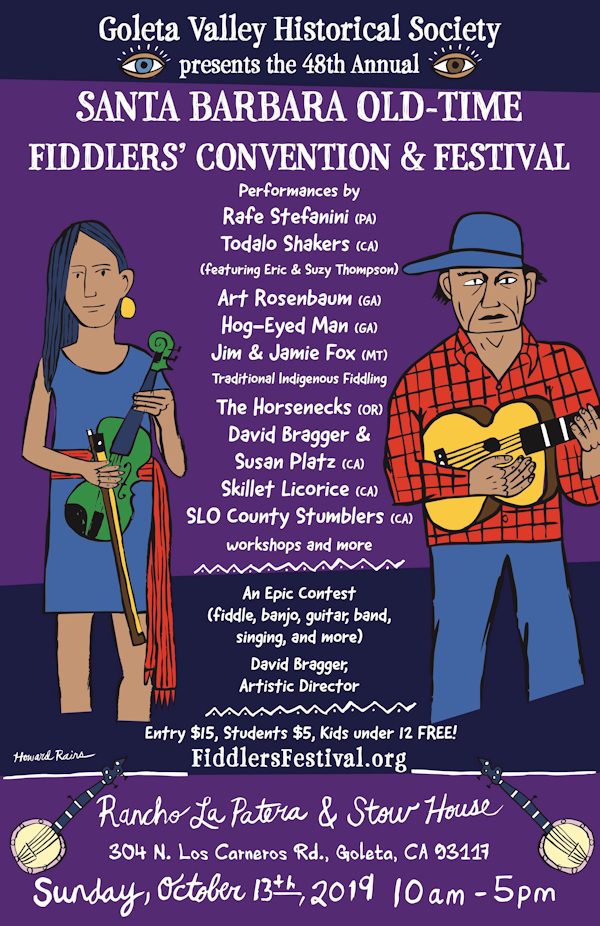 The Santa Barbara Old-Time Fiddlers’ Convention & Festival is upon us! Join us for one of the greatest and oldest, family-friendly traditional music festivals on the west coast. The official festival is on Sunday, October 13th and the official pre-festival concert is on Saturday, October 12th. This is my fourth year as the artistic director of this prestigious festival. Needless to say, I’m fired up to share these great festival activities and performers with you. You can now purchase inexpensive festival tickets HERE.

The Fiddlers’ Convention was founded 48 years ago by old-time/bluegrass musician and folklorist Peter Feldmann who envisioned a festival completely dedicated to sharing traditional music with the community. Nearly five decades later, it is still going strong, attracting musicians and traditional music lovers from all around the country. It’s hosted by the Goleta Valley Historical Society who strongly believe in preserving the history and living culture of old-time music. The festival will present performances and workshops with master musicians, hosted jam sessions, an instrument petting zoo, a raffle, folk art & music vendors, a pre-festival concert the day before and the “beating heart” of the festival itself: The Contest.

The contest’s purpose is not only to expose this music to all the musicians (and non-musicians) who attend the festival, but to help spread the music into the local community and beyond. This contest doesn’t have an aggressive competitive vibe at all. In fact, it’s quite the opposite. Musicians of all levels, including beginners, are highly encouraged to sign up and show their peers (and judges) what they’re playing and what they’ve been working on. It is truly inspiring to witness players of all ages and levels play the old tunes and songs of early America. Often spectators transform into musicians once they see how much fun the contestants are having.

On the Performance Stage, I’m so excited to announce that the great indigenous Métis fiddler Jamie Fox will be performing with her father Jim Fox. They will be performing repertoire that she learned while growing up on the Fort Belknap reservation in Montana, including many tunes from her late teacher. Enjoy the video below that I made with Jamie earlier this year. Old-time heavyweight Rafe Stefanini will be performing solo AND with exciting musical buddies of his. Rafe has played with many of the greatest old-time musicians throughout his career (Bruce Molsky, Mike Compton, John Doyle, etc.) and was a huge hit last time he performed at this festival with his daughter Clelia. We are so excited to have him back.

Georgia’s Hog-Eyed Man will performing their beautiful archaic fiddle tunes that have the power of mesmerizing any who listen. HEM’s fiddler Jason Cade won first place at the prestigious West Virginia Clifftop festival and his recordings with Rob McMaken have become hugely influential in today’s old-time scene. They’ll even be joined by the master Grammy award-winning banjo player/folklorist Art Rosenbaum whose albums, instructional books, field recordings and fine art have made him one of the living legends of old-time music!

Suzy and Eric Thompson will be returning with a larger band this year, Todalo Shakers. The Shakers play country blues and jug band music which will have you shaking in yours seats. Portland’s old-time duo The Horsenecks will be making their first appearance at our festival to kick things off right. They feature the multi-talented fiddle maestro Gabrielle Macrae and her banjo-picking partner Barry Southern. Barry will be teaching a banjo workshop too!

Throughout the day, there will be Hosted Jams by the wonderful staff of jam leaders: Jim Mueller, Joe Wack, Andy Denes, and Susan Platz & Pat MacSwyney. Additionally, there will be many other areas for impromptu jams to take place. This will also be the fourth year of the Instrument Petting Zoo where children and adults can try out instruments and see what makes them tick. It’s a great judgement-free area for people to get their hands on instruments with support and guidance from the petting zoo staff.

This year’s RAFFLE will feature an Enoch “Tradesman” banjo valued at $1335. I own a custom Enoch banjo and it is a work of beauty that plays like a dream. The festival is honored to have one of Kevin Enoch’s instruments for the raffle, since he is one of the greatest banjo-makers in the tradition. Eric Prust is donating another one of his tackhead fretless banjos too! Folk artist Angelina Elise has donated art and leather work to the raffle. May will recognize her distinctive style from several CD releases by the Old-Time Tiki Parlour label. Spring Fed Records will also be donating an assortment of CD releases from their prestigious catalog. Spring Fed Records preserves and documents the traditional music of Tennessee and the Mid-South region. They are one of the great traditional labels we have today. Old-Time musician and artist Howard Rains will be donating an original piece of art this year. Here’s your chance to own art from one of old-time music’s most popular folk artists.

The festival will also be offering instrumental and dance workshops to musicians and cloggers of all levels! We’re so excited to have more workshops than ever! See the schedule at the bottom of this page!

For those who spend the weekend in the area, the festival now presents an Old-Time Concert on Saturday the 12th from 3PM-5PM to get things started. It’s Free. This year’s pre-festival concert will feature the ripping central coast stringband SLO County Stumblers which is comprised of several central coast master musicians, including Nashville’s Casey Meikle! Art Rosenbaum will also play some of the old-time banjo tunes that he’s known for worldwide. The Bay Are-based ragtime stringband Skillet Licorice will be dishing out hot rags and hoedowns. My fiddle duo, David Bragger & Susan Platz, will also be playing on Saturday for those that love the beautiful sound of double old-time fiddle! 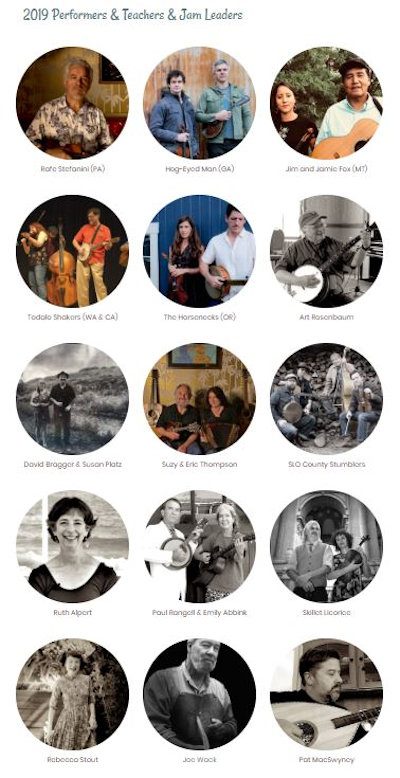 We rely on donations and sponsors to keep this festival alive since ticket prices are so low. Please consider donating to the Santa Barbara Fiddlers’ Festival HERE. This link will take you straight to the Goleta Valley Historical Society’s tax-deductible donation page. Scroll down to the PayPal link. When you donate, write “For Fiddlers’ Festival 2019” in the “special instructions” box in the last step. (You can always shoot an email to festival director David Bragger at davidbragger@gmail.com letting him know that you donated too!)